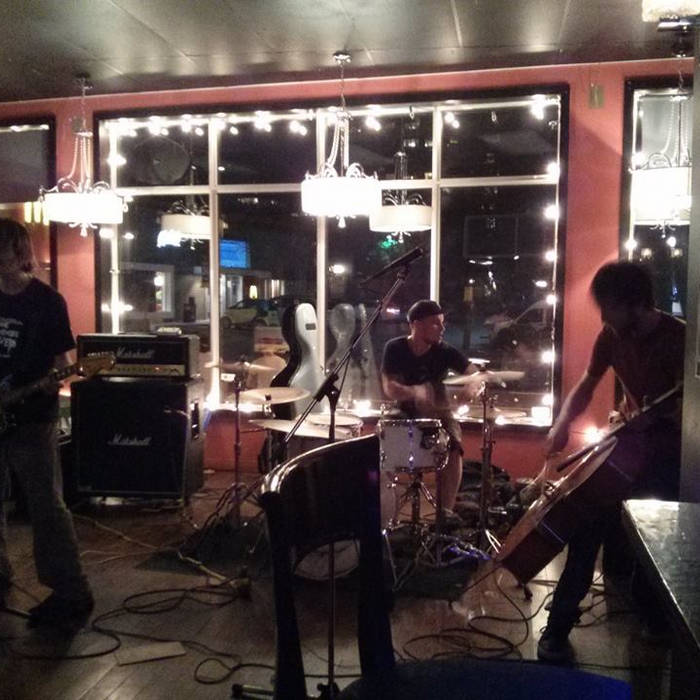 With a slow stretch for recent news, let's get our 75th monthly CD review on the site a little earlier than usual, as we're taking a look at defunct local/Toronto punk/classical trio RedD Monkey's third and final album "Opus 2: Untitled", marking our first RedD Monkey album review on the SMS! Posthumously released via their Bandcamp page on Sunday (complete with song lyrics), this album was recorded with producer/Infinity Grinder frontman Brad Griffith in the winter of 2012-13, and previewed at a Toronto concert in June 2013, but was never completed before the band went on hiatus early last year. Like on 2012's "All Baroque" (a.k.a. "Opus 1"), RedD Monkey are represented here by singer/guitarist Steve Mozarowski, his brother Pete Mozarowski on the cello & backing vocals, and Joe Bumbacco on drums, while "Mister" is credited for guest keyboard parts, and "Squid" is credited for lyrics on the last song, though neither's full identity is given.

"Opus 2: Untitled" was never officially completed, but it's nine finished tracks (running for just 23 minutes in length) can be bought on Bandcamp under a "name your price" model, and streamed free there too, but consider buying it to support their work, even posthumously! However, unless RedD Monkey gets back together down the road, I wouldn't hold my breath for physical copies. Now, let's begin our review of "Opus 2" with song #1!

The album begins with the curiously titled "Billy Corgan (On Aids w/ Heroin)", which seems to have allusions to personal conflict & uncertainty. Opening with Joe going to town on the drums, the song soon descends to RedD Monkey's aggressive late-era style (especially compared to songs on "Thought Control Tower"), with Steve using his voice well to alternate between hard-edged singing and yelling that suits the track, and Pete's cello adds a nice contrast to the anarchy! Among the band's heavier tracks already, it's fun and hard hitting, and would be great to mosh along with in concert! The second track is "Sparticus" (spelling intentional), a 29 second instrumental that keeps up the hard-hitting vibes of it's predecessor, but is way too short to really be effective other than as a bridge, and for all we know, may have been unfinished from it's original intended form.

It should be noted that the lyrics posted on Bandcamp for "Sparticus" say "Play backwards to hear a message from Satan", implying that they put some backmasked dialogue in it. When I played it backwards in Audacity, I did not make out any discernible speech, so that may have just been filler for that song's lyric section. Third is "Don't Care", which is basically about, well, not caring about anything, though there is an anti-environmental slant early that may some listeners may not like, that is if you take it seriously. Opening with dramatic cello work by Pete with drums slowly building up, the song soon jumps into fast paced punk territory, with Steve spitting lyrics in rapid-fire before singing choruses about how he once cared. Solid energy here (they at least cared about the song!), and this will definitely appeal to hardcore punk fans, but the song strikes me as a little unevenly paced.

Then we have "Johnny Silverhand" (the album's longest song), whose title character is from the RPG series Cyberpunk 2020, so knowledge of those games will help when following the lyrics. A slightly slower song with more of a chugging riff, I like the harmonizing between Steve & Pete on vocals, and the use of loudspeaker news announcements helps set the mood for the story, especially the closing ones, but part of me thinks that a song with a sci-fi storyline like this should sound a little tighter or dramatic. Still a quality song from RedD Monkey though! The 23 second long "Cold Day in Winter" is next, which is simply Steve plucking the guitar alone. There's even less here than on "Sparticus" (perhaps is it a fragment of a song they never finished?) but it is pleasant, and fittingly, it was recorded on a cold day in winter.

Sixth is "Todd", though the title isn't indicative of the lyrics, which are romantic & reflective in tone. Adding to the incongruity, the song itself is heavy and loaded with vocal distortion, with Steve hard to discern without the use of the provided lyrics. Personally, I find the distorted shouting to be detriment to the song, which works best in instrumental sections, as there's nothing drowning them out then. If RedD Monkey had done this with regular singing/yelling, it'd have worked a lot better, but as it stands, it's very uneven. A pair of instrumentals follow, with "SF '95" first (no word on the title's symbolism), and it has a nice steady drum beat from Joe to roll things out with before things get into their usual cello punk intensity, with Joe's cello fitting in well here with a catchy stop/start effect, as well as melodic stretches late. Whether vocals were ever intended for this song, I can't say, but it's a solid instrumental that showcases RedD Monkey's range!

The album's last instrumental (and penultimate song) is "Andromeda", which is a nice driving 43 second number that closes with a 37 second spacey section that does allude to the title galaxy, but it gives the vibe that this was a bridge to more that wasn't added. Not a bad little number though, it's at least on the level of "Sparticus"! The guest-wrote "Cane Toad Cocktail" closes "Opus II", with lyrics alluding to licking a poisonous frog and the aftermath of that choice. Possibly the most reserved song on the album, and more reminiscent in tone to their debut EP, the chorus (which is just the song title recited) isn't overly imaginative, but it's a pleasant number that would probably fit well in an acoustic setting, and it ends the album with some levity! So, what are my final thoughts on RedD Monkey's belated final CD?

Overall, "Opus 2: Untitled" is an uneven but satisfying release that puts some closure to RedD Monkey's run after abrupt fade into inactivity last year, and the guys are on form from past recording sessions and concerts! It definitely feels like the sequel to "All Baroque" in style, continuing their faster and heavier sound with strong cello work from Pete Mozarowski, steady and fast drumming from Joe Bumbacco, and diverse, edgy vocal & guitar work from Steve Mozarowski! I really enjoyed the early songs with vocals the most (especially "Billy Corgan" & "Johnny Silverhand"), but at times, you can tell that this album was incomplete, especially from the presence of four instrumentals (three at 80 seconds or less), especially when they'd only released one instrumental on an album before ("Dr. Fatty" on "All Baroque".) Had the sessions completed as planned, we may have seen those songs fleshed out, or perhaps absent songs included in general.

I also wasn't a fan of the excessive vocal distortion on "Todd", and some songs lacked polish from older releases, but at least we got "Opus 2" in this form rather than not at all, and the online release of it was a welcome surprise! Kudos to Steve, Pete, and Joe for finally putting this online, and hopefully RedD Monkey come back at some point! ! Stream or buy it at the above links! For our next CD review on the site, it's extremely likely that we'll be reviewing "Fed Up!", the three-way split CD from Destroilet, Jack Spades, and Montreal's The Ripcordz, as that album will see it's long-awaited release on October 24th at it's CD release party! However, in the event that personal family matters intervene (the same ones that have slowed down my concert frequency of late) and force me to miss the show and/or not get a copy, we would bump it to November and review a different CD in October, but I hope it won't have to come to that. In any event, stay tuned for more next month, and for weekend concert previews tomorrow! Thanks everyone!
Posted by The Sault Metal Scene at 3:44 PM