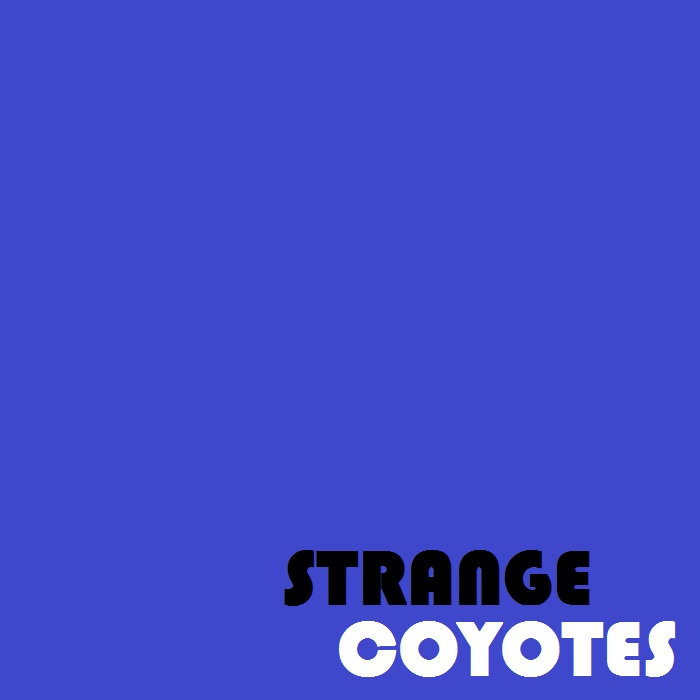 It's now time for our 80th monthly CD review at The Sault Metal Scene (and first of the year from a Sault Ontario band), as we're looking at defunct local experimental/improv metal trio The Strange Coyotes' posthumous second & final album "Strange Coyotes II"! Surprisingly released on February 16th through PaperClip Productions, this album is the delayed realization of plans to record & release a live album from their final concert at Sault Band-O-Rama at The Primavera Banquet Hall on November 21st, 2014, with six posthumous filler tracks recorded earlier this year at PaperClip Productions. The album features singer/bassist James Watterworth (a.k.a. Delusionair Lionhair), drummer Mike Haggith, and singer/guitarist Chase Wigmore on the first five full songs, but he had to drop out afterward due to illness, and was replaced by Crucify the Whore mainman Tyler "Ringsnaps" Gibson (who played the same concert with Rotopsy) on guitar for three songs. As well, all but one of the filler tracks feature Mike alongside his former Haggith bandmate Jordan Leach as a guest performer.

Physical copies can be bought through the label for $5, while digital copies are available on a "name your price" model via their Bandcamp page, but support the band and consider buying a copy! With 16 songs running for about 33 minutes, let's kick things off with the first song, "Kaylore"!

Starting with a fun improvised bass solo from James, this is a familiar song from his own solo concert sets, with the band in their usual freewheeling funk/metal style here! Featuring a fun sing-along chorus and a swing-ish rhythm, it works well in this live recording, which was well done at the soundboard to capture minimal background noise. James' falsetto vocal moments don't come through as clearly on the choruses here like they did live, but everyone's on form musically, with Chase laying down some solid guitar riffs and licks, and Mike keeps up well on drums, adding up to a solid and fun start to the album! The first filler track, entitled "Bolvine Warp Speed", is next, and it transitions from low, cow-sounding effects to comical dialogue from Mike & Jordan, with other sounds thrown in for good measure. There's not much to say here, but at 54 seconds long, they definitely didn't waste that time!

Third is "Slap 'N Tickle" from the concert recording, and it's an up & down number with effective instrumentation from the guys, especially in between the choruses, showing nice creativity on the fly on the guitar & bass, as the title would imply! However, the vocals (I believe from Chase) aren't overly loud in the mix until he starts yelling late, and the chorus instrumentation seems a little up-tempo compared to the improv-funk that surrounds them. That's followed by "Change", which has a bit of a blues influence on this James-sung number that has some heavy chorus work, melodic jam guitar, and nicely paced drumming! I think the low vocals sound a little forced at times, and the words aren't as clear here as they could be, but you get more of a sense of James' singing range here than on "Kaylore". It's arguably the heaviest song yet on "Strange Coyotes II", and it's a nice sampling of the three guys in their element!

Song #5 is the second filler track, "Shepherd's Pie Stew", which is just five seconds of what sounds like backmasked & filtered dialogue, plus other effects. If there's a message here, I can't detect it, but given it's length, it still doesn't add much to the CD. Next is an 83 second "Sax Jam" from the Band-O-Rama event, with James breaking out his saxophone for this number, which is largely an instrumental aside from random screams. It's fun for it's length, and has a clear energy, but I have to admit, the saxophone isn't all that loud here. The third filler track is next, entitled "Swallowing Band-Aids", and it continues the odd experimental tone of the first two, with random instrumental segments, sped up vocalizations, and background effects running for 35 seconds. It's not boring, but it's very hard to explain in detail (in other words, it fits with the other fillers!)

The eighth track on the album is "I'm Gonna Love You", another import from James' solo repertoire, and it turns out well in a full band form, with his bass plucking and Chase's strong guitar soloing meshing well! It has a catchy rhythm, and Mike's mini-drum solo at the end is a nice touch, but the lyrics could be a little more diverse, and the song seems to go by a little fast compared to how I recall it from concerts I attended. Still, this is a solid number, and effectively fills things out in the process! Another 2016 filler track is next, that being "Townhouse Seven", which features multiple recitations of "Townhouse" over some guitar instrumentation and added effects, running for 31 seconds. Another peculiar addition to the album, but again, it's not boring!

Tenth is "Best That You Can", which also comes from James' solo sets, and marks Tyler Gibson's first credited appearance during the set/album after Chase had to bow out. He mostly provides some guitar noodling to bookend the song, but it holds up well as a mid-tempo number with a catchy cadence.and It isn't the heaviest of James' own songs, but it's a solid sing-along track all the same! Then we have "First Time Donor", which is more of a straightforward jam rocker that has a bit of a Sykotyk Rampage feel at times, and involves Tyler more on guitar than "Best That You Can" did. It doesn't have as much of the freewheeling feel that the songs with Chase had, but it's a steady rocker with a nice driving riff and some solid jamming from the three, and it has potential if cleaned up a bit!

The album's second-last song from The Primavera Hall concert is "Sneeze", which is also a fan favourite solo original from the Delusionair himself,  and is also the longest song on "Strange Coyotes II". More than any song yet, this largely comes across as a solo performance that Mike just happened to be guesting on, with no discernible guitar input from Tyler here. I don't know if James ever plans to release a solo album of his own, but this gives a nice glimpse of his creativity and bass talents, with the song rarely sticking with one sound for too long, and while guitar would have filled it out more (not to mention clearer vocals), it holds up for fans! The curiously titled "Somewhere on the Ship of Mutant Moon Cows in the Slop" comes next as the last of five filler tracks involving Jordan Leach, and it features random pitch-shifted dialogue and randomness that will leave you guessing, even at 24 seconds! 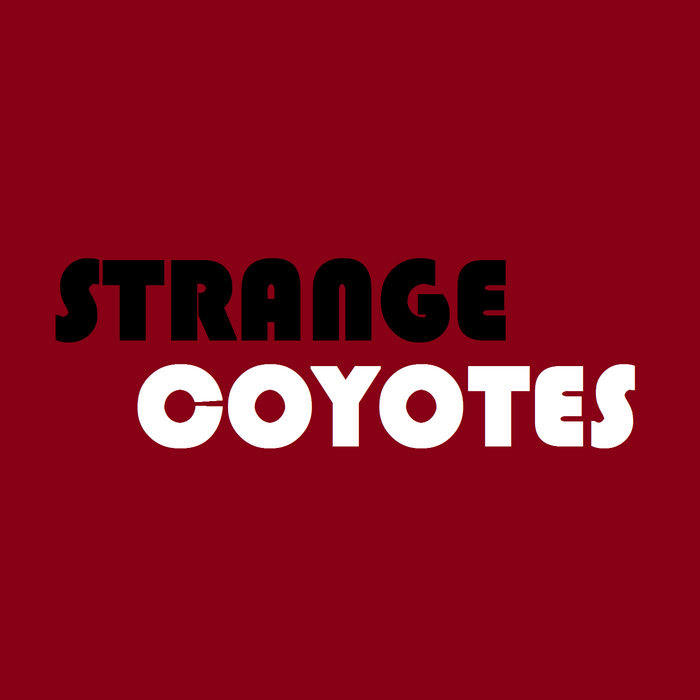 The last filler track, entitled "Weird Wolf" (apparently from Mike solo) follows with a 64 second stream of consciousness of effects, random vocals, and backmasking, though here, I can actually discern clear words when this is played in reverse with Audacity (though the track doesn't make a lot more sense than it does in regular playback.) The live concert portion concludes with "Colourful Daydream", which features James, Mike, and Tyler going into a doomy jam style with a relatively intense chorus, strong guitar improvisation, and a good & steady drum beat to fit the proceedings. It's not as chaotic and random as the songs with Chase, but they came through to end their set in a solid fashion! The album closes with "The Worst Band", which basically amounts to their concluding remarks at the end of their Band-O-Rama set, complete with some self-deprecation. At just 16 seconds, it doesn't really stand on it's own, so why not just combine it with "Colourful Daydream"?

So, what are my final thoughts on The Strange Coyotes' posthumous live album? It's a little uneven, but it's an entertaining look back at this fan favourite trio that definitely broke up too soon! Compared to their 2013 debut (which featured new studio originals), this features songs that are more familiar to fans from both their own and James' solo concerts, obviously so given it's a live album, and it has extra familiarity on that basis. Everyone performs well, with James Watterworth showcasing his bass skill and vocal range, Chase Wigmore performing strongly with some creative guitar solos and riffs, and Mike Haggith holding up his end of the bargain on drums! The recording quality is solid too, but the vocals could often be either low in the mix (as was James' saxophone), or not all that clear when trying to make out lyrics. While the Chase half holds the album's best overall moments, Tyler Gibson admirably filled in late, though it'd have been interesting to hear him on "Sneeze" or with some more vocal input.

The six filler tracks, on the other hand, are entertaining in a bizarre sort of way, but they just feel like an exercise in filling 5 minutes of an album while being random for the sake of being random, and interrupt the flow of the otherwise live album that we have here. Overall though, the live songs give us a strong sampling of The Strange Coyotes from their 2014 reunion, and they hadn't lost a step at the time! Fans will definitely want to check this out, and you can do so at the above links! I hope you guys liked this month's CD review, but what's on tap for March? At this point, I'm unsure, but be sure to check out this month's "Where Are The New Albums?" post on Wednesday for a sampling of upcoming metal, hard rock, and punk albums, as you never know when one might come out! If nothing new is released, I'm leaning towards reviewing either Haggith's "Apocalypse II" or "XIV" (to tie in with members' shows next month in their current bands) or Integrated System of Machines' self-titled 2015 CD (to tie in with Chris Leask's shows with Highway 63.)

Be it Haggith, I.S.O.M., or something new, look for our next CD review next month, and for more news, notes, updates, features, and more as we begin the month of March! Thanks everyone!
Posted by The Sault Metal Scene at 12:00 AM