The Ghost Of Chase James Wigmore - "Songs To Punch Yourself In The Face To" Album Review!! 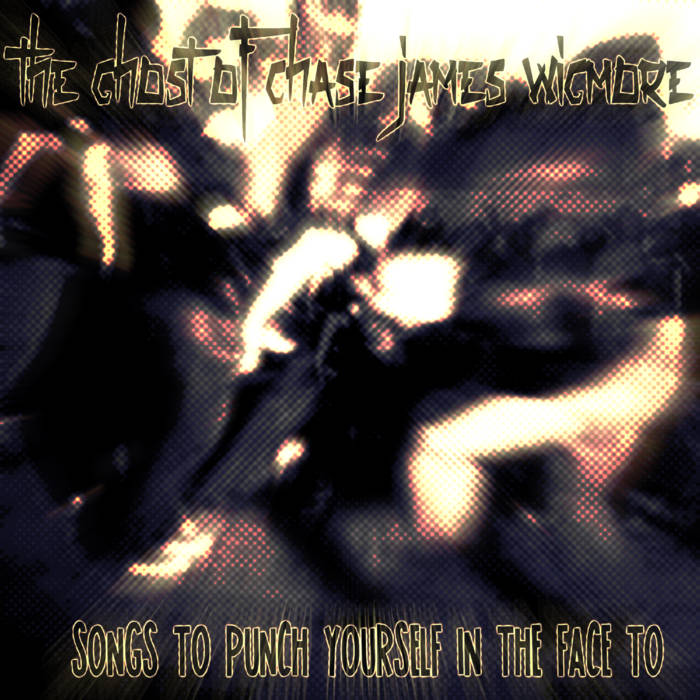 It's now time for our 126th monthly CD review at the Sault Metal Scene, and final one of both this year & the 2010s, as we're taking a look at prolific local folk punk/experimental solo musician Chase Wigmore's debut (non-demo) full length solo album "Songs To Punch Yourself In The Face To"! The first and best hyped of his two December 2019 releases (both as billed to "The Ghost of Chase James Wigmore"), this was independently released to his Bandcamp page on December 7th, and while a hyped CD release show on Devil's Night never occurred, the possibility still exists for the album to see a physical release in the future. Featuring Chase on vocals & acoustic guitar, you can buy this album for $7 at the above links, and while you can stream it for free there, consider buying it to support his work! Note however that "S.T.P.Y.I.T.F.T." has been heavily condensed from it's originally planned length of 23 songs, with his 25+ minute "Stray Dog Howl" among the dropped tracks.

Featuring 10 songs for about 38 minutes in length, many of which having previously heard on prior demos, let's begin this review with it's opening number "Feelings Over Minor Chords"! Featuring a very cheerful guitar melody, the lyrics take on a blatantly sarcastic vibe, presumably making light of indie and folk rock musicians with overly upbeat and happy songs. This track is amusing in this regard, and it slowly gets a little more aggressive and intense as it goes along, but the song's title is sung a little too often for my liking. Still a nice showcase for Chase's humorous side with strong guitar work! Second is the first outside cover on the album, his rendition of local doom metal trio AlgomA's song "Reclaimed By The Forest", which we have heard Chase tackle previously in his techno project The Black Lodge Masters. This version is a dark acoustic track that dramatically builds into the verses with a lot of intense guitar strumming, and it has a haunting minimalism to it.

This cover would presumably be a great fit with a full electric band, but it's a great showcase of Chase's darker musical side on it's own, and it's an early highlight! The song does end abruptly, but it segues right into the third song (if heard back-to-back), namely the album's longest, "St. Marie Revisited". The lyrics obviously have a local relevance, but they are honestly hard to make out for much of the song, which maintains the dark intensity of the prior cover. Instead, this one has but more projected vocals and varied emotion, complete with Awokest-style shrieking late and even more relentless guitar riffing. Shame this is just audio, imagine how this performance looks live! Very entertaining song for what it is, and it too runs right into the fourth song, "Rites of the Wendigo", a stripped down and condensed version of a song from Awokest's April studio album "Solving The Human Condition". The Awokest version, to me, was overly long and relentless without clear vocals, but does it work better here?

Structurally, it does, with the song having more focus and variance despite the vocals/guitar-only setup, and it allows Chase to flex his folk/punk muscles with another dose of extreme metal intensity in the back half! That said, as a metalhead, I would like to hear the Awokest version edited to match Chase's solo arrangement of the song, as I imagine that would work well, but as pure music, the solo redo is better. This runs into the fifth song, "Live To Work", which is the album's first track that I wasn't familiar with from prior demos. Ostensibly about the endless cycle of employment, this song is entertaining enough with a relatable tone from prior tracks, but the levels aren't as strong here, with Chase's vocals often buried in the guitar, and when he gets more intense and aggressive late, the song can crackle a little bit. The song's on-brand for the album and Chase's solo work, but the mix could have used another pass. As best as I can tell, the string of songs directly running into each other ends here, for what it's worth.

Track #6 is another cover, this time of "Beyond The Sun" by British crust punk band Amebix. Featuring some of the clearest and most passionate singing yet on the album, Chase adapts this song well to an unplugged setting, and while we don't really get any metal screaming here, he makes up for it with intensity and purpose. I wasn't familiar with Amebix before Chase covered this song in a Facebook video earlier this year, but it's a strong adaptation that matches the original's shifts in tone and emotion, and it's another fine choice for this album! That's followed by "Wear & Tear", which I wasn't familiar with either, but it delivers more of the same solo action you're used to from earlier originals. He shifts from his distinctive clean vocals to primal screams with surprising ease, and it's nicely showcased here, with his fast-paced, relentless guitar riffing also put to good use. Nothing overly shocking (comparatively), but fans will be right at home!

Eighth up is another new one (to me, at least), entitled "Millions & Billions Of Dollars". More of a guitar exhibition than some earlier songs, the vocals seem to be building towards a huge climax, complete with evil-sounding spoken word,  but it never comes, instead ending on a (vocally) softer folk punk note for it's final minute or so. Chase's picking and riffing comes through well, but structurally and vocally, there is better on the album, at least for what I'm looking for. Solid track as it goes! The penultimate (and shortest) track on "Songs To Punch Yourself In The Face To" is it's last cover, that being of Creedence Clearwater Revival's "Proud Mary". Don't go into this expecting a faithful rendition though, as Chase sings the whole song in a black metal-esque shriek, contrasting with the acoustic guitar work (anyone else getting Impaled Northern Moonforest vibes here?) It's an amusing take with good guitar, but be warned what's on offer before you check it out.

The album closes with "Running Out Of Beer", which takes about as much of a 180° turn as you can get without changing any of the personnel, as this is basically a classic country ballad, complete with added piano work for extra variance. You get a little bit of Chase's prior anger and intensity in the back half, but it mostly stays in it's genre lane. It's a well done change of pace with a strong lyrical narrative, but the keyboarding doesn't help the song, and it often crowds out the guitar and vocals as it goes. Solidly done closer, especially for outlaw country fans, but the piano isn't to my liking here.

So, what are my final thoughts on (The Ghost Of) Chase's first official album? Overall, if you like his brand of intense, in-your-face, metal-tinged folk/punk, this will do the job quite nicely! Despite recording this as a solo singer/guitarist (piano on the closer excepted), he doesn't approach these songs as a coffee-shop indie act, and delivers some angry and irreverent material that showcases his strong musical abilities without compromising an inch. This doesn't feel like a studio release, and it has the immediacy of his live shows, which is a good thing, even down to the unpolished production. The high amount of covers is surprising, especially given how cut down "Songs To Punch Yourself..." was from original hype, and a lot of these songs would probably lend themselves better to a full band electric presentation, but on tracks like "Solving the Human Condition" and "Wear & Tear", he proves that a full band isn't 100% necessary.

As an extreme metal fan, I tend to prefer his Awokest material, but Chase delivers the goods in this stripped down setting without hesitation, and if you love his live shows, you would be well advised to check this album out at the above links! I hope you guys liked our last album review of the 2010s, and as for January... St. Ignace, Michigan metal band Heavy Lies The Crown in the drivers seat for their debut album "Scatter Brain", but could another new album swoop in to get 2020's first review? Find out next month, and stay tuned for New Year's Eve concert previews next! Thanks everyone!
Posted by The Sault Metal Scene at 9:47 PM