In our 48th monthly CD review at The Sault Metal Scene, we're taking a look at Sault Ontario grunge/alternative rock band Haggith's third studio album "Deuce" today! The band's second full studio release recorded in the "mainline" method of their debut CD "Dragon Joy Ride", this album was recorded between September 2012 and April 2013 at Paperclip Productions, finally seeing it's initial physical release on May 10th. The album features contributions from the band's current lineup, and all of the below information on that front comes from credits on their YouTube channel's uploads of the album's material. Lead vocals are handled by Curtis McKenzie on all but 3 tracks (which are done by Mike Haggith, who also handles all drum and keyboard/synthesizer parts), while the guitar is largely played by Daniel Horton (though Curtisplays on two songs and Mike on one.) Bass parts are split fairly evenly between Daniel, Mike, and Caleb Cachagee (with Curtis on one track), while recent live performer Kristi-Lee Marshall provides backing vocals on the album's final song.

"Deuce" can be purchased digitally and physically for $5 at their Bandcamp page and locally at The Rad Zone, Case's Music, and at future concerts, so pick it up A.S.A.P. to hear Haggith's newest material! You can stream the full album digitally at the above links too, and each song title below is linked to it's YouTube upload, but please buy it to support their work. Featuring 11 tracks at about 39 minutes in length, let's begin with a look at the combined first two!

As the first song is a 59 second intro to the second song, I'll review them together, so "Deuce" kicks off with "The Story Of..." which is a short introduction to the title character of "Leon The Janitor", a first person song about his thoughts and behaviours. The intro essentially features Curtis singing about Leon overtop of a bouncy and slow melody, which is effective at setting up the full song, but doesn't really stand up on it's own. I do like how Curtis sang here instead of Mike Haggith on the full song, as Mike is playing Leon The Janitor on it, an adaptation of one of his solo songs. An energetic alternative hard rock number, this has more of a looser and casual feel than many of the Haggith band's earlier songs, and Mike's singing voice has a deeper and more serious quality to it that fits the song's themes a bit easier than in live performances. The guitar work is solid, I like Daniel's solo, and Caleb puts in a solid effort on bass as well. I'd maybe like there to be a fuller sound in the verses, and maybe a bit of a heavier overall feeling, but "The Story of Leon the Janitor" is a fitting opener to this album!

Next on this album is "Time For A Change" (also the CD's longest track), which seems to be a response to people complaining about the songwriter's supposed wasted life. Opening with a slow march-esque drum beat and some softer singing from Curtis, it's effectively played but not that heavy, almost like this is an acoustic take of an otherwise hard-edged song, and though it does slowly build in intensity, it feels like there's less guitar input than there should be, and the solo even seems misplaced. However, the pacing's good and the emotion is clear in the vocals, and the lyrical defiance is good, but I just wish this song was more fleshed out and fuller sounding to match it's themes & length.

It's followed by "To Whom This May Concern", written as a letter to a loved one that can't be helped easily. The first song on "Deuce" with keyed instrumentation, the synthesizer input seems like a dated clash, but the song's mood and downbeat feeling does work well, and Curtis has the right tone for each part of the song to suit the intensities! Though not a heavy rocker, I like Daniel's solo and some of the later effect usage, and it has a dark 1980s jam feel that works to it's benefit, without sounding too empty, so it works well! Fifth on "Deuce" is the album's shortest full track "Loverbeam", which is an alternative hard rock jam about love and being attracted by someone's "loverbeam", as written by Curtis McKenzie's brother Travis. Almost a punk song in tone and melody, the lyrics are fairly repetitive despite the song's length, and it's not really the type of song to showcase any members specifically, but it works for what it is! It has a solid sound and attitude, while keeping with the personal nature of the early lyrics, but I'd be curious to hear how it'd sound if it was longer.

Then we have "Safe On The Outside", which seems to be about following your own path in life, no matter what goes wrong. Mike's synthesizer intro fits better here than it did previously, and though this is another softer track, the choruses have a good build-up of aggression, and Curtis' vocal range is on full display! However, like on some earlier songs, the verses feel empty, and the singing feels too aggressive at times for the song's overall sound. It has a catchiness though, and the lyrics are among the better ones I've heard on "Deuce" so far, but I'd like the song to either be a bit shorter or fuller in sound to match the members' respective skills. Seventh is an untitled song that was partially written by Jesse Malchow, with lyrics about self-reflection and what one has done with their life. Essentially a Mike Haggith solo track (with no bass or drum accompaniment), he gives some good emotion and effort on this song, and it's not overly long, but fans of Haggith's heavier material won't take to this one as much. If you like Mike's solo work and unplugged/more intimate originals though, give this untitled track a listen!

Song number 8 is "As Time Comes To Pass", which again looks at self-reflection, this time the ramifications of past choices. Opening with another softer guitar-led intro with clean emotional singing from Curtis, this song isn't really heavy at all, but it does build well into a fuller track, and Daniel Horton gets some nice solo time midway through! The drumming and pace is solid, and it's one of the better light tracks on "Deuce", especially as it doesn't have an empty feeling, but fans hoping for something heavy will want to keep looking. The next track is "To Stay Alive", a reminiscence of a love that seemed to end badly. Like some other past songs on "Deuce", this is a very introspective and emotional track that features softer verses and a harder chorus, and Curtis is impressive vocally again, but like on it's similar companions, the verses do seem empty. I like Mike's drumming a lot though, and the guitar solo is upbeat without taking anything away from the song, and it's one of the better songs of it's ilk on this album! However, at this point, I'd like to see some variance from the reflective emotional songs that make up much of it.

The CD's penultimate song is "Clifton Hill", which explores themes of loneliness and departure. Though a bit similar to many of the other songs on "Deuce", it is overall heavier and less intricate, and I like the backing vocal usage on the chorus especially! This has more of the loose alternative rock feel that I really like of theirs, if not overly brutal, and the guitar riffs and solo help out well! This is a fun and melodic track, but I wish the verses were a bit more upbeat, and I have a feeling this song plays better in concert where it has a more freewheeling and casual vibe. The album closes with "75", which takes an angry stance against someone in life who isn't helping matters. The third and last song with Mike on lead vocals, he suits the song and it's mood well, while the backing vocals are well utilized, though Kristi-Lee Marshall could be a bit louder in the mix (a problem that came up live as well.) The band's chemistry is really good here, and the instrumentation is consistent (with Daniel shining on guitar), but I think it could work even better if it was a touch heavier.

After the song ends, there's a 2 minute bonus track of sorts featuring lyrics on the back of the booklet and somewhat of a loose acoustic jam feel that serves as a neat addition, though it doesn't really stand on it's own. So, what are my final thoughts on "Deuce"? Well, on the positive side of things, I find that this album is better produced and packaged than Haggith's previous albums, with a much more professional sound and a better instrument mix, and the members have a lot more chemistry than before! Curtis McKenzie & Mike Haggith impressed with their melodic vocals, Daniel Horton's guitar work was steady and entertaining, the bass was overall very solid, and Mike's drumming was top notch and very fitting of the material, which tended to be well performed overall! However, I have to admit that I liked "Dragon Joy Ride" better when comparing their two mainline albums.  On a personal preference level, it's heavier and grungier with more catchy songs, whereas I found "Deuce" to be populated with a lot of personal emotions, soft melodies, and minimal heaviness outside of choruses and solos. 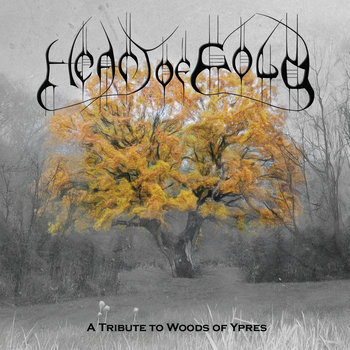 Nothing was bad, but I'd have wanted to have seen some more variance than what made the final cut, though the album is definitely heavier than "Apocalypse". I'd also like to hear more bass input from Caleb Cachagee, who actually factored in on some of the best songs on "Deuce" (like "Leon the Janitor" and "75"), and hopefully he'll get a chance on their next albums. Overall, "Deuce" is a clear improvement as a recording project and album release, and it's a very entertaining CD, but I want to see Haggith combine the raw grunge intensity of "Dragon Joy Ride" with the recording methods used on "Deuce" to capture everything at it's apex. Definitely pick up "Deuce" at the above links though! For our next CD review at the SMS, I've decided to take a look at the new Woods of Ypres tribute album "Heart of Gold", thus pushing our Crimson Crusade EP review to August, but I know many Woods fans are curious to hear this one, so hopefully this will work out! Remember, even though no local bands are on the album, all of the songs were at least partially composed by the late David Gold, and it's in tribute to his memory, so it definitely fits for an SMS review! Look out for it in early July, and stay tuned for more news shortly! Thanks everyone!
Posted by The Sault Metal Scene at 12:00 AM