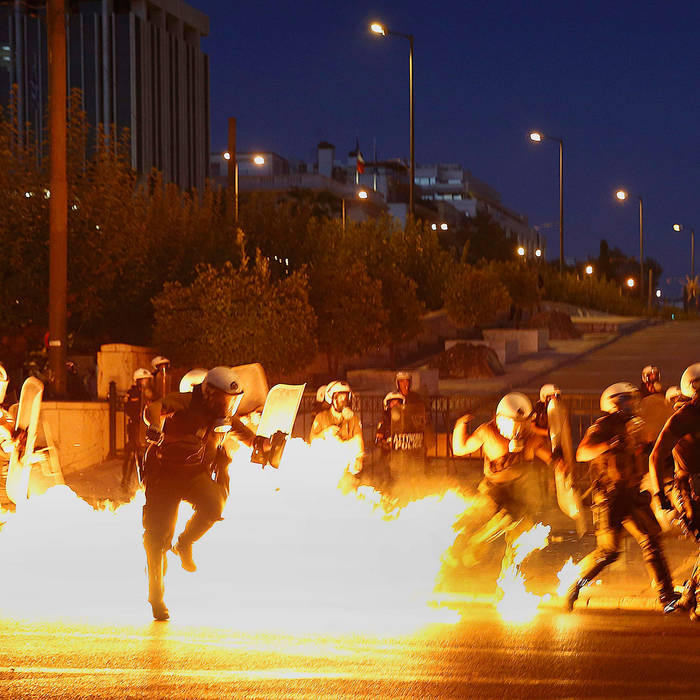 It's now time for our 109th monthly CD review at The Sault Metal Scene, as we're taking a look at former Skull After Betrayl frontman and Bear Hunters guitarist Mike Vincent's debut solo album "Ultimate Chaos"! Released on March 25th (concurrently with his sophomore album "Apocalypse") via his Bandcamp page, this independently released and recorded album was recorded between 2016 and 2017, and it unites what were originally planned to be two solo EPs named "Six, Six, Six" & "We're Of Nothing", though those titles do survive as song names. True to it's solo nature, Mike performs every credited instrument on the album, save for a guest appearance on "Times of the Unforgotten" by his uncle. That said, this album is completely instrumental, despite Mike's past work as a singer with Skull After Betrayl and Devastation of the Heavens. "Ultimate Chaos" is available solely on a "name your price" model at the above links, with no stated CD pressings.

You can also stream this album on Bandcamp, and song names linked below are via these copies, but consider paying for Mike's album to support his work! Note that we won't be sharing individual pictures from each song's respective Bandcamp link due to the politically charged imagery used. While they may reflect the songs' themes, I don't want to divide or provoke readers, and they're not of Mike himself anyway. With 13 songs running for about an hour in length, let's begin this review!

The album begins with six songs whose names all begin with the letter S, as they were originally planned to comprise the suitably alliterative "Six, Six, Six" EP. "Shoah" is up first, which happens to be a cover of Mike's old band Skull After Betrayl's self-titled song, obviously renamed following that band's demise. This song has flourishes of groove and death metal, and some catchy chugging riffs, though the drumming is monotonous on the slower parts, it starts and ends very abruptly, and the vocals of the original song are definitely missed. Not bad on it's own merits though! Next is "Sacred Sins", which has more of a thrash metal base, and his guitar work has a steady yet fast rhythm while never sticking to a specific formula for too long. There is a hardcore-style breakdown late, which is a bit of a surprise addition, but not unwelcomed! Better production would benefit this song, but Mike's guitar skills are given a better showcase on this faster and heavier original track!

Third is the album's shortest song, "Soulless Sanctuary", which gives me a bit of a Sepultura or Soulfly vibe in it's structure and riffing, especially in the first half, if that's fair. This song harbours the first real guitar solo of the album, and while it's not overly long or complex, it does give Mike a chance to let loose! Well structured and paced, this shows Mike's range a little more, and it an early highlight! That's followed by "Screaming Serenity", which has more of a progressive, technical flair to it, while maintaining a fast and aggressive pace. As a pure musician, this is Mike's strongest performance on guitar yet, but the abrupt breaks after where the chorus would likely go are a mood-killer. The bridge does have a doomier, slower rhythm before Mike turns on the jets to end things, but to me, it's just an aural barrage that doesn't add anything new to the song. Early on though, it's top notch!

Next here is "Systematical Satan", which has a slow and ominous opening (which reprises near the end) that calls Slayer to mind, before picking up into suitably thrashy territory, with some groove-inspired sections to help break things up. The cymbals in the percussion often have sound too much like a dinging bell, and the song strikes me as a little too long (especially without vocals), but the body of the song moves at a ripping pace at it's peak, and will definitely please established fans of Mike's original music! Song #6 is "Six, Six, Six" (naturally), which was the originally planned EP's title track. Another ominous opening leads into a track that bounces between speedy thrash and more progressive riffing that honestly comes across as a little meandering to me. The mood changes are otherwise fine, and the guitar solo is definitely stronger than on "Soulless Sanctuary"!

I'd have ended the song with a fade-out, but "Six, Six, Six" is a fine showcase of Mike's talents to end the album's first half with! The remaining seven songs were to have comprised his planned EP "We're Of Nothing", and do not share the same first letter. First from this side is "Times of the Unfogotten", which features a guest appearance by Mike's uncle Jason Ladouceur (ex-Winkstinger) on guitar. It's hard to pin down Jason's exact involvement, but the guitar work is solid and it sounds fuller and better layered here! Mike's drum tracks sound more natural on this song, which has a groove metal vibe while echoing a bit of System of a Down on the faster stretches. A guitar solo would have been a welcome addition, but this is a good sign of things to come for the second half of "Ultimate Chaos"!

Up next is "Chapters of No Light", which is a slow, dark, and minimalistic song for it's first 3 minutes that particularly serves as a showcase of Mike's bass abilities. No drums, not much guitar, and not much to really say until the full instrumentation kicks in for the final 100 seconds, with the song getting more technical there, but the drums sound out of place at a key moment. As a pure song, this is not my favourite on this album, but Mike does let loose at the end! Then we have "We're Of Nothing", the intended title track of the EP in question. This is a return to Mike's prior form, with melodic yet heavy riffing, rapid fire drumming, and some heavy breakdowns for good measure, though his guitar solo isn't layered well at all, and I really had to crank my speakers to hear it with any clarity. Otherwise, this is a quality song on Mike's solo debut!

"Phases of Pain" follows next, whose sinister opening leads into a fast and heavy song that calls to mind some NWOAHM bands, with the guitar work in particular having a catchy melody at it's height! The drum tracks benefit the song, and the bass is solid too, but I'd have cut down on the false endings, but this is one of my favourite songs on this album for a reason! Then we have "Filters of Fire", which is a slower but still heavy and darker-edged song with nicely suited bass work and pounding guitar riffs that is another album hightlight, effectively showcasing Mike's talents without feeling a need to go too fast. Mike arguably has his strongest guitar solo yet, but again, it's not layered well, coming across as too quiet. Other than that, things are going well again on this track!

The penultimate song is "Chapter 2: Glow Of The Dark" (I presume "Chapter 1" was "Chapters of No Light"), and this track is definitely heavier out of the gate than it's predecessor! More of a hardcore-based track, the pounding riffs mesh nicely with the steady drum tracks, and the aggressive steady pace is only a boon at this stage of the album. It could stand to be a little more melodic, but it's a more brutal and full "chapter" than we saw before! The album closes with it's title track and longest song, "Ultimate Chaos", which has another dark softer opening before the song proper kicks into fully metal gear. Though a strong performance technically, the song's structure isn't as cleanly put out as we had previously seen, and even the guitar solo suffers a bit in that regard, despite being louder in the mix. It's an entertaining song on it's own merits, the the softer closing stretch sends the album out easy, but earlier songs showcase Mike's songwriting abilities better to me.

So, what are my final thoughts on Mike Vincent's debut solo album? Overall, I think "Ultimate Chaos" is an entertaining debut album that effectively showcases Mike's musical growth! Having followed his music career since the pre-SMS days when we were both attending Bawating C&VS,  I can attest to his improvement in skill and technicality in the past decade+, and he is a talented songwriter and multi-instrumentalist when fully focused, as songs like "Screaming Serenity" and "Filters of Fire" attest! Since Skull After Betrayl's last shows in 2011, we haven't really seen Mike as a live concert presence, but if he shored up these songs with vocals, most would be quickly ready for the stage! There is room for improvement though. Production quality could be better, especially in how guitar solos (when featured) are layered in the mix, drum tracks could sometimes be monotonous, and the structures of a few songs could stand to be tightened up.

Some songs are also begging for the inclusion of vocals, especially given the political themes implied on Bandcamp, but for a debut solo effort, Mike's firmly on his way, and hopefully "Apocalypse"  builds on this base with even more quality original metal! Buy "Ultimate Chaos" at the above links! So, what is our next album review of choice for this month on the SMS? It will be a new album, but I'm unsure which at this juncture. As it currently stands, I'm torn between three albums (Mike McCleary's "Weight of the World", Sykotyk Rampage's "Live at the Paris Hilton", and SweetKenny's "Management"), with Redundant's debut EP a wild card contender, pending local on-sale availability, not to mention potential releases that haven't even been firmly announced yet. Will we review one of these four albums this month, or something else entirely? Stay tuned to find out, and for more news and notes on the site shortly! Thanks everyone!
Posted by The Sault Metal Scene at 1:28 PM