Saultites In Out Of Town Bands Profile: Feral Noise & Sadomasochism 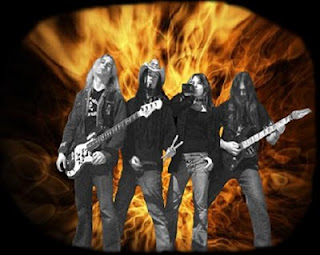 Local Info: The only Saultite in Feral Noise was Tym Morrison, who local music fans will be sure to recognize! A lifelong musician, Tym has played in numerous local bands including Hollow, Carbon Black, and Heresy, among many others! Nowadays, you'll best know Tym from his frequent string of solo acoustic concerts in the Sault area (most recently a regular run at The Harp), though many fans will also remember his mid-2000s and 2009-2013 runs with his metal cover band Caveman Morrison. Tym released his "Solo Project" CD in 2006, has worked with numerous established musicians in the Sault area, and has also taught guitar in the past as well, so look out for Tym at a venue near you! 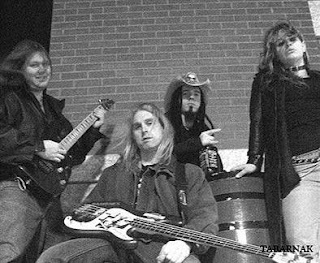 Band Bio: Tym Morrison moved to Calgary in 2006, to further his ultimate musical goals. Later in that year, Tym met JANE?DOE members Nathalie Boudreau and Jamie Bridger at a jam night. He later auditioned for and made their new band, which they called Feral Noise. Former Caveman Morrison drummer Greg Sutherland was an early drummer for Feral Noise, before being replaced by Landon Chatterton, also met at a jam night. Feral Noise were a frequent sight in the Calgary area through 2008, playing mostly hard rock/metal covers, everything from Megadeth to ABBA! They also played a couple original tracks, one of which has a posted demo on their official website! Tym Morrison has called Feral Noise "the most organized band he's ever played in"! The band eventually dissolved, though the band's respective members appear to still be active in music, with Tym returning to the Sault scene in 2009, though Nathalie is still musically active with a solo project & more in British Columbia.

To be fair, there isn't a lot of Feral Noise audio/video online, just one studio demo sans vocals, and one live video (check it out here), but what I hear is really good! Nathalie Boudreau is a talented vocalist, she reminds me of Melissa from Bad Side in ways, though more aggressive, and you can hear more likely-similar work from her later Vancouver bands at this location! The demo of "Bury The Hatchet" from their website gives a clearer indication of the instrumentation, and you can tell this is Tym Morrison playing, he delivers once again! Nice and heavy, and the solo is awesome! It's a shame I never got to see Feral Noise live, it'd have been a great show, it'd be nice to see more from them online though. Luckily, they have embeddable video online, so check this out, Feral Noise from a 2007 show in Calgary covering the Pantera classic "Cowboys From Hell", and Motley Crue's "Live Wire"!

Local Info: Sault Ste. Marie, Michigan's own Mikey Bishop was the final drummer in Sadomasochism, which is one of the many bands he's been a part of in recent years! Local fans may best recognize Mikey as the drummer for the local hard rock quartet Half A Man and the recently inactive Lansing black metal band Summon, along with former local acts Bludgeoned (also featuring John Rios of Sadomasochism), and mid-90s groove metal band Lower S.E.S., among many others! Currently working on new material with Half A Man, look for lots of exciting things from Mikey in the future, including hopefully more live concerts!

Band Bio: Mikey Bishop joined Sadomasochism in 2003, replacing Jason Kandea behind the drumkit. The band itself had been going strong since 1999 in the Grand Rapids area, initially playing mostly backyard parties amongst an area unfamiliar to death metal. The band persevered, eventually playing more shows and winning the WKLQ Heavyweight Championships Battle of the Bands in 2002! The band frequently toured Michigan and the midwest, opening for major bands like Superjoint Ritual, Satyricon, Dying Fetus, and Summon. They released their only album, "Worship The Dark" in December 2002, loaded with lots of brutal death metal music and B-horror movie inspired lyrics! Though their profile was on the rise, the departures of Mikey and guitarist Ingrid Joplin eventually led to Sadomasochism's 2004 breakup. Most ex-members of Sadomasochism later played for a newer Grand Rapids death metal band named Flesh For The Beast, (though Mikey was not a part), while frontman John Rios' current band From Hell are likely most similar to Sadomasochism's old sound.

As a fan of death metal, let me express how awesome these guys were! John Rios is a really good growler, clear and vicious simultaneously! The guitar work is really nice, Jason Salmer and Ingrid Joplin were really proficient on guitar, and the Kandea brothers were awesome too on bass and drums! I don't know if they ever played in Sault Michigan, but I bet it'd have been an awesome show! Mikey Bishop never drummed on any Sadomasochism albums, but he's an excellent drummer, and the live clips I've seen with him in the lineup have been quite good! I do find that the songs they have up are slightly muffled, there isn't a huge "punch" to the studio recordings, but the songs are still great! It's awesome to see them hit such heights in the early 2000s, and though it's sad they broke up, Flesh For The Beast carried on their sound nicely! Luckily, they have lots of stuff online to check out, there's plenty of songs on their MySpace page, and there are some surviving concert videos, including this one of Sadomasochism playing their album's title track!