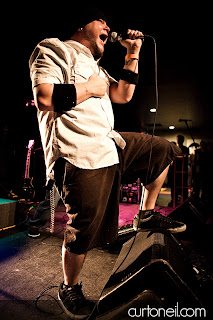 Background: From November 30th to December 2nd, 2009, a huge battle of the bands was held at The Canadian Nightclub, where 20 bands gathered over three nights to compete for the chance to open for Kiss at their headlining show at The Essar Center on December 15th, 2009, though it was later postponed to August 10th, 2010 due to inclement weather. This huge opportunity was held in cooperation with local radio station Rock 101 and Kiss' touring company AEG Live. Of the 20 bands who signed up, 10 each performed on the first two days, with performance order determined in a secret random drawing before the event. Each band received a 10 minute timeslot to perform two original songs, with no covers allowed. A judging panel chose 5 bands each night to advance to the finals on December 2nd, with 75% of the voting based on their performance, talent, and entertainment level, and 25% based on audience reaction. The finals on December 2nd were formatted and judged on similar criteria (though the band order was announced for the finals), after which one band would be chosen as the winners. 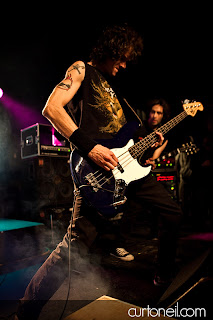 Prizes: The winners would initially have been recommended to Kiss' management as the local openers for their concert on December 15th, though it was later confirmed that Kiss would approve the winner of the battle no matter what. The winning band would also win 10 tickets to Kiss' concert at The Essar Center, along with a guaranteed photo with Kiss. Though no other prizes were offered for the runner-up bands, the second place band was guaranteed the opportunity to open for Kiss in the event that the first place act couldn't perform at the concert.

Results: The first night of the battle saw Blues Harvest, Flat Stanley, Garden of Bedlam, Nebraska Arms, and Stiffler's Mom advance to the December 2nd finals. The following evening, Gsis Murphy, Lion Ride, Nixxon Dixxon, Sense of Truth, and Wishbone moved on to the finals to complete the 10 band final round. After the final judges results were tallied, it was revealed that Garden of Bedlam beat Lion Ride by a single point to win the battle of the bands and the right to open for Kiss in Sault Ontario. Placements for the other 8 finalist bands and the 10 bands who didn't advance were not publically revealed.

Aftermath (Finalists): Garden of Bedlam successfully opened for Kiss with a half hour set at the new date of August 10th, 2010, helping solidify their place in the local metal scene. Since the battle, Garden of Bedlam have headlined numerous major concerts (including the Rotaryfest Second Stage in 2010 & 2012), played scattered out of town dates, and released their first full length CD "Everything Will Die" in 2011. Lion Ride continued their local success through 2011 with numerous Ontario concert dates, and recorded material towards an unreleased album in 2010, but they would ultimately disband in February 2012. Stiffler's Mom continue to play numerous concerts in the area to this day (save for a 2011-2012 breakup), while Flat Stanley are currently working on new studio material with guest singers. Blues Harvest & Wishbone stayed prominent with various local concert dates and recording sessions towards new albums, though Wishbone broke up between briefly in 2012, and Blues Harvest have been inactive since 2013. Sense of Truth played scattered live dates through May 2010 and recorded material towards their unreleased debut EP, before falling inactive and eventually parting ways in 2011. Nixxon Dixxon played numerous high profile dates in 2010 in the Upper Peninsula, including opening for Pop Evil & Vince Neil at Kewadin Casino concerts, before disbanding that August. Gsis Murphy & Nebraska Arms continued to play occasional local concerts through mid-2010, when they both quietly parted ways. 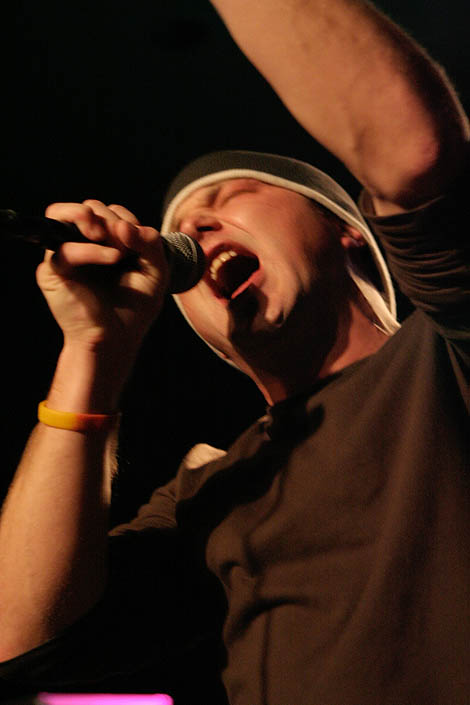 Aftermath (Non-Finalists): The Billy Bastards continue to play scattered local concerts to devoted crowds, releasing three well received albums in the process, while Sykotyk Rampage, though only occasionally seen on stage with frequency, have recorded dozens of new and unique albums since this battle. Caveman Morrison played live often until falling inactive in 2014, while Stillbroke played two more shows in early 2010 before entering a long period of inactivity, returning in late 2011 with a new lineup & name (Borderline Divine) before disbanding for good in mid-2012 after just three concerts. Dirty Virgin have only been seen since at one off Canadian Nightclub gigs in the spring of 2011 & 2012, and Huckster continued playing off & on through the summer of 2011, seemingly going inactive later that year. Bring The Fallen rocked local concert venues often until their dissolution in the spring of 2011 (save for a one-off reunion in July 2013), and both Middle of Nowhere and Tiny Trebuchet continued to play occasional local dates through their descent into inactivity in mid-2010.


Videos:
Nixxon Dixxon's semifinal set
Stillbroke's first round set
(Due to the deletion of a previously featured Nixxon Dixxon video, a Garden of Bedlam video from a separate concert is also featured below)