The End Of Hammerspace, New Videos, And Lots More!!

Here's another news post to kick off this Thursday with, and it has a lot of assorted stuff from the last while that we're finally getting on the site for you guys to check out! Today, we have a band breakup to mention, along with this week's classic video, a handful of assorted shorter stories from the last little while, and a new video discovery of a metal performance from a few years back, so here's what you need to know!

It looks like Sault Michigan metal quintet Hammerspace have disbanded again. An official statement hasn't been made to that effect, but posts are made by band members in a thread on the band's Facebook page last month that say things like "the band is broken, time to start anew" and "I had fun while it lasted." That comment thread got very personal & detailed, and I don't wanna bring anything bad to light, but a partial reason for Hammerspace's demise appears to be band members moving out of town, with only John Bergeron & Tim Podoba not mentioned as leaving by the spring. This appears to end Hammerspace's second local run, which didn't amount to much beyond some song postings, though fans are sure to remember their 2010-early 2011 run best of all, which featured a number of notable local concert dates. I enjoyed Hammerspace and thought they'd make it further than they did locally, but hopefully the guys stay active in music in the coming years, as there's a lot of talent there! Best of luck to John, Justin, Denny, Paul, Tim, and the other former members in the future, and if anything new comes out on Hammerspace or their members, I'll try to have it here! 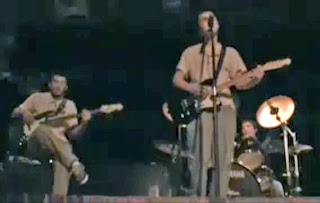 Next up, here's an interesting find of a local band playing something heavier from a few years back! While doing research for an upcoming feature post, I came across a video of a Sault Michigan band named The Right Reverends playing two songs at a 2007 Battle of the Bands at Sault Area High School! The band featured singer/guitarists Robert Quinn & Tim Hall and drummer Mitchell Leon, who I believe was in the short lived death metal band Hands of Betrayal the following year. In this video, which YouTube user fishstix7711 posted online in February 2008, The Right Reverends covered Bob Dylan's "The Man In Me" before playing what sounds like an original song named "Puppies" that definitely leans in a metal direction! It doesn't start until 4:52 into the video, and it's not too long, but it has a good sense of humour about it, even if it's nothing too technically amazing! I'm not sure whatever happened to The Right Reverends, but this is an interesting video from 5 years ago, so give it a look below if you wanna!

Thirdly for today, here's three more assorted shorter stories from the last little while, and as usual, these are in alphabetical order by band, musician, or post name:

And finally, here's this week's classic video! With them playing two different concerts this weekend, it made perfect sense to focus this week's classic video around local hardcore quintet As It Stands, and with it almost being a year since this video's filming, it's as good a time as any to put this on YouTube! This comes from one of As It Stands' out of town concerts last year, when they headlined a hardcore concert at The Coach & Horses in Windsor on March 26th, 2011. Attendee Jo-Ann Chayka filmed this video of the band playing their song "Conception" that night, and posted it onto Facebook the next day. It's a solid performance with good audio quality (Justin Pregent's very quiet clean singing aside), but the lighting is very dark and red, almost like it's in Virtual Boy-vision. It's a nice video though, and it's nice to see local bands making waves in Southern Ontario like this! This video was originally posted onto Facebook at http://facebook.com/photo.php?v=10150174364083274 and NO COPYRIGHT INFRINGEMENT IS INTENDED!!! All credit for this video goes to As It Stands and Jo-Ann, I'm just trying to share this performance with a wider audience like it deserves! It's a solid video of As It Stands, so give it a look below, and go see them at The Rosie & Speak Easy this weekend!

That's all for now, but stay tuned for more news, hopefully some concert reviews, and my "Woods V" review shortly! Thanks everyone!
Posted by The Sault Metal Scene at 1:01 AM