Now, let's get to some previews of this weekend's metal & hard rock concerts for this weekend, along with some assorted other stories, and in a light overall weekend, there's still some notable shows on the horizon! One was cancelled though, that being Caveman Morrison frontman Tym Morrison's projected solo concert at The Rockstar Bar tonight, which would have kicked off a new weekly concert arrangement. According to his Facebook group, the new arrangement was postponed due to attendance concerns, specifically thanks to the CARHA Hockey World Cup going on this week, which I'll have more on in a second. Disappointing, but Tym's still on for The Rockstar Bar at a future start date, so I'll keep you posted when more on that is announced! Also, he hasn't announced a show for Bossy's Pub N' Grub on Saturday as of this writing, but if he does, I'll make sure you guys know about it! For now though, we have previews of this weekend's known metal/hard rock concerts next, starting with a CARHA-related LOCAL CONCERT ALERT!! 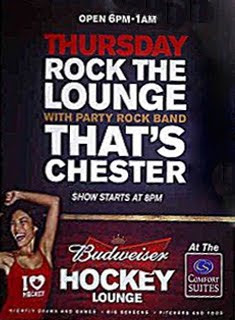 I apologize for the lateness of this, but I only just heard about it on Tuesday, and it was too late to post without redundantly covering the same details in consecutive days. With the 2012 CARHA Hockey World Cup (for adult recreational league hockey teams) all over Sault Ontario this week, they're pulling out all the stops for entertainment and events around town, and among that entertainment is a concert set by local classic hard rock quintet That's Chester TONIGHT! They'll be rocking the Quattro Chophouse & Bar (temporarily renamed the Budweiser Hockey Lounge) inside the Comfort Suites & Conference Center (formerly The Ramada Inn) on Great Northern Road TONIGHT with a set of their hard rocking covers! Notably, they're the only non-DJ among the week's entertainment there during the CARHA World Cup, so if you want some rock with your hockey, today's the day to be there! There will also be draws, games, and drink specials for attendees from 6:00 PM onward, though That's Chester don't take the stage until 8:00 PM tonight. There's no announced cover, though bring cash just in case, and you must be 19 to attend. For more details, visit the above links or the official Facebook event page!

This is a bit different from most That's Chester shows, given the CARHA/Budweiser ties, but it sounds like a great party atmosphere at the "Budweiser Hockey Lounge" tonight for them to play in! I'm not familiar with Quattro or Comfort Suites as concert venues (though I remember attending a battle of the bands at the former Ramada Inn in 2007), but who knows, Quattro could become a future stomping ground for That's Chester if tonight's show goes well! So if you love hockey and want somewhere to party after the games tonight, or you just enjoy That's Chester, head down to this concert tonight! For a preview, here's That's Chester covering Jet's "Are You Gonna Be My Girl" a few years back!

(UPDATE, 2:23 PM) The other metal concert of the weekend was to have been the return of Garden of Bedlam to The Rockstar Bar on Saturday night for their first gig of the new year, but the concert has sadly been postponed. According to a statement released on the band's Facebook page this afternoon, frontman Erik "Buzz" Boissineau sustained some back/spinal trauma in an accident yesterday morning, and was later found to have pneumonia as well, so the band will be postponing this Saturday's show to a later date so he can get better. Nothing was said about a possible new date for the concert yet, but as soon as something is announced, I'll let you guys know for sure! This is disappointing news, but hopefully Buzz gets better real soon, as we miss Garden of Bedlam on the local stage! As of right now, their next concert will be at April 7th's Ypres Metal Fest at The Canadian Nightclub, so circle your calendars for that, and I'll keep you guys posted when more band news rolls in!

And finally for today, here's three assorted shorter stories from the last little while, and as always, these are in alphabetical order by band, musician, or promoter name:
That's all for today, but stay tuned for our second of at least seven installments in our Battle of the Bands Rewind Mini-Series TOMORROW, where we're looking at the 2008 Case's Music Battle, along with our next Defunct Local Band Profile on Saturday, more news (of course), and if all goes according to plan, reviews of Garden of Bedlam's next show and "Woods V"? Fingers crossed, but stay tuned no matter what!
Posted by The Sault Metal Scene at 1:50 PM