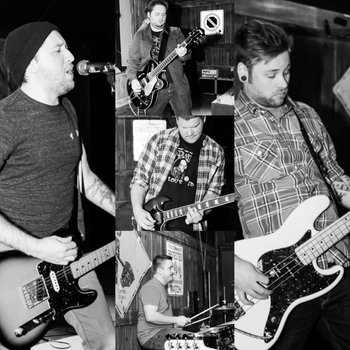 With their next show at Coch's Corner taking place tomorrow night, now's a good time for our 65th monthly CD review at The Sault Metal Scene, as we're taking a look at local indie/punk quintet Northwest's self-titled debut digital EP! Released on September 2nd through their Bandcamp page, this EP was recorded at Mission Control Studios with producer Dustin Jones earlier this year and later mixed & mastered by Fairmounts guitarist Simon Head. The EP features Northwest's original lineup, with singer/guitarist Wayne Watkins joined by guitarists/Terminal alumni Mike Yakasovich & Greg Callaghan, along with Wayne's ex-Small Town Rivals bandmates Mike Smykacz on bass and Clint Wilson on drums (though Clint has since left the band), with all but Mike Smykacz providing backing vocals. Currently available online only, you can download "Northwest" for just $2 (or more if you so chose) on Bandcamp, though it's unclear at best if there are plans to release physical copies of the EP. With just four songs clocking in at under 15 minutes in length, each track's name below is linked to it's Bandcamp copy.

This EP begins with "Young & Wild" (also named "Young, Wild, and Hopeless" on some live setlists), which slowly begins with bass riffing before the full band kicks in for this somewhat short number that has an upbeat but medium-tempo song. In contrast from their live show, Wayne's vocals oddly channel Perry Farrell a bit on the verses here, but they fit the melody of the song, which isn't overly fast or too ambitious. The triple guitar attack doesn't come across as overkill, Clint's drumming fits nicely, and it's a catchy enough number, but it'd be nice to see a more of a bite to the choruses, and the song does at times seem too laid back compared to it's title and lyrics. Second is the only 4 minute song on "Northwest", that being "Time", which is a bit more up-tempo and edgy in it's sound while still retaining an indie rock lightness, and I like the guitar melody and Wayne's rougher vocals here! I like the use of backing vocals, but at times, the background audio surprisingly sounds empty, which shouldn't be when they have three guitarists. Abrupt ending too, but it's a consistent track that will please Northwest fans!

Third on the EP is "Stars Don't Fall", which opens with a drum beat by Clint that sounds like a sped up take on Green Day's "Know Your Enemy" before the rest of the band jumps in for arguably the softest verses on the EP, with Northwest playing them in a very relaxed, quiet manner before amping up some more aggressive choruses powered by raspy higher vocals. Some of the bridge guitar work is really solid and among my favourite parts of the EP, and I like how the verses and choruses contrast, but this strikes me as a song that would play better in live concerts with more spontaneity and freedom. Northwest's EP closes with it's shortest song, "I Got You", which has an early Foo Fighters feel in it's instrumentation, and to me, it's my favourite of the four songs on the EP. It's the most consistent in tone, it has the catchiest chorus, and it has the most "rocking" riffs and melodies, if that makes sense. It captures the punk side of their sound nicely, but as catchy as the chorus is, it's also too repetitive with mostly repeated singing of the song's title. Solid ending though to a very good debut release!

So, what are my final thoughts on Northwest's EP? To me, it's a solid first effort at a recorded album from this experienced quintet, and given their past resumes in indie and punk bands, it's a nice marriage of their influences and styles! Wayne Watkins' vocals fit the songs well and are reminiscent of his old Nebraska Arms songs at times (even though he wasn't their singer), while he, Greg Callaghan, and Mike Yakasovich trade off and compliment each other on guitar without being lost in the shuffle. Clint Wilson's drumming and Mike Smykacz' bass work were both solid throughout, and the guys have chemistry, but there are some areas to address for their next recordings. The songs often lacked bite in the instrumentation and guitar riffing, with some songs sounding a bit empty & too reserved given the lyrics, and some of the chorus vocals could be repetitive. I've also found that these songs benefit from the live concert experience, and the EP is fairly short (where are songs like "Hangover Habits"?), but for a first album, Northwest have delivered the goods, and I'm curious to see what's next! Buy their EP above!

I hope you guys liked this month's CD review, and as for our last monthly review of 2014, we will definitely be looking at The Bear Hunters' debut album "Eternal Hibernation", which will officially be released at TOMORROW'S CD release show at The Canadian Nightclub, and we'll absolutely see you guys there for all of the action! That's all for today, but stay tuned tomorrow for a new news post before the show! Thanks everyone!
Posted by The Sault Metal Scene at 6:27 PM