It's time for another local metal CD review, and for the first time, I'm going to review an album from a band from Sault Michigan, and it's none other than defunct local blues/hard rockers Bad Side! When I was exploring downtown Sault Michigan yesterday during a break from classes, I went into Grooves Music (nice store, by the way), and they happened to have some local music CDs, and luckily, they had all three Bad Side albums! So I bought their debut self-titled release, and now I have it to review for you guys! Released in 2005, it features core members Melissa Krahnke on vocals and Jason Mapes on guitar (both share percussion and keyboard duties as well), with session musicians Rich Blair on bass & Dan Furmanik on rhythm guitar & bass. Melissa, Jason, and Dan produced the disc, and it was later mixed and mastered at Hitmakers Digital Studio in Henderson, Tennessee. The album, which is now out of print, costs just $10 and you can find it online at CDBaby and iTunes, while physical copies may be floating around at Grooves Music or other local merchants.

There are 15 songs on this album (that includes two bonus tracks), so this'll be a long review, but I'll try and keep things to the point as much as possible. Remember, I'm not a professional reviewer, if something seems poorly worded, thought out, or researched, my apologies! These are just my thoughts and impressions! (Updated on November 6th, 2012) 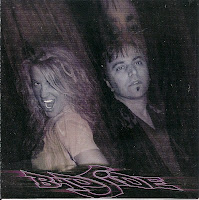 The album starts with an instrumental intro entitled "Prelude To A Kill". It features some violin playing from Dan Furmanik with backing piano, and it sets a good tone for the album. Short and to the point, can't ask for much more out of the intro! The first real song is "Soulkiller", and it sarts of in a rocking way! Nice catchy classic riffing, which keeps up throughout the song. Melissa's vocals might not be what you'd expect, they're deeper and more soulful than you might expect but they totally fit the songs. Interestingly, the chorus is softer than the verses, which kinda kills the mood a bit. No guitar solos either, sadly, but the song is still a good listen, and will get your toes tapping! Also, nice use of the talkbox effect!

This is followed by "Revenge", which also has a great classic hard rock feel to it! It flows better than "Soulkiller" did, but there's no real "punch" to it, so to speak, it just flows along. The piano also seems a touch out of place, and the song's shorter than I'd have expected, but it's not a bad song by any means, just a bit lacking. But on the next song, "I Will Come To You", I was completely suprised! It's starts with a piano driven ballad-like opening, though it picks up slowly as the song goes on. Great vocal work from Melissa, shifting from soft clean singing to a heavier soulful style at will! Finally get a bit of a real guitar solo on this song, not bad work by Jason, and it suits the song by how it's played. Perfect example of a song to break out your lighter for at a concert!

Next is "Mission", which immediately sounds old school by the keyboards being used at the beginning! Has a bouncier feel, but it has the same kind of straight flow that "Revenge" had. Great singing, it's a good song, but compared to their later work, it's not as varied and dynamic. "Money Money" picks things back up, the energy level and musicmanship is great. Similar pace, but things are definitely a bit more up-tempo and groovable! It also has the best guitar solo on the album so far too, but it's a bit drowned out by the other instruments. I love this song, it's catchy and makes you get on your feet!

"Feel Me" is the next song, and sounds very familiar, but I can't place it. The piano work in this song really fits, and Jason shreds it up on guitar, especially on the solo! Things are slowly picking up for the album as a whole! After this is the song "You're So Hot", a song I really liked before picking up the album already! The band's firing on all cylinders with this song, the guitar work is excellent from start to finish, Melissa's singing is at top form, and you can't help but get into it! This is still my favourite song out of them all on this CD!

Then comes "See Now", which begins with an interesting double harmony vocal opening featuring both Melissa and guest musician Carol Lee Cooper, who chimes in throughout the song. The violin playing returns from "Prelude To A Kill", and it really adds more of an epic, grand feel to the song. I love symphonic elements in music, so this is awesome to hear from a local band! Another standout, and it's nice to see some variety like this!

After that, Bad Side turn things back up with "My Body Shakes", another up-tempo rocker that I like almost as much as "You're So Hot"! I can't really add anything new to say, it's just a great great song just as I've come to expect, you'd have to listen to it. But oddly, the song ends with what sounds like someone trying to find something to listen to on the radio by turning the dial to find a station. Odd, but I recognize some of the DJs from real local stations, which is cool!

Back to music, with "Filthy Nasty", which is different than most of the songs by the tempo and playing, things just sound a bit "different". Good song though, no dead parts and the band clicks real well! Nice pace to enerything, no complaints! Then we get "Done Anyway", which sees the return of the talkbox from "Soulkiller" (though it's a bit overused in my opinion.) It's a good song though, dependably heavy and catchy throughout, with interesting use of multiple vocal tracks near the end! Not my favorite, but by no means a bad song either!

Then we get the final song on the album (not counting bonus tracks), "I'm A Moron", which begins with an intro involving a guy encouraging his friend to go talk to to the singer of the band (probably referring to Melissa). The song seems to be a parody of loser guys at shows that try to hit on her after shows, but I can't prove if it's based on reality. The song's pretty funny, making fun of these types and bashing them. Melissa's singing also takes on a bit of a mocking tone too, it perfectly fits the lyrical content! Great song! The bonus tracks are a "piano mix" of "I Will Come To You" which just features Melissa and the piano & no backing instruments, and a "radio mix" of "Done Anyway" with swears substituted. Nice bonuses, especially when I could get them this easily!

Overall, it's a great first album from Bad Side! Now it's not perfect, some songs just float along without a lot of variety, and I really wish the instruments had a better mix, but keep in mind, this is their first album. The production values and instrumentation all will get better, and by the time "Bad Side II" came out, they were definitely sounding as good as we know them now. It's not as dramatic a production leap as Gates of Winter made from their original EP to Lux Aeterna, but it's really noticeable.

Even still, Bad Side proved their great talents on this debut album, and I recommend checking out "You're So Hot", "My Body Shakes", and "See Now", excellent songs! Can't wait to hear more from Bad Side, and I'll be sure to review their other albums down the road on the SMS! And check out Melissa on 99.5 Yes FM weekdays from 6-10 AM! So that was this month's CD review, and next month, I've made no surprises about what's ahead! I will 100% be reviewing Woods of Ypres' brand new release "Woods IV: The Green Album"! Not sure what day it comes out, but believe me, that's what I wanna review! Then in November, saying that it's out by then, I'll review the new Sykotyk Rampage CD! Anything past then is up the air, but I'll update you guys to schedule changes as albums come out and get in my hands! That's all for today, news shall return this weekend (here's hoping.) Thanks guys! CHECK OUT BAD SIDE!!!

it's a good disc but the next 2 are certainly better!