Hey everyone, lots of news to get to today, and we'll start with LOCAL CONCERT ALERTS!!! Also, I have stuff coming out of last night's Cancer Bats/Billy Talent show, new video footage of a local band's one-off return, Lion Ride's newest battle of the bands, and a local radio station's logo contest!

SATURDAY NIGHT (short notice again, my apologies), local hard rock cover band Turner Up will be playing for the first time at The Canadian Nightclub! Yes, they're heading up town for this show, and it looks like they have a lot planned for this one! The band are giving out "Official Crew Member" shirts to the fans, and are going to have some professional filming done as well for a video! Might there be an original in store? I don't know, we'll have to find out this weekend! It looks like they're going to try and make this their biggest show yet, so there's all the more reason to go! I'm thinking I might head on out there on Saturday myself, I'm overdue to see Turner Up as it is! No cover charge has been announced, a start time of 10:00 PM is listed on the Facebook event page, confirm your attendance there! I'll keep you guys posted with any updates I come across, and hopefully I'll be there!

Also, this is worth noting, Turner Up's weekly jam nights at Foggy Notions have been postponed due to "circumstances beyond our control", according to a post on the jam nights' event page. Apparently though, there is a new band providing the music on Wednesdays at present, but the door is not shut on Turner Up there, so if they return, I'll let you know! Now as you may know, yesterday was the much-hyped Billy Talent concert at The Essar Center! Remember, it DOES have a metal connection, as The Cancer Bats opened the show, and there's stuff online from the concert! First place most people would go for a review and photos would likely be SooToday, and Donna Hopper indeed has an article up about it! Only about 2,000 fans shown up, which apparently was below expectations, though she praised the concert and environment! I find it curious that she mentioned that everyone was there for a different band, doesn't really seem like a large unifying fanbase was there specifically for one band like usual. She has photos, but they aren't online yet, I'd expect them later today.

If you want photos, other sites have you covered! The Sault Star's Rachele LaBrecque has a photo album from the show online, but if you're hoping for shots of Alexisonfire, Against Me!, or The Cancer Bats, this won't be what you're looking for, every picture is of either Billy Talent or the crowd. Great quality, but just one band? Lucas Punkari from SooNews.ca got more photos, though none are of Against Me! or The Cancer Bats. However, he does go into a lot more detail about the concert itself, he said that The Cancer Bats delivered a "fine half hour set", even if their metal sound wasn't expected from many concert-goers. Frontman Liam Cormier told the crowd "The last time we came in 2006, I think like two people watched the whole set, so to have this many people see us tonight is awesome!" Nice to see them finally get a good turnout here, I wish I could have seen them in 2006! And yes, they covered "Sabotage"! Check out Lucas' review at this location!

Is there video from The Cancer Bats' set online yet? Yes, actually, though with a slight catch. It's only about 9 seconds of The Cancer Bats' set, starting 3:35 into this clip, which is partly a video blog posted by YouTube user HAliRoarz! The rest is clips of the other three bands, with about 30 seconds of vlogging at the end. It's the only video I've seen of any segment of the concert yet, the quality isn't terrible but the sound is a bit patchy. Nice to see footage of the show though, I bet there's more coming! Check it out below, and remember, the concert footage begins at around 3:35!

Next up, we have video footage online from the return of a notable local punk/metal band! Well, even if it is just a one-off, it's still new stuff! As you may remember, the original lineup of Fitswitch returned for a one-off performance at The Elks Hall on Saturday night! It was in honor of the stag and doe for original guitarist Kevin Powe, who joined J.D. Pearce, Rick White, Andrew MacDonald, and Larry Mousseau for a night full of classic Fitswitch songs! I didn't consider this as a real "concert" because really, it wasn't, it was a stag and doe graced with the presence of awesome music, and it wasn't a publicly advertised event. And though it'd be awesome to see the original lineup again, I figured I wouldn't take a ticket away from someone who was a close friend/relative or expected guest. Luckily, for those of us that didn't make it out, the band uploaded an HD-quality clip of their performance of the classic song "Bitch Anthem" onto their YouTube channel! The description says the reunion comes after "4 years of no practice", but it still sounds good! The video was filmed by Krista Kelly, and the quality ain't bad, check it out below! Hopefully this isn't the last of Fitswitch we'll get to see, cause I bet even a one-off show at Coch's Corner like last March would draw! Fingers crossed!

And now we come to some more news from the Lion Ride camp! They sure have been busy lately, haven't they? They'll be one of four bands competing on Thursday in a Battle of the Bands in Toronto, but this one has a prize-related twist! They're in The Great Canadian T-Shirt Battle, with the winner recieving 200 free custom band t-shirts! That's the only prize, but for what it's worth, the four judges are all music industry professionals, so this could be a chance to make them take notice of Lion Ride as well! No word on who's playing bass for Lion Ride at this battle, my money's on Carmine Romano again, but the band haven't said. It will be taking place at The Hideout in Toronto on Thursday, best of luck to Lion Ride! I wish I could be there! My sources for this info are from band members' Facebook statuses. As for their Ernie Ball Battle quest, they are currently in 79th place, just five votes out of 74th. VOTE FOR THEM BY CLICKING HERE! (Also, Sykotyk Rampage have just 29 votes, 63 out of the top 100. VOTE FOR THEM TOO!) 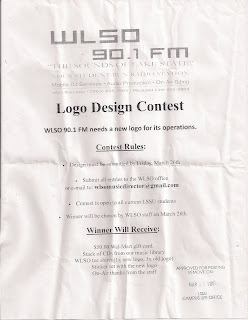 And finally for today, a local radio station is looking for help designing a new logo! WLSO 90.1 FM: The Sounds of Lake State announced on campus on Monday that they are looking for student-created designs for a new logo! This was initially announced via e-mail last month, but public campus notice didn't start until Monday. This is ONLY OPEN TO CURRENT LSSU STUDENTS, so keep that in mind if you want to enter. Basically, what you need to do is create a new logo for WLSO (no listed limitations), and submit it to either the WLSO office at the Cisler Center on campus, or e-mail it to wlsomusicdirector@gmail.com! You have until FRIDAY to submit your entry! The winner will be chosen on Sunday, and will win a nice selection of prizes, including the adoption of your design as WLSO's new logo, a $50 Wal-Mart gift card, a stack of CDs from WLSO's music library, two WLSO t-shirts (one with the old logo, one with your design), stickers with your logo, and an on-air shoutout!

So there you are, Lakers, you could design your campus radio station's new logo! It needed an upgrade anyway, to be honest, it looks too plain for a radio station. I've always been a fan of WLSO's, I love the metal blocks that air (thanks to the students who man those slots), and the idea of giving students the power to control the airplay is just cool! If you go to LSSU and have some drawing or graphic design talent, send an entry in! And listen to WLSO at 90.1 FM! (P.S., sorry for the picture quality, I didn't think to not fold the poster.)

That's all for now, lots more news and updates in the near future, including the event page for an upcoming show, more photos/video from The Cancer Bats' show, and more! Stay tuned!
Posted by The Sault Metal Scene at 11:47 AM