After a busy weekend of personal commitments, we are back on this Sunday morning with a new news post, largely covering the Sault Michigan area via some new/old videos and a LOCAL CONCERT ALERT for next month! To round things out, we do have some lineup updates for a major Sault Ontario festival to round things out, so here's what you should know!

The third annual Rudyard Musicians Festival will go down at Rudyard Township Park (18725 South Mackinac Trail) on Saturday, August 18th! This late-summer concert event is back for a third go-around, with all proceeds going to Rudyard Area Schools' music and band programs once again, which remains a great cause! E.U.P. music lovers can take in a pig roast dinner, concessions, and camping before and after the festival, among other fun stuff, so visit the official Facebook page for full non-musical details! Promoters are again sticking to returning bands, with only 3 acts not back from 2017 (The Karstens, The Neighborhood Dogs, and Denny Verrett), and only two acts are debuting, so if you liked past years, expect a familiar day of entertainment! This year's only verifiable "hard rock" band is Project 906, and while it's great to see them back for year #3, note that they're on much earlier this time, namely at 3:00 PM. Local classic rockers and festival organizers Steelhead will headline this year's installment at 11:00 PM.

Classic rock favourites The Whole Shabang are back at 10:00 PM, while 2016 performers Second Offense will return to this event at 9:00 PM. Most remaining bands are (once again) country or bluegrass-centric unless otherwise known & stated, including Robert & Bob Malaski at 8:00 PM, The North Country Band at 7:00 PM, and The Wednesday Night Headliners (featuring Brian Harrison) at 6:00 PM. This year's debuting acts are new local country/western trio Rusted Spurs at 5:00 PM and St. Ignace country/folk artist Patrick Springsteen (of The Springsteen Brothers) at 4:00 PM, while the pre-Project 906 acts are Kevin Blakeney at 2:00 PM, pop singer Hayley Malaska at 1:00 PM, Jimmy Williams at 12:00 PM, and Traverse City's New Jazz Trio leading off at 11:00 AM. Musicians Fest III is once again an ALL AGES event with $5 admission at the door, save for kids 10 and under, who remain FREE. It's great to see another stacked lineup of regional musicians back for an excellent & relevant cause next month!

After two successful installments (even with the "NO METAL" disclaimer for last year's band search), this has proven to be a reliable and positive event to help the area school band programs, and hopefully this year's meets the same goals while entertaining large crowds at the same time! Visit the above links for current details on this year's Rudyard Musicians Festival! 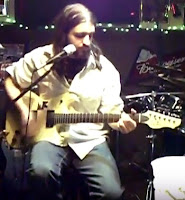 Next up, here's a surprise video discovery of a local singer/guitarist covering some heavier music at two Sault Michigan concerts seven years ago! The performer here is Jude Reed, who I am not familiar with from our E.U.P. coverage, but he was the opening act for defunct local metal band Hammerspace for at least two of their early-2011 concerts, and shared a video from each onto his YouTube channel at the time. The latter video comes from their St. Patrick's Day concert at Zim's, where Jude covered The Cure's "Just Like Heaven" & The Foo Fighters' "Best of You", as part of a longer set that Jude lampshaded as being "shameful" aside from these songs. I more dislike the audio quality of the camera, as Jude seems to have a good grasp on these covers! The longer first video is embedded below, from the February 20th concert at The Merchant's Bar, and it features Jude covering Nirvana's "About A Girl", The Beatles' "While My Guitar Gently Weeps", Elvis Costello's "So Like Candy", ...

...Leadbelly's "Where Did You Sleep Last Night", Nirvana's "Pennyroyal Tea", David Bowie's "The Man Who Sold The World", and The Animals' "House of the Rising Sun", so click each link to go to that song. Clearly a fan of Nirvana's MTV Unplugged album, Jude was honest about making mistakes during this concert (especially the solo during "So Like Candy"), but he is a good guitarist with a melodic yet gritty singing voice! Again, the camera's audio is the Achilles heel of these videos, not to mention the usually dark lighting, but if you can get past that, there's good qualities here, and hopefully Jude's kept at his music! Give his videos a look above & below!

Finally for today, here's three assorted shorter news items, all being lineup clarifications for hard rock bands playing at Rotaryfest's main stage on SATURDAY NIGHT! As usual, these are in alphabetical order by artist name, and all are cited from the Sault Ontario summer festival's official program:


That's all for today, but stay tuned for more news and notes on the site this week, especially with Rotaryfest looming large! Thanks everyone!
Posted by The Sault Metal Scene at 11:54 AM