Before we get to the stuff in today's post, remember to vote in this month's polls on the left of the page! What distance from Sault Ste. Marie is "local" to you towards bands and concerts we cover, and what Michigan counties are close enough for you to consider them local? PLEASE vote in the polls A.S.A.P., your input could help decide if/how much we expand in the future! Now, in today's post, we have details on this month's CD review (and the former local band responsible for it), another defunct band's newly found material, and new "Woods V" reviews, but leading off is a new band of sorts, so here's what you need to know!

First today, here's a newly discovered local band to add to our listings, and they are a defunct Sault Michigan hard rock act named Twisted Manikin! I've been aware of them in recent years, but only now did I realize how heavy their available material was. Active only in 2008, their main lineup consisted of singer/bassist Samantha Raycroft, former Half Stupid drummer Jordan Gendreau on guitar, and Aaron Sheppard on drums, though they briefly enlisted a second guitarist named Matthew LaPointe early in their run. As best as I can tell, Twisted Manikin were active from February 2008 until that fall when Samantha moved out of town, and though I can't verify if Twisted Manikin every played a live concert, some members played together in at least one local battle of the bands the previous year. Describing themselves as sounding like "deliverance", videos of the band are available on a few different online pages, including both the band's and Samantha's MySpace pages, though neither of those have their full trio lineup. That said, Samantha did post one video of all 3 members together playing an original named "The City Is Burning" onto her YouTube channel in September 2008, and it doesn't sound too bad!

Their pages describe them as hardcore and punk, but this is more of a straightforward hard rock number with clean vocals, and though the audio quality is mixed, I really like Jordan's guitar work! Catchy riff and a decent solo, but Samantha's singing is almost inaudible, and it can get a bit repetitive despite it's length. There was promise with Twisted Manikin though, and it's a shame they didn't expand too far beyond what's available online, but check out "The City Is Burning" below, and Twisted Manikin are now in our inactive Sault Michigan band links!

Speaking of defunct Sault Michigan bands, does anyone out there remember the mid-2000s death metal quintet Insipid Brutality? No, they haven't reunited, but guitarist Tyler Dettloff (now frontman of the Marquette rock band Midnight Manual) resurrected the band in a way last month via new band pages on Facebook and BandCamp! Beyond just being posthumous pages for Insipid Brutality, one very cool bonus is also being offered on the new pages: an album! Nine original songs (six newly available online) recorded in Kinross during Insipid Brutality's heyday have been posted for sale on their BandCamp page linked above as a self-titled digital album, after restoration work by Kyle Van Howe, and you can buy it for any price you want! If you want it free, download it for free. If you wanna pay $10 (or less, or more), you can do that as well, which I recommend to support the band and the work they put in all those years ago! As some of you may remember, Insipid Brutality's lineup included Tyler on guitar, his old Condemned bandmate Teagan Sanders on vocals, former Swayze Train guitarist Scott Savoie, Louie Schmit on bass, and Matthew Georgevich on drums.

With only two band members living in the area now that I can tell, a full fledged reunion is unlikely, but death metal fans and old Insipid Brutality followers should definitely like the new pages and album! I have yet to fully listen to it, but I did pick it up yesterday, and because it's officially on sale and not strictly a free posting, I'd like to officially confirm that Insipid Brutality's self-titled album will be this month's CD review! Nothing else new seems to be coming out within the next two weeks that I've heard, so hopefully this review will be interesting and attract some more posthumous notice! Note as well that this will be the first time that we've reviewed two Sault Michigan albums in consecutive months, which is a good sign! Keep an eye out for this month's CD review by the end of the month, and pick up Insipid Brutality's album at the above links! 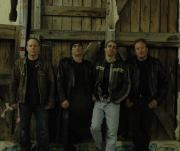 Also leading from newly discovered older recordings, remember when Sault Ontario hard rock cover quartet Sneaky Pete broke up in April and deleted their Facebook page? Well, if you missed the material posted there and a more substantial online presence, then you're in luck, as I only discovered their MySpace page yesterday! Compared to what else is left, this page is a lot more informative and detailed for Sneaky Pete's sound and makeup, and if you miss their live concerts, then you'll love the posted audio recordings! 12 covers recorded presumably at live jam sessions last year are available to stream, ranging from AC/DC, Alice In Chains, and Kiss tracks to Duran Duran, Three Doors Down, and ZZ Top classics, along with two Green Day songs (and more), so definitely check the above links to stream them! These all feature their classic lineup, and are a vast improvement on their 2010 demos with their original lineup, which had much worse recording quality from what I remember. I hope that their MySpace page remains online, as this material deserves an audience and it shows Sneaky Pete's talents well, so check out their material at the above links, and I've replaced Sneaky Pete's link in our band listings to reflect this find!

And finally, here's some more recent reviews of Woods of Ypres' final recorded album "Woods V: Grey Skies & Electric Light"! Earlier this month, Jason Rankin from the University of Windsor newspaper The Lance gave "W5" a short and positive review, and though he oddly described two songs in-depth without mentioning any others, he called it an "enriching melodic musical experience" that shows all the good things that they had to offer. Alright review, click here to check it out! In a lengthy March review on Heavy Metal Now, writer "Brin" gave "Woods V" a 10.7/11 (love the Spinal Tap-esque scoring), calling it "a journey" and a "damn near masterpiece", barely saying a bad word about any of the included songs. Nice detailed review with insight on each track, so give it a look at this location! Finally for today, Marcel H. from the Dutch webzine Lords of Metal gave this album a more mixed score of 61/100, and though the translation is iffy, he is very honest with his feelings. He looked past David Gold's passing and saw the album as being too long and borrowing too heavily from Paradise Lost & Katatonia without vocal passion, even questioning why Earache signed them. I'm all for not overhyping "W5" posthumously, but even though I disagree with most of his views, I applaud his brutal honesty, so click here to see his review, and stay tuned for more critic's views of "Woods V"!

That's probably all for today, but stay tuned for more news and notes shortly! Thanks everyone!

Posted by The Sault Metal Scene at 2:32 AM