Well guys, the weekend's schedule is largely quiet for metal and hard rock concerts at present, but is there anything heavy going down that I can verify? Yes, as we have a LOCAL CONCERT ALERT for a show TOMORROW (and a related lineup change), and that leads off today's post, but also stay tuned afterwards for a local band's recent interview, LemmaFest updates, a young local band's first video glimpse, and more! 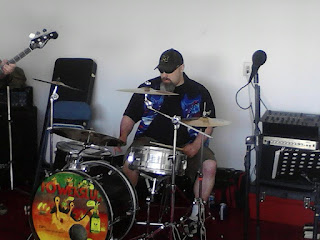 Apparently, Sault Michigan hard rockers Powerslug will return to The Corner Pub Bar & Grill for perhaps the first time of the new year TOMORROW NIGHT! I actually learned about this show from a different source, that being prominent local musician Bob "Orb Hearthstone" Helsten (Wearwithal, ex-End of Existence, etc.) on his personal Facebook page yesterday. As it turns out, he's actually their current drummer (replacing Ivan Schliska), and recent postings indicate that he joined the band around the time of their name change from River Witch last August. However, note that I haven't found any postings from Orb from before April referring to Powerslug, so take that for what it's worth. Either way, the band's lack of an online page precluded me from hearing about the change when it happened, and I apologize for being so late with word here, but it's good to see Bob drumming live again! He's definitely talented, and with Great Bodily Harm dissolved, it's nice to see him hitting the local stage still, even if details on Powerslug are hard to source! Best of luck to Ivan too, and though I don't know why he left, hopefully we hear more from him at some point! As stated above, this talented hard rock quartet will hit the stage at The Corner Pub tomorrow, and they'll be on at around 10:00 PM with no announced cover charge and a 21+ age limit.

Though I wish Powerslug had an online page of some kind or video footage to keep fans abreast of any songs, lineup changes, or upcoming dates, there is clear talent in Powerslug's lineup, and I know that their show tomorrow will be a great time, so if you're in the mood for some hard rock on this quiet concert weekend, go chug your mug with Powerslug tomorrow night at The Corner Pub!

Next up, here's a new article on local horror punk/metal quintet Frightlight! Lydia Peever from the fittingly named Ottawa horror culture website Ottawa Horror recently interviewed singer Johnny Pints towards an article/contest for their site on Wednesday, and it's a nice read! In the article, Johnny discusses the band members' love for horror movies, the inspiration for the Frightlight name, and some horror links to some of their tracks (including hinting towards a They Live-inspired new song), while Lydia also complimented the band's artistic style and the sound of their "It's A...Live" EP, and expressed hope that Frightlight will play in Ottawa down the road. My only gripe is that they incorrectly credited the Die Mannequin show earlier this month as drummer Chris FreakNStein's second live show with Frightlight, when it was his fourth (following the Misfits gig in Toronto, the Coch's Corner Halloween party, and Dead In The Van), but the rest is awesome and gives Frightlight some well deserved press! As well, a contest is also featured there where the winner will receive a large Frightlight t-shirt, two copies of their EP, three pins, and four stickers, so if you wanna enter, e-mail contests@ottawahorror.com with the name of your favourite horror-themed band before 1:00 PM TOMORROW!

It's great to see Frightlight spreading the dead far beyond the Soo, and it's a nice complimentary article all around, so give it a look at this location, and enter the contest if you can to win a cool Frightlight prize package!

Thirdly, here's the latest updates relating to the second annual LemmaFest outside of Dondee Lanes on June 23rd! There's been a change to the band order for the festival, as local metal trio Scofflaw and local cover rock quartet Chump Change have swapped slots, with Chump Change jumping back to a 3:00 PM set and Scofflaw now closing the outdoor stage at 9:00 PM. The switch was made due to a booking conflict for Chump Change, presumably due to an existing concert lined up that evening, as per drummer Jason VanLuven on the LemmaFest Facebook page. Not too drastic of a change, but it helps all parties, and it does stack the deck more for metal in the evening, so make note of this lineup alteration! Also, LemmaFest organizers have announced that some proceeds from this year's event will go towards the Grosse Pointe Music Academy's Guitar Camp in Sault Michigan this July, and there's an attached contest deal going on with this event, so click here for all the details on that! This could be a fun and rewarding way to get young prospective musicians in the area a chance to learn more on the guitar, and it's awesome to see LemmaFest supporting the cause! Check the above links for more on LemmaFest, and stay tuned for updates as they roll in!

Also, here's some more recent updates from new Sault Ontario hard rock band Acention! Band members have frequently been updating their Facebook page with new stuff, so here's some of what's been posted over the last few days! They've confirmed that guitarist Dalton Boissineau is handling vocals at the moment (replacing Danielle Wierzbicki), and they've also posted a bunch of new band photos (including a new logo) to go along with a bunch of recent status postings. Most have been teasers for original material & covers they're working on, including a cover of The Red Hot Chili Peppers' "Strip My Mind", but most recently, they've posted their first video footage! It's a Facebook video (so I can't embed it here), but it's of Dalton and guitarist Josh Willet working on an original song on acoustic guitars, and this is a solid start, but I definitely wanna see this expanded on with bass and electric guitars and so on. Click here to check it out, and stay tuned for more news and notes from this promising young band as it all comes in!

And finally, here's three assorted shorter news stories from the last little while, and as usual, these are in alphabetical order by band or festival name:

That's probably all for today, but stay tuned for more news as the weekend rolls along, including this month's Saultites In Out Of Town Bands Profile TOMORROW! Thanks everyone!
Posted by The Sault Metal Scene at 2:29 AM