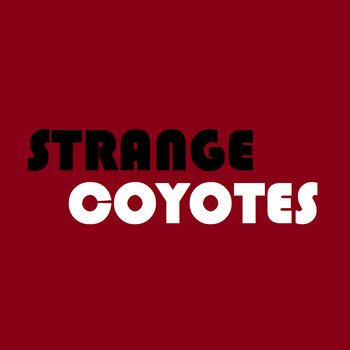 Finally, it's time for our last monthly feature post of 2013, and it's our 54th CD review at The Sault Metal Scene, as we're looking at new local funk metal trio The Strange Coyotes' self-titled debut album! Surprisingly released on November 13th (just two weeks after their launch), this was recorded in an improvised jam style at PaperClip Productions earlier that month. Featuring singer/guitarist Chase Wigmore and bassist James Watterworth alongside drummer Mike Haggith, this album was released via The Strange Coyotes' Bandcamp page on a "name your price" model (similarly to Insipid Brutality's posthumous demo), so while it can be downloaded for free (and streamed there too), it is officially on sale and is probably recommended to be bought at some price level. Note however that plans for a physical release have not been elaborated on at present. Featuring 7 songs stretched across 27 minutes of music, let's begin our last CD review of the year by looking at the opening song!

Starting the album with it's shortest track, "Cosmic Trigger", which builds with a funk rock instrumental section for most of the first half before vocals kick in, transitioning from a bouncy dream-state to higher pitched screams. The song ends almost as quickly as it begins though, and it feels like just the first half of what should have been a longer track. The loose feel and mood changes are nice though, and despite being an anti-climax of sorts, it's a nice prelude to the longer songs to come! It's followed by "Squatter's Remorse", which leads with some guitar improvisation from Chase and vocals that have a solid heavier flow, but though it builds in energy, the instrumentation doesn't gain a lot of traction and boosts of intensity like I was hoping, aside from some nice guitar work midway through. Chase's riffs are very nice, and Mike's drumming is solid, while the closing half of the song takes on a spacey experimental vibe that has a nice ambiance! That random growl seemed badly out of place though. Overall, this is a solid track that gives me more of what I expected, but it felt like something was missing, especially at it's length.

Third is "Fuckin' Oddies, Bro!" (presumably namedropping The Oddfellows Hall in the title), which opens with some confrontational warped speaking before the song actually begins, with Chase providing lead vocals in this somewhat folksy rocker that feels like a fuller adaptation of one of his solo songs. The picking and vibe doesn't feel anything like "Squatter's Remorse", and I like the insanity, evil vocal flourishes, and strange goings on for this track, which feels the most so far like something that truly came from an improvised jam performance. My only complaint is it ends too soon, as the last stretch has a fading heavy riff that (again) sounds like it's leading somewhere with no resolution, but this is my favourite early track on The Strange Coyotes' EP so far!

The next song is called "Therapy (Is Not For The Weak)", which opens irreverently again with some funk bass work and background yelling before some weird experimental vocals coupled with growling and drumming (even some circus-esque guitar work) kick in, before moving into what sounds like a stretch of music played backwards, before ending softly on guitar. Definitely the most unique song on the album so far, it's honestly hard to describe, but I'll admit that I was never bored, and I didn't hate it (I'm curious to hear how this is tackled live too!) Song #5 is "Prostitute", another shorter track, but it starts with more processed vocals (including some demonic effects), before completely shifting gears into a softer acoustic rock track. The singing is somewhat unintelligible, but the jarring opening & ending effects aside, this has the closest feel to a "standard" song, if feeling somewhat unfinished again, like it faded out too soon. Interesting softer change though!

The penultimate song on this album is "Third-Degree Syphillis", a 5 minute original that really drags it's heels early despite nice instrumentation. Low vocals and a deliberate minimalistic pace are the tale of the tape for the first 3 minutes (they really should have trimmed that down), but the last stretch finally builds some energy and aggression, with evil laughing vocals, very solid drumming from Mike, and more of a direction that helps out a ton! If The Strange Coyotes had severely cut the opening 3/5ths down, this would be even better, but the somewhat tedious opening almost took the wind out of the song's late sails. The album ends with "Pissed Drifter", which revisits the backwards playback of "Therapy" early before drifting into a more creative and louder stretch of deliberate instrumentation and effects, including some more offbeat and dream-like vocals, so while it's more interesting to listen to than "Third-Degree Syphillis", it meanders longer and doesn't have the spontaneity of their live performances or some early songs on this album (but the guitar work is cool late!)

So, what are my final thoughts on The Strange Coyotes' debut album? I liked a lot of it, but something was lost in translation between their concerts and this studio jam. Improvised or not, The Strange Coyotes (and their predecessors Project Legion) have a looser, freer-flowing, more spontaneous, and heavier sound in concert, and I don't think the album captured that the way that a live concert recording would have. Individually, the performances & production were both solid, with Chase, James, and Mike all highly impressing on their instruments, and Chase & Mike's vocals fit the material well, so I have no qualms there! I liked the first half of this album much more than the second, and the creative post-effects was a nice touch, but the music seemed to trail off into a more reserved and deliberate tone that I don't find to reflect their strengths. As well, many songs seemed to have stretches that led nowhere or were anticlimactic, but when they were on (like on "Fuckin' Oddies, Bro!"), they were on!

Overall, The Strange Coyotes' digital album is entertaining and a welcome change from some other contemporary local metal bands, but I'd like to see future studio recordings better reflect their live concert experience (perhaps by adapting more of the members' solo material into this style?) Pick up "The Strange Coyotes" at the above links! Stay tuned early next month for our next CD review at the SMS, when we look at local thrash band Pillory's debut demo "Cringe At The Cross", and stay tuned for more news (plus our look back at 2013) soon! Thanks everyone!
Posted by The Sault Metal Scene at 1:39 AM