First of all, notice the new banner image on the SMS? Extremely obvious why that's up! Kiss are coming on TUESDAY! After that show, I'm gonna finally give Sykotyk Rampage their due and post the "22" banner and logo, because I'm overdue for that as it is, and they deserve the extra press for the album, which is quite entertaining! Review coming in 2010! But now, it's time to review the Three Days Grace concert from last night! (Stay tuned afterwards for a LOCAL CONCERT ALERT and some news on Silver Dream!) 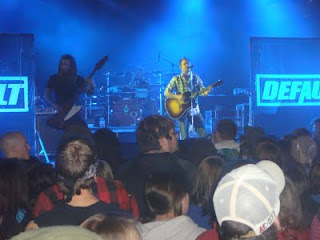 I was worried I might be late due to my late class last night, but no worries, I didn't miss a thing! This is only my second show at The Essar Center where I was on the floor (Jackyl was the first), and even though the crowd was noticeably smaller than Three Days Grace's first show here in January 2008, it was still packed! I felt like a cow in a stampede! The first band to take the stage were Default (pictured), and I'm gonna be honest with you: I didn't really like them all that much. Nothing they played really had a "kick", nothing really got that heavy, and I dunno, they just didn't cut it for me. Now they are musically talented, but I only really enjoyed one song, "Deny", that had some hard rock bite and it was their closer. They weren't a horrible band, not by any stretch, just OK.

Then The Used took the stage, and I'll give them credit: They sure do have some eager fans! I couldn't hear Bert McCracken over some guys singing along right behind me, and there were a lot of Used shirts floating around! But musically, they just weren't my thing. They definitely had more energy and enthusiasm than Default, but I'm a metalhead, pop punk doesn't pique my interest. I'm not the right guy to comment on The Used because I don't follow that genre. They played their instruments well, but I wasn't a fan of their stuff. I guess I could add that Bert was slightly amusing, particularly with the "Billie Jean" cover!

But when Three Days Grace took the stage....oh man, they were AWESOME! They played all their hits like "Never Too Late", "Pain", and "Home", as well as many songs off of the new album, like "Break", "World So Cold", and "Goin' Down", and lots more! Nice stage set-up too, the band had lots of room to move around, there were tons of lights and stuff on their backdrop, and Neil Sanderson's drumkit even spun around, which was interesting! They were just as good musically, if not better, than they were last year! Adam Gontier is a great frontman, excellent voice with a unique quality to it! The band were solid throughout musically, though I wish Barry Stock would play some guitar solos, that'd add a lot to the songs.

They never sucked once last night, even when Adam's voice started giving out later in the set. Neil got his moment in the sun too, getting a keyboard/drum solo which was cool, especially with the turning kit! And when they played "Home", the band was on fire (literally), as flames shot from the stage! You could feel the heat, though that got countered when I got hit with some water from a thrown watter bottle. The crowd, though noticeably smaller than last year, loved every second of Three Days Grace, and when we realized that Adam was singing "I Don't Care" (originally by him & Apocalyptica) BEHIND the crowd near the sound area, half the people on the floor ran to him and followed him back to the stage! Good old devoted fans, huh? They closed their set with "Riot" (everyone had been screaming for that song), and there were some decent pits for that song! Luckily, they had an encore with the songs "Just Like You" and "(I Hate) Everything About You", capping off a great set!

Overall, I had fun! I won't put the musical quality above the Heaven and Hell show, especially when I wasn't fond of the openers (Seether and Econoline Crush were much better), but Three Days Grace made up for everything! I know Three Days Grace aren't everyone's cup of tea, but I've always liked them, and they delivered exactly what I hoped for last night, and more! I have many photos (yes, there's closer up ones than the ones I'm showing here) posted over at our official Facebook page, so click here to check them out! In my next post, I'll mention any videos or site reviews from the concert as I hear them, cause there will no doubt be lots of stuff to share!

Here's a show from a venue you may not expect: On Friday, December 18th, Caveman Morrison frontman Tym Morrison has scheduled another concert, this time from...Station Mall?! Yes, the center of it all will be hosting a two hour Tym Morrison set next Friday, as he plays a set of acoustic covers and originals outside of Zoo Zoo from 6:00-8:00 PM! Interesting, I've never heard of anyone remotely metal playing at Station Mall, hopefully he gets a good reception from all the shoppers! For full details and to confirm your attendance, visit the official Facebook event page! And remember, following his set at The Station Mall, he'll return to The Big Cheese in Heyden for another acoustic show, details on that concert at this location!

And finally, I've learned some more about that new local band, Silver Dream! No pages yet, but thanks to their frontman adding me on Facebook, I can tell you the full lineup! As it turns out, Matt Hicks isn't the only former Dirty Virgin member in the group, as former guitarist Matt Clement is a member of Silver Dream too! The band's frontman is Matt Silver, who I seem to recall playing some local venues as a solo act (maybe I'm wrong), while the bassist is named Mike LaRue! The band have posted some photos in a Facebook photo album, which you can check out at this location! All sounds good, I wonder when we'll hear some more about the band in terms of songs and shows? I'll keep you guys posted!

That's all for now, my next post will have any and all updates I can find coming out of the Three Days Grace concert, and hopefully lots more! Stay tuned, thanks everyone!
Posted by The Sault Metal Scene at 12:20 PM