Lots Of Woods Of Ypres News And Notes!!

Well guys, it's been a bit since we had a post dedicated to one band, but this post focuses around one very notable band in particular from Sault Ontario, that being blackened doom metal standouts Woods of Ypres. and though there's still sadness surrounding the untimely passing of David Gold last month, there's also some exciting news to get to concerning the band, so let's get right to most of the Woods of Ypres news I have for you guys!

Let's start with some more news about the future of Woods of Ypres. An official statement has been released by guitarist Joel Violette (who I'd assume is the band's de facto leader now) onto Earache Records' news blog on Friday, where he addressed his feelings towards David's passing and what lies ahead. He noted the additions of Brendan Hayter & Rae Amitay to their lineup in November and their European tour plans for this spring, but admitted that it's hard to say what's next for the band. Joel noted that he and David had a lot of projects planned for Woods of Ypres for the future, and that David would want them to be heard. Whether they'll eventually see the light of day isn't currently known, but according to Joel, the fact that David was the heart and essence of Woods of Ypres will always be kept in mind when factoring in future band activity. As of right now, Joel will focus on promoting and releasing "Woods V" on schedule, and Earache Records will be working closely with the Gold family going forward, but the future beyond "Woods V" remains to be seen. To read Joel's full statement on the future of Woods of Ypres, visit this location!

Personally, while I am a full proponent of putting out unreleased or demo material (like the remaining "Woods 4.5" material and their cover of Bathory's "Lake of Fire"), I don't know how much further Woods of Ypres should be taken after David's passing. Even if the go-ahead was there from the Gold family to continue the band in a live or studio setting, David would be very hard to replace effectively (he basically was Woods of Ypres), and it wouldn't seem right having no original members left if they did. Maybe I'm wrong though, but that's my two cents. As Woods of Ypres or not, I think Joel, Brendan, and Rae should stick together in some sort of band, as I think they have old and new music to share with the world, but who knows what lies ahead. 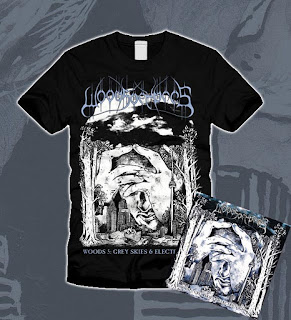 For now, it appears to be a "one day at a time" scenario, starting with the "Woods V: Grey Skies & Electric Light" release, which is still on schedule for a release on February 27th in accordance with the the wishes of David's family and bandmates. I think the release was pushed back from a late January release that David alluded to last year, but maybe that's to include some tribute material in the album booklet (I'm not sure.) If you want to ensure you get your copy of the new album, then good news, as Earache Records are now taking pre-orders for the CD and related packages! Click here to see the differing "Woods V" merchandise, which includes the album on CD for $12, on limited edition coloured vinyl for $20, and in varying packages which include items like t-shirts and posters. The vinyl release includes one record in differing colour choices with 10 tracks and a second 7'' vinyl with just "Alternate Ending" and a special mix of "Finality" by "Woods V" producer Siegfried Meier that is exclusive to the vinyl. Click the above links for pre-ordering details!

Also, since the album was leaked last month, the "Woods V" album cover by David D'Angelo has been edited to include the band's logo and a new title font, and the track listing has been altered as well according to the postings on Earache Records' store. Now, it only lists one of the "Kiss My Ashes (Goodbye)" tracks, while adding a new song named "Keeper of the Ledger". I don't know whether the title was just changed or this is is a new song, but if I hear more, I'll let you guys know!

Definitely consider pre-ordering "Woods V", as Earache Records is offering free shipping on the CD-only packages, and this will ensure that you get Woods of Ypres' last recorded studio album on-time when shipping starts next month. If nothing else, stay tuned for "Woods V" updates as they come in, and make sure to pick it up whenever you can! While we're on the subject of Woods of Ypres albums for sale, David's sister Marie has revealed a list of band merchandise that the family has stock of for sale. As posted on his personal Facebook page on Thursday, the family has copies of all Woods of Ypres CDs except "Woods 4: The Green Album" along with copies of the "Allure of the Earth" and "Home" vinyl singles and two types of band posters. If you're interested or want to inquire about pricing, e-mail Marie at mariechristinegold@hotmail.com, with PayPal transactions made through davidypresgold@gmail.com. Additional merchandise will be made available for purchase alongside the "Woods V" release and (this is news to me) a planned David Gold memorial concert! Details for it are not public yet, but if this goes down (hopefully locally), it should be a can't miss show, and if word comes out about it, I'll let you guys know for sure! For now, pick up your Woods of Ypres albums and merchandise (old and new) at the above links and help cover David's final expenses!

Finally for this all Woods/David post, some new concert videos from Woods of Ypres' last tour have been posted online! A YouTube user named Kyle (online handle "opeth027") posted 5 videos from Woods of Ypres' concert at The Magic Stick Lounge in Detroit on May 11th onto his YouTube channel on Friday. The videos are of Woods of Ypres playing their songs "By The Time You Read This (I Will Already Be Dead)", "Wet Leather", "Awaiting The Inevitable", "Falling Apart", and "Pining (For You)", so click each link to watch each video! Most are full, but "By The Time You Read This" has a late start. The audio quality on these videos is pretty good, as is the video quality, though the lighting doesn't seem to be up to par, especially when it comes to ex-drummer Evan Madden's visibility. Kudos to Kyle for finally uploading these videos, and seeing as this was the closest show to the Soo on their last tour, maybe it holds some extra significance? Either way, these are nice videos, so check them out at the above links, and here's Woods of Ypres playing their song "Pining (For You)" in Detroit from this past May!

That's all for now, but stay tuned for our next Defunct Local Band Profile on Bring The Fallen tomorrow, followed by more news and updates this week! Thanks everyone!
Posted by The Sault Metal Scene at 2:10 PM

im fine with it. dave was woods. they planned stuff out in "great detail". we'll either like or hate it, revere or ignore it. this is better than say take all those details and use in another project. its not the end of the world.

The Earache leak was the label's choice of track listing, and the official release that's up on their site now, with "Keeper of the Ledger", was David's preference for track list. I believe they are going with what were his original wishes.

Good to know, I'm interested to hear what's coming next though. Hopefully no matter what the future holds for Woods of Ypres, be it just releasing old material or something more, they don't to anything that disrespects David's legacy and what he's done to get Woods of Ypres to where they are now. Thanks for the comments!