Here's one more news post before we upload this month's Defunct Local Band Profile tomorrow, and today, we've got this weekend's concert previews, a half-cancellation for across the river this month, the latest updates on a prominent Sault Michigan band, and this week's classic video, but leading things off, here's some LOCAL CONCERT ALERTS!!

Kewadin Casino's entertainment page has been updated to reflect concerts taking place at The Rapids Lounge through May, and while some are previously announced dates are there from earlier postings, there are some new dates from various local and Northern Michigan bands, and among them is a newly announced concert weekend from Trail's End! The hard rock trio featuring Splitshot & Nixxon Dixxon alums Chris Hubbard, Kyle Beaumont, and Jake LaLonde will return to The Rapids Lounge on April 20th & 21st for what will be their third concert weekend at Kewadin's bar since their inception late last year, and you know they should deliver an entertaining set of hard rocking originals and covers this spring! There should be no cover charge, you must be 21 to attend, and both nights should have a 10:00 PM start time. It's great to see Trail's End booking some more concerts, and hopefully these add well to a huge month in the local scene, so stay tuned for updates, and go see Trail's End at Kewadin NEXT WEEKEND!

Also, before we move on to the weekend concert preview, another note on Kewadin's entertainment page is that Swayze Train's scheduled concert weekend there in two weeks has been halved to just a Friday show on February 24th. The reasoning for it appears to be a schedule conflict, as The Rapids Lounge will be showing UFC 144 (go Ben Henderson!) that Saturday. No worries, we'll get lots more Swayze Train action later in the year, so all's good!

Now to a concert preview for this weekend, and in an otherwise fairly quiet weekend in the twin Saults (anyone know of any other metal/hard rock shows?), some hard rocking good times will go down at The Rockstar Bar on Saturday night, as Sneaky Pete will return for another concert! Just three weeks after their last show at the Algonquin Hotel's upstairs bar, Sneaky Pete promise to rock away your winter blahs with their eclectic set of hard rock covers and classic renditions, and if you wanna step out on Saturday night to rock out, you know exactly were to be! This is a 19+ show, they are not playing at The Rockstar Bar tomorrow (just Saturday), a 10:30 PM start time is listed, and there will likely be a cover charge of around $5. For more details, visit the official Facebook event page! It's nice to see another Sneaky Pete concert go down, especially so close to the last one, so definitely consider their show on Saturday night for your concertgoing needs! Check the above links for more details, and for a preview, here's Sneaky Pete covering Saliva's "Ladies & Gentlemen" at The Rockstar Bar last month! 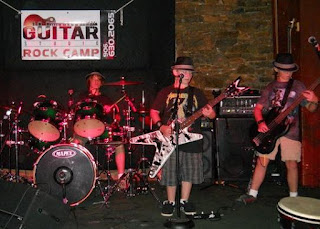 Thirdly today, I wanted to address recent news from the young Sault Michigan hard rock band Abstract, and why we haven't publicized much of that news on here. Last fall, you may remember when they quietly removed guitarist Kyle Burton from their lineup, and it later became public knowledge why he left earlier this year. I initially resisted mentioning the details on here because things got very public and unamicable in recent weeks relating to Kyle's departure, the reasoning behind it, and attached issues, and I didn't want to add more negativity or speculation on to everything. All I'll say on that is that Kyle left partly due to his religious beliefs and their conflict with some of Abstract's planned covers. I'd suggest that such issues shouldn't be publically viewable, as fans will just worry and assume for the worst, but Abstract's Facebook page was recently deleted anyway. That could be at least in part due to a planned name change, as a statement released to the remaining members' personal Facebook pages about Kyle (which is positive, don't worry), ends with "formerly known as Abstract". Makes sense for a new beginning, I suppose, but I don't know why they had to delete their Facebook page over it, they could have just renamed it and deleted posts they didn't want to be seen.

As their Facebook page has been deleted, I've replaced it with their Google-hosted website until we hear more about their new name and any future Facebook presence. This is a lot of disappointing news for sure, but hopefully Jacob, Mike, and Ethan get back into the swing of things this year, as they're very talented for their age, and we miss them around the area! I'll keep you guys posted as updates come in, and best of luck to Kyle in the future, he deserves to get into a new band!

And finally for today, here's this week's classic video! With another light concert weekend on tap, I'm dipping into the archives this week, and I've chosen a video from local classic metal quartet Late & Loud to feature on YouTube! Most videos of theirs are on YouTube already, but one exception is this video from of Late & Loud covering The Surfaris' instrumental "Wipeout" at Foggy Notions (most recently known as Feedback) from last February! This is a popular cover at Late & Loud shows, and they put a good heavy spin on it! The video quality's nice too, but I wish the camera was better positioned to capture Brendan Christie in frame, as he's cut off frequently on the far right. Filmed by an attendee of this concert, you can view the original video on Late & Loud's Facebook page (where it was uploaded on February 22nd of last year) at http://facebook.com/video/video.php?v=1856412968398. NO COPYRIGHT INFRINGEMENT IS INTENDED!! All credit for this video goes to the original filmer and Late & Loud, they did all the hard work, I'm just sharing this video with a wider audience like it deserves! It's a nice energetic performance of a very recognizable song, so check it out below!

That's all for today, but stay tuned for our Defunct Local Band Profile on Shift tomorrow, along with more news this weekend! Thanks everyone!
Posted by The Sault Metal Scene at 5:26 PM