I wasn't expecting to have another post so soon, but when news hits, you've gotta capitalize on it! Today, we have some more "Woods V" reviews, some new videos from some young local musicians, and starting things today, LOCAL CONCERT ALERTS for shows next month and THIS WEEKEND, so here's what you need to know!

We have another concert this weekend that I only just found about today, and if you've missed Whitesnake since their headlining concert at Kewadin Casino last August, then good news, as the next best thing is coming to Sault Ontario THIS SATURDAY! Toronto-based Whitesnake tribute band Still of the Night will rock The Canadian Nightclub on Saturday for a good long night's worth of Whitesnake classics, and even some David Coverdale-era Deep Purple, from what I can tell! I apologize for the late notice on this show, I only just heard about it on a radio ad on Rock 101 this morning, and The Canadian's Facebook group didn't acknowledge this concert until this afternoon. Details on this show aren't too prevalent online, but I believe a 10:00 PM start time is likely, you must be 19 to attend, and I'd expect a cover charge of around $5. Check the above links for more details! Late notice or not, The Canadian is always a good bet for bringing in talented touring Canadian tribute bands, and Still of the Night fit that mold well! Jon Munroe's singing isn't a perfect match for David Coverdale in his prime, but they have the sound down pretty well, and if you love Whitesnake or classic 1980s metal, you'll definitely not wanna miss this show on Saturday night! For a preview, here's a Still of the Night promotional video featuring clips of a few of their Whitesnake renditions!

Also in new concerts, remember last week when I alluded to a planned fundraising concert at The Canadian Nightclub that briefly had a Facebook event page before it was pulled? Well, I don't know what happened then, but it appears to still be a go, so here's the current details! As Frightlight frontman Johnny Pints revealed on the Musicians Wanted Facebook group yesterday, the band has scheduled a special all-ages fundraising concert at The Canadian on March 4th to raise money towards a tour vehicle, so Frightlight can do some tour dates and "bring the fright" to other cities. Depending on the number of bands, the show will run until 11:00 PM on that Sunday, with an undetermined start time. Currently confirmed to join Frightlight at this "Dead In The Van" event are local hardcore quintet As It Stands, classic metal rockers Late & Loud, Desbarats metal band Inhuman Methods (nice to see them increasing their local presence!), and Business Suit Trappers guitarist "Evil" Greg Callaghan in a solo set. More bands are to be confirmed, so contact Johnny at the above links for details if your band wants in on this event! Full details are expected to be released next week, so we should hear more on admission prices and times then, but I can confirm that the show will be licensed in addition to the all ages element.

Frightlight (and Fitswitch) have always been good for supporting causes at fundraising events, and they deserve the support to raise some funds towards some tour dates, so hopefully a huge turnout is there in March for this show! Depending on the size, this could be similar to notable concert events like the Rock 2 Roll skatepark fundraiser from the summer of 2008 at The Canadian, but we won't know the full scale of everything until next week. It sounds very promising already though, and you can definitely pencil me in to attend and support Frightlight! Stay tuned for more updates as they roll in! 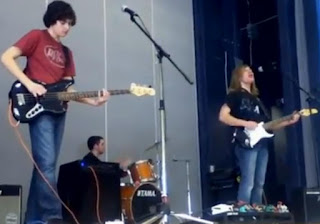 Thirdly today, here's a recent discovery I came across on YouTube that you guys might be interested in. Yesterday, a YouTube user by the name of adamscovers posted three live cover videos onto his YouTube channel from a recent Hawkplugged (formerly Dunnplugged) performance at Superior Heights Collegiate & Vocational School, and two of the videos are hard rock covers! The newly posted videos (which joined a Foster The People cover from last month) are of covers of The Beatles' "Helter Skelter", Alice In Chains' "Rooster", and (as embedded below) Led Zeppelin's "Communication Breakdown", so click each link to check them out! I don't know the performers in the videos, but there's three likely Superior Heights students playing in this band, and I assume one's name is Adam. They're definitely talented, though I find the verse singing on "Rooster" was a bit forced, and the zoom effects on the videos are well edited to emphasize certain band members! I'm curious to learn and hear more from these guys, so check out these new Hawkplugged performance videos above, and here's their cover of "Communication Breakdown"!

Finally for today, here's a few more reviews of "Woods V: Grey Skies & Electric Light" to check out! Last month, "merginator" of the metal blog Headbang or GTFO gave Woods of Ypres' last recorded CD a 4.5 out of 5 in a lengthy review, calling it an "emotional roller coaster" and "definitely fulfilling", while only knocking the song "Career Suicide (Is Not Suicide)" for being boring. It's a nice and well-worded review, so click here to check it out! This past Friday, Rob Liz from the metal site That Devil Music gave an overall favourable review to "Woods V", though the postmortem nature of the review definitely seemed to throw things on a loop. He called the CD "an audio painting full of styles and colours" and termed it "the band's masterpiece", while complimenting the Type O Negative influences and the album's haunting effect. Another solid review with lots of personal reflection, so check it out at this location! Lastly for this chunk of reviews, John Roach from the metal website Xplosive Metal gave "W5" a favourable review of his own last month, calling it a "must-buy" for doom metal fans that was worthy of purchase regardless of David Gold's death, while also complimenting David's vocals & the album's symphonic elements. Definitely another nice review, and it's great to see the first reviews of "Woods V" skewing positively, so check out his review by clicking here, and stay tuned for more "W5" CD reviews soon!

That's all for today, but I should see you guys at The Roosevelt Hotel TONIGHT for the 42nd Rosie metal night! Thanks everyone!
Posted by The Sault Metal Scene at 2:25 PM