Hey guys, it's time for another news post at the SMS, and before we get into it, if you notice that the background is now static on the site, that's on purpose. I thought that'd be easier on the eyes for readers rather than a constantly scrolling background when reading posts, and it's easier for future customization, so don't be alarmed! In today's post, we have some new videos from some local acts, a bunch of assorted news items, and leading things off, a LOCAL CONCERT ALERT, so here's what you need to know!

Local classic hard rock quintet Turner Up will return to the local concert stage THIS SATURDAY, but not at a venue you'd expect. In just their third concert weekend since the new Turner Up's launch last year, they'll be rocking the Sportscentre Bar & Grill at 624 Wellington Street West on Saturday, in what I think is the first show from any version of Turner Up at this spot. For reference sake, the Sportcentre Bar & Grill is beside Wizards Cuts, it's a road over from Carmen's Way, and it's close to the Steelton area, in case you're curious of it's location. We haven't seen Turner Up in four weeks (though 4/5ths of them have played more often in Havadder in between), so if you've missed their brand of classic hard rock covers, then don't miss them at this West End concert on Saturday night! There is no announced cover charge, there's no Friday date this weekend, everything starts at 10:00 PM, and you must be 19 to attend. For more details, visit the official Facebook event page! Though I'm not familiar with this venue at all, Turner Up should deliver another solid set of rocking covers, so definitely consider attending this concert if you can, and stay tuned for more on it later this week!

Next up, here's some new videos, starting with another new album teaser from Sault Michigan/Grand Rapids metal quintet End of Existence! Hot on the heels of their first teaser from Sunday, the band has posted a 79 second trailer featuring a preview of another song from their planned debut album that's coming out on February 29th. The visuals here use similar effects to the first video, though the featured photo is of guitarist Steven Giles. Are we getting one trailer video featuring each band member in the lead-up to the album's release? I dunno, but this is another promising preview, so check it out below, and I'll keep you guys posted as updates roll in! 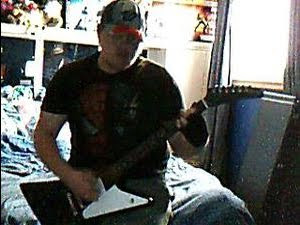 Also in new videos are three new solo performance videos from ApocalyptiCDistroyeR frontman Jesse Middaugh, who has uploaded three new videos onto the band's YouTube channel over the past nine days. One is (oddly enough) a short rough guitar cover of Bruno Mars' "Grenade", which seems out of place, but his playing isn't bad. He also uploaded a new cover of Three Days Grace's "(I Hate) Everything About You", this time with a new electric guitar of his, and he sounds alright on it, especially with a plugged in version, though the transitions between verses and choruses are choppy sounding. Embedded below though is his new original demo, tentatively titled "The Special One", and he shows some nice softer acoustic playing here for this newest original, so give it a look below, and check the above links for more solo and band material from ApocalyptiCDistroyer's channel!

And finally for today, here's three assorted stories from the last little while, and as usual, these are in alphabetical order by band, website, or channel name:
That's all for today, but stay tuned for more news this week, and just FYI, our very next post on the SMS website will be our 1,000th overall! Amazing how fast three years of blogging go when you enjoy what you do, huh? Thanks everyone!
Posted by The Sault Metal Scene at 2:35 PM