We're behind on news around the SMS, so before we add further to the backlog, here's a new news post featuring new recent Destroilet videos, and first, a LOCAL CONCERT ALERT for a big returning concert event! Check everything out, and give our review of Wednesday night's all ages Oddfellows Hall concert a look in the post below this one! 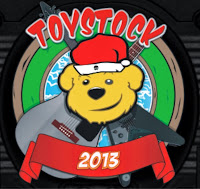 As previously indicated, Toystock will return for a second installment on Sunday, December 1st at The Canadian Nightclub! As you may remember, this ALL AGES event (promoted by Maxx Entertainment) is a charity event to raise donations for Christmas Cheer, with entry by donation of toys, cash, or non-perishable food items, which is a great cause! Like last year, Santa Claus will be on hand, there will be prize draws and refreshments, and in terms of the music, 10 local bands (mainly cover bands and weekend bar regulars) will donate their time to rock out for the occasion! The lineup's mostly different from last year, but four bands will return, and there are some hard rock groups, so who's on tap? According to Local2's article about Toystock, this year's performers include cover rock favourites Stiffler's Mom & Boxcar Junction, alternative hard rock quartet Lucky 13, and party rock mainstays Obsession, all of which are returning from the 2012 Toystock, so it'll be good to have them back!

The six new bands include classic rock cover quartet Redline, Mike Case's Junior All-Stars (the young cover band who replaced Redundant at the Ray Brown benefit), recently reunited hard rock quintet That's Chester (in their first show since the summer), newer hard rock quartet Glitch, new country rock band 2 Buck Beers (featuring Asylum Country and Wishbone alumni), and Turner Up successors The Thrill Junkies, so these bands should add well to the proceedings, especially with most making their Canadian Nightclub debuts! Each band has an hour slotted for this 10 hour event, from noon to 10:00 PM on December 1st, and for more details, check the above links! I will note that this year's lineup is slightly leaning more to classic and hard rock bands than last year's, which had more of a country influence, so that could be a good sign for loyal SMS readers, but this should be a great event regardless!

If you don't get out to see many cover bands on the weekends (or missed Rotaryfest's main stage), this could be a great way to see some talented local veterans rock out for a great cause, so come on out to Toystock on December 1st! Stay tuned for updates on the band order and more as they come in!

We'll close this post with some new Destroilet videos, starting with (finally) footage of their set at the Big Loonie Bus Show at La Cucina in Echo Bay last month! Uploaded to 62nd Chamber Productions' YouTube channel on Halloween (and in black & white for some reason), this captures all but the first couple of songs that they played that night, and I'd try and transcribe the song order and names for you guys, but so many blend into each other and aren't introduced that I probably would screw up a few times. Needless to say, this is another brutal old school hardcore set from these local favourites, and while this is also at the side stage angle, everyone but drummer Matt Waples is visible without a big problem! 62nd Chamber owner Boyd Rendell noted in the video description that they hope to have another "Bark at the Loon" concert in Echo Bay (no date was given), and they want to film a Sabrina Strange interview with Destroilet in the future, which would be cool to see, so keep all of that in mind, and check out almost 38 minutes of Destroilet tearing up the stage below!

The other new video is this music video shot by The 705 Video Magazine and uploaded to Destroilet's YouTube channel on Wednesday! Filmed on multiple cameras at what I believe was their set opening for The Bunchofuckingoofs at The Rosie in August, it's synched up to their studio version of "Eternal Fire", and while it's well edited, Mike and Chris' vocals don't always line up perfectly (the joys of live versions!) Well edited and put together, and a nice close sampling of their fury, so give Destroilet's new video a look below!

That's all for today, but stay tuned for another news post tomorrow, plus this month's "Where Are The New Albums?" updates! Thanks everyone!
Posted by The Sault Metal Scene at 10:00 PM