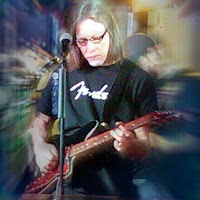 The Sault Metal Scene sends it's deepest condolences out to the family and friends of veteran local rock guitarist Steve Pevarnic, who passed away on Thursday night, according to numerous personal Facebook postings. Details on his final services have not been publicized at press time, so stay tuned to appropriate news sources for word therein. A prominent musician dating back to the 1970s, Steve will likely be most familiar in recent years as the co-owner and namesake of Steve's Music Center at 557 Ashmun Street (now Solomon's Tattoo Parlour) from 2004-2014, winning the Sault Evening News' award as the Best Music Store in the region from 2005-2008. As a guitarist, Steve performed in numerous memorable bands both here and during a run in Colorado in the 1980s (alongside the late Bruce Johnson & Banned's Wayne Lawrence), with his most recent documented band work seeing him replace Nathan Switzer in the classic/hard rock cover quintet Full Throttle (the first version) back in 2013, before moving to Washington state the following year.

I didn't know Steve personally, but from all public accounts, he was a kind person and a very talented guitarist, and I know his work in both performance & instruction affected many colleagues in the E.U.P.! Videos of Steve in concert aren't plentiful, but one of Full Throttle (featuring a lineup not publically documented elsewhere) can be seen on his personal Facebook page courtesy of former singer Jamie Roush, where they covered Lynyrd Skynyrd's "Gimme Three Steps" at the former Golanka's Bar (a.k.a. The Bird.) The video quality is mixed, but it's a nice sample of his talents, so seek it out if you can, and stay tuned for more on his services. R.I.P. Steve!
Posted by The Sault Metal Scene at 1:28 PM