The fall months are upon us, so for our first post of September 2017, we're tackling a big concert preview for tomorrow to round our our Labour Day weekend previews, but also, there's some assorted recent updates, some new concert videos, and a big lineup change to take note of as well. Now, here's what you should know!

TOMORROW NIGHT will see one of the most influential metal bands to ever play in Sault Ste. Marie, as legendary British metal quintet Diamond Head will make their first ever local appearance with a headlining set at The Rockstar Bar! One of the linchpins of the New Wave of British Heavy Metal, Diamond Head will be ultra familiar to many metalheads for their influence on newer acts like Metallica (who have covered a number of their songs), so it'll be a thrill to see them on a local stage tomorrow! Only two local opening bands are slated to play tomorrow night, including local punk/metal quintet Jack Spades in their first date since last month's Ontario tour run, while classic metal quartet Project 421 will play an exceedingly fitting set to kick things off! I wouldn't expect to see them cover "Am I Evil?" tomorrow with Brian Tatler and company likely to play it themselves, but this is a huge platform for 421 as they continue their resurgence, so don't miss them either! Prior indications of a third local band have since been removed from the Facebook event page.

Promoted by Jack Spades frontman J.D. Pearce, advance tickets are likely still available for $22.50 at Case's Music, The Rad Zone, The Algonquin Hotel's front desk, online at this link, and potentially through opening band members, and while a price hike at the door isn't indicated, have extra cash on hand just in case you chance it. This is a 19+ show, and a 9:00 PM start time is advertised. This is a can't miss show for classic metal fans, so if you can help it, get down to The Rockstar Bar tomorrow for what promises to be a great night of NWOBHM action over the Labour Day weekend! For a preview, here's Diamond Head live earlier this year!

Next up, here's a big lineup change, as reunited local extreme metal quartet Winkstinger have added Twistory frontman Josh Amendola as their new singer, replacing Keith Gagnon. Though not yet announced on the band's sporadically updated Facebook page, Josh debuted with Winkstinger at The New American Pub last week, and later confirmed his addition to their lineup on his solo Facebook page on Tuesday. A reason for Keith's departure has not been publically announced, though whether his band status factored into their year+ long hiatus is up for debate. Best of luck to Keith in his recent solo work though, he's a talented musician in multiple roles! Josh's debut with Winkstinger wasn't without it's hang-ups, as last week's concert saw the late drop-out of Saskatchewan grindcore band Dour after miscommunication with promoters, though the local bands played on, and hopefully Dour try to play here again here during a future tour!

No word yet on how Josh sounds with Winkstinger, or if he's bringing back rhythm guitar to their live repertoire, but it'll be interesting to hear Winkstinger material with a harsher death metal vocalist compared to Alan and Keith's higher screaming work. Stay tuned for more on Winkstinger's new lineup when it rolls in, and don't miss their next live appearance at the Oh!No 2017 Music Festival in Leeburn next week! 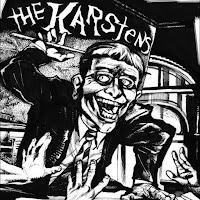 Also today, here's our first known video footage from this year's Rudyard Musicians Festival, courtesy of Sault Michigan alt-metal quartet The Karstens' set two weeks ago! Posted to their YouTube channel on Sunday, three videos were uploaded of the online page-less band's set at Rudyard Township Park, including a cover of The Stooges' "Down on the Street" and, as embedded below,  The Deli Creeps' "Binge & Grab". The Karstens deliver some solid performances in these videos, tackling bands you don't often hear in this area, and while dark, I like how the lighting adds to the mood of the songs! Note that the Stooges cover isn't filmed from a stationary angle, so while that video gets a closer look at the band, it's also a shakier view at the same time. The other video from the show is a 30 second clip of their rendition of The Animals' "We Gotta Get Out Of This Place", uploaded to show vocal disparity between monitor and P.A. vocals that night, and it has a good chaotic sound from what we hear. Give these new Karstens videos a look above & below!


That's all for today, but stay tuned for this month's "Where Are The New Albums?" post tomorrow! Thanks everyone!
Posted by The Sault Metal Scene at 1:31 AM