(Updated on October 17th) Before we get too deep into this post, just a late notice heads-up on a band switch for concerts this weekend, as Traverse City, Michigan metal trio Scarkazm will replace sister band Peril TONIGHT & TOMORROW NIGHT for their shows at The Kewadin Shores Casino in St. Ignace. "Unforeseen circumstances" regarding Peril drummer Brooks Elliott were cited for the switch, as per Scarkazm's Facebook page, though seeing as both bands share a 2/3rds identical lineup, Scarkazm can slide in very easily. Don't miss Scarkazm's metal and hard rock covers TONIGHT & TOMORROW in St. Ignace, and hopefully all is well with Brooks!

Now, today's post is otherwise devoted to the ninth installment of Sault Michigan-area independent label Werehold Records' Friday the 13th music posting event, but unfortunately, this will also be the last installment. After 5½ years of delivering new label music on each Friday the 13th (save for November 2015), this is indeed "the final Friday", with Werehold owner Jason Mills confirming that in a personal conversation last month, noting that the events didn't take off like he thought they would. I find the news disappointing, as this was always a welcome and positive blast of metal on the supposedly unlucky day, but if it has to end, what better time than in October for the Halloween season? In fact, they're going out with a bang, as a record-tying nine new songs were posted today for the occasion! One song comes from Brimley artist Leonard LeBlanc's electronic solo project Palaver, entitled "You'll See Her Eyes, If You're Hungry", in his first Friday the 13th song since March 2015. 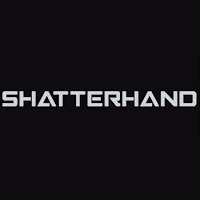 While not overly heavy, this song has a nice rhythm and 1980s-retro feel, so give it a listen if you're a fan of electronic instrumental music! On the metal side of things, four of this year's initial songs are actually from a debuting group named Shatterhand, so what is there to say about them? This is a new project from the aforementioned Jason Mills on guitar alongside Manton, Michigan-based singer/guitarist Timothy Simon Birdsall and Lansing-based multi-instrumentalist Mitchell Wells, who mans a solo project there under the name Mitch Michelle (or Barph Blahgo). As the band's only 1/3rd local, and don't have an online page yet, they won't be immediate additions to our band links, but it's great to see some new blood on the Werehold roster! Both the band and today's songs are all named after old NES video games, including songs named "Abadox", "Phantom Fighter", "Vice Project Doom", and "Nightshade", so how did they sound?

While these songs don't yet have vocals (which won't be a shock compared to usual Friday the 13th output), Shatterhand have promise, and I like the hybrid of groove metal with more of a progressive and electronic element, which has to be influenced by Mitch's own solo career, which is quite eclectic and varied. Unfortunately, all of the Shatterhand songs were quietly deleted for unannounced reasons a few days later, (very unusual for the label to do that) but hopefully they resurface, as I liked where Shatterhand were going! 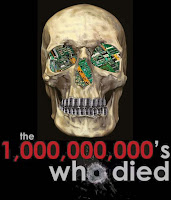 Also, reports of the demise of Jason's solo project The 1,000,000,000's Who Died are premature, as they also returned for the final Friday the 13th event! We originally removed them from our band links in June when it was discovered that their Facebook page was taken down, but the page was quietly restored in recent months, so the page must have been automatically deactivated in a Destroiletesque fashion. Yes, The 1,000,000,000's Who Died are back in our active Sault Michigan band links! Last heard on the May 2016 installment, the Soo/Isle Royale project is featured with new songs named "Conquer the Rest" &, as embedded below, "Glass Coffin", which are both short, though this is par for the course with this act. An included bass solo adds some zest to the song, which both harbouring a technical aggressive attack and programmed blast beat drums for good measure, so give The Billions Who Died's new songs a listen as well!

Finally, I thought it was appropriate to come full circle with Werehold Records' Friday the 13th saga, by ending with the very first band we started our coverage of this event with, namely local metal project Life's Eclipse! They're featured in two songs from today's upload spree, including, "Houses" from the "The Dark Kingdom" album, and as embedded below, "A.C.L.D." from "Deeper In The Woods". The former again features Mitch as a guest musician, albeit here on a mellotron keyboard, and the song is a massive departure for Life's Eclipse, taking on a quiet, reserved sound that is honestly more reminiscent of medieval folk, but it's nice to see Jason and company spread their wings! As for "A.C.L.D.", that delivers more brutal instrumental metal action that existing fans will take to, and hopefully some of these albums will see a paid release at some point! Give Life's Eclipse's newest songs a listen above & below!

That's all for the Friday the 13th new music events from Werehold Records, which were fun while they lasted, but hopefully everyone stays musically active and keeps new material rolling when available on YouTube or other platforms! For what it's worth, the next Friday the 13th is in April, but unless there's a reversal of plans, don't expect anything special in six months, though stay tuned for more news here as it rolls in! Thanks everyone!
Posted by The Sault Metal Scene at 6:37 PM