After a quiet weekend with personal matters, we are back with a big news post on this Monday evening, so what's below to check out? The results of last month's poll, a mid-week concert preview, and leading off, here's a huge LOCAL CONCERT ALERT for later this fall! 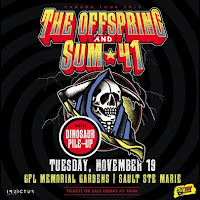 California punk legends The Offspring and Ajax, Ontario punk quintet Sum 41 will join forces for a huge concert at GFL Memorial Gardens on Tuesday, November 19th! This will be the first ever local date for The Offspring, who will be very familiar to punk fans and rock radio loyalists from hit songs like "Self Esteem", "Gone Away", "Pretty Fly (For A White Guy)", and many others, and with a new album on the way, it'll be awesome to have Dexter and company at the Gardens this fall with plenty of classic songs to go around! As for Sum 41, it has been 15 years since we last saw them on a local stage, following their Roberta Bondar Pavilion headlining concert in September 2004, and with familiar songs like "Fat Lip", "Still Waiting", and "Screaming Bloody Murder", their return to the Soo should be welcomed by punk and metal fans alike this fall! Note that this will be their first local stop with Gob's Tom Thacker on rhythm guitar (though we've seen Gob here twice since), as well as with Frank Zummo on drums in place of Steve Jocz.

English alternative rock trio Dinosaur Pile-Up will open in their own Soo debut, and while not really a punk band, their aggressive grunge-tinged sound should set the tone well in November! An Invictus Entertainment Group production brought to you by Rock 101, this ALL AGES concert has tickets running for $98 for most seats, aside from upper back bowl seating which runs for $76, with VIP packages to be announced, and they go on sale THIS FRIDAY at 10:00 AM. The ticket prices are a little steep, but I sincerely hope this stacked show does well, so visit the official Facebook event page and this press release for more details!

Next up, here's our preview of another special Tuesday night concert, as Edmonton art punk quartet Doreen will make their local concert debut TOMORROW NIGHT when they rock Dryer Fire's temporary location on Bruce Street! An ecletic and diverse extension of the punk rock sound, Doreen's indie/garage-influenced sound should fit in just fine at this venue, so don't miss this exciting group tomorrow to see what they bring to the table! Local experimental musician Chase Wigmore will bring his unplugged alt-folk attack to Dryer Fire as the opening act, and fans will surely know that his intense, unique, folk/punk originals will be a sight to behold tomorrow, so don't be late for this one either! As usual for Dryer Fire, this is an ALL AGES concert at 7:00 PM, and there will be a $10 cover charge. The weekday scheduling is unfortunate, but the music speaks for itself, so visit the official Facebook event page for more details, and in lieu of a live video of Doreen (I shockingly can't find one), here's the title track of their new album!

Finally for today, here's the final results from our poll that launched on the site on July 18th, where we posed this question to you guys: What was your favourite local metal, hard rock, or punk concert in the first half of 2019? Only 12 votes were cast, which isn't a great number, but at least they were spread out among a bunch of notable shows that were included, and no one voted "Other"! Here are the final results!

What do you guys think? Well, in terms of the shows with no votes, I am most surprised that White Cowbell Oklahoma, Dave Evans, K-Man & The 45s, and Monster Truck didn't get any attention, as all had high profile touring headliners with either proven local success or high existing clout elsewhere, but alas, it is all in who votes! By contrast, Anvil and The Tea Party both had local supporters in the past month among out voters, as if Parabol & The Elements' tribute show double-header in March, which is very encouraging! The Joni Radford memorial concert made the top 3, which is wonderful to see after so many of her friends and colleagues came together for this two-floor bash in March, but I am a little surprised it didn't get a few more votes. Dopethrone's well received doom metal concert in May placed second, as no doubt helped by AlgomA & Shit Liver's long awaited returns, but the mildly surprising winner was The Killer Dwarfs' headlining show at Soo Blaster!

A huge hit for hair metal diehards of all stripes, hopefully we're not waiting 20 years for The Dwarfs to come back to our area! Thanks to everyone for voting, and look for the six shows with votes (plus "Other") to return for our all-of-2019 poll on your favourite concerts early next year! That's all for today, but stay tuned for more news on the site tomorrow! Thanks everyone!
Posted by The Sault Metal Scene at 8:58 PM