Lots Of Assorted News And Notes!!

Let's kick off August in a positive way with a bunch of assorted news and notes from the last little while, including new members of a new local band, a local musician's entry in a major contest, a newly revamped Facebook group for area musicians, and some Woods of Ypres related updates, so without any further adieu, let's get this post going!

New Sault Michigan metal band NoXcape (formerly MK-Ultra) have officially announced the additions of Krosswalk guitarist Joey Beairl and former Absolute drummer Justin Lawless to the band, rounding out their full five-piece lineup. The news was quietly broken on their Facebook page yesterday. Joey's a well known guitarist from his work in bands like Krosswalk, Shift, Wild Fate, and Kickback (plus the Guitar Studio rock camp), and it's great to see him back in a local hard rock band! Justin rejoins his former Absolute bandmates Ben Huyck and Bill Spence in NoXcape, as I had been speculating since they hinted on old MK-Ultra pages that their new drummer was named Justin. Nice to see them back together, they had very nice chemistry in Absolute! However, NoXcape are definitely a different animal than Absolute, with an arsenal of original material with a nu metal influence already raring to go for their debut show at Dan's Place in Rudyard this coming weekend! Should be interesting to see how NoXcape sound this weekend, and we'll have much more from them as we hear updates, so stay tuned for more!

Next up, have you been noticing a lot of posts, statuses, and replies on your Facebook walls relating to a Facebook group called "Musicians Wanted (Sault Ste. Marie, ON)"? This has actually been around since March 2009 when (I believe) Half Past guitarist Alain Fletcher started it, but just in the past day, former Wishbone guitarist Jeremy Salatuk has been spearheading a revival of the group, complete with an upgrade to the new Facebook group format & mass invites to new members, and it's sure gaining steam! The group's aim, as it was in 2009, is to help musicians either looking for bands or new band members to connect and help make connections to that end. Since the relaunch, I'm seeing a lot of good activity from local musicians of all genres looking to get back in the swing of the local scene (including some hard rock and metal artists), and if you're in a similar boat, you should definitely join and see what you can do! Musicians in town who want to gig and play live should have those opportunities, and hopefully this group's second wind will help that become a reality! Join (or request to join) at the above links!

(Also, the group gave me a bit of news relating to Caveman Morrison, as frontman Tym Morrison confirmed in a post there that the band are basically on hold until the winter due to Tym's lengthy solo acoustic schedule. I expected we'd see them sparingly or not at all until later this year due to all the Saturday bookings, but it's nice to see some public word on that! However, if you're craving electric gigs with Tym Morrison, go see the Hollow reunion this weekend!)

Now, here's a cool note on a local artist's entry in a new music contest! We just mentioned Half Past guitarist Alain Fletcher above, but he has a neat recent update to share, as he's entered a contest to be featured on a Staind song! In cooperation with Indaba Music, Staind are looking for guitarists to send in their own guitar solos for the solo section on the multi-platinum Massachussets hard rock band's new song "Not Again" from their upcoming self-titled album! One lucky (and talented) winner will have their solo featured on the iTunes deluxe version of their new album, and will also win a Mike Mushok signature guitar, a $1,000 Guitar Center gift card, an autographed copy of the new Staind album, and a one month Tab-Pro subscription to Ultimate-Guitar.com! 10 runners up from the 20 most viewed submissions will win an autographed CD as well. Alain's entered under the handle "Dude705" to try and win the contest, and you can hear his solo at this locaton! Sounds good, it fits with the song's pacing, and it'd be awesome to see him win! Now, the winner is picked by judges, not fan votes, but give his submission lots of listens so he can make the top 20! Unfortunately, we can't see a ranking of the top solos, so give him lots of views, cause you never know! Check his solo out (or register yourself?!) at the above links, and his solo starts about 25 seconds into the clip. Best of luck, Al! 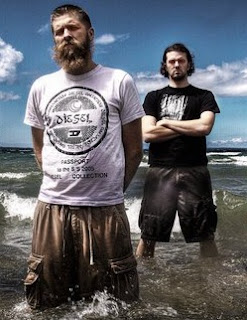 And finally for today, here's the latest from local doom metal band Woods of Ypres! Firstly, the band has finally publically ackowledged the Madden brothers' departure, with both having been quietly removed from their Facebook page's lineup. No public statement has been made concerning their exit, but knowing from past trends, I didn't expect one, and we likely won't hear more until the band announces their replacements. Positive news now, as George Washburn from the website Rock Music Critic posted a review of "Woods IV: The Green Album" onto said website this past Wednesday! He calls it "epic in scope" with lush and thick music, but compares listening to the whole album with eating too much candy: It's very good, but it can be too much after a while. Very positive review though, click here to check it out! And finally, frontman David Gold has posted an interesting sample of a remix of the band's "Woods 4.5" song "You Were The Light" onto his YouTube channel, as done by guitarist Joel Violette! It's just a 79 second clip, but it shows a spacier techno vibe than on the original, and it's an interesting listen! David's also open to fan remixes, so if you're at all interested in making your own remix of the song, e-mail davidypres@gmail.com for the master files. This could be cool if it picks up steam, but check out the sample of Joel's "You Were The Light" remix below! Hopefully the full copy leaks soon!

That's all for now, but if I don't have a new news post later tonight, our next post will be this month's "Where Are The New Albums?" feature post, so definitely look for that tomorrow! Thanks everyone!
Posted by The Sault Metal Scene at 3:24 AM