Well, this is sure turning out to be one of the more depressingly memorable days in recent history for the scene, isn't it? It's still very disheartening to know that David Gold from Woods of Ypres has died, and we're gonna feel this one for a while yet, but I thought I should boost some morale with some happier news for this post tonight, which half relates to David, with some general positive news from the scene at the end. That said, definitely check out my tribute/memorial post to David below this one for early details on the accident, a brief retrospective, and my own thoughts. 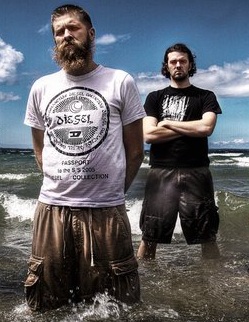 Now, let's get this post started with some very cool news for you Woods of Ypres fans, as the band's label Earache Records has released Woods of Ypres' final recorded album "Woods V: Grey Skies & Electric Light" online for free in David's honour! This is 100% legit, as reported earlier today by the popular metal news site Metal Injection, and if you want to download "Woods V" for free, just click here, select "Download Files to My Computer", and go from there! The download includes 11 songs (8 of which we haven't heard before today) and it also includes lyrics for each song, though no album artwork is included, oddly enough. Still, this is a complete class act of Earache to release this material early for fans & friends of David and the band, and hopefully "Woods V" spreads like wildfire across the metal community! That said, I have no idea what the future holds in terms of formally releasing "Woods V" through Earache, as in delays or changes to the material, but knowing that Woods of Ypres as a band have likely died with David, I'm not entirely sure what's next. For now though, definitely enjoy "Woods V" by downloading it at the above links!

What do I think? It's way too soon to accurately say, I'm just glad to have this material available at this time. It's definitely dark with a lot of morose and depressing moments, but there's some hard hitting doom tracks as well. I can't accurately assess anything yet, and I still plan to formally review "W5" next year. If you don't want to download the album or are having trouble doing so, YouTube user malaise666 has uploaded all but the opening two tracks (which are already on YouTube anyway) onto their YouTube channel, so click here to stream the rest of "Woods V" there, and here's a haunting new song named "Alternate Ending" to check out. The lyrics definitely have more of an impact knowing what happened yesterday, I'll say that much.

Also in David Gold news, some more news sources in the Barrie area are covering the accident that appeared to take David's life. CTV News Barrie's Facebook page reported yesterday that a 31 year old man was killed on Highway 400 on Wednesday (a day earlier than we had thought) after being struck by oncoming traffic, and a later article by The Barrie Examiner has confirmed that David was indeed killed in said incident. According to The Barrie Examiner's article, which is very complementary of David & his musical past, the cause of the accident is currently under investigation. The Sault Star reprinted the Barrie Examiner article on their website earlier today as well. I'll absolutely keep tabs on this as more word comes out, cause I'm sure many of you want some more answers, but for now, click the above links for updates. 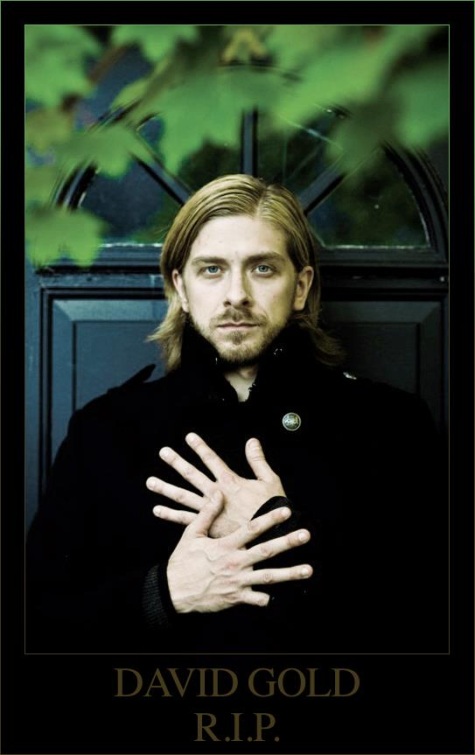 In happier, yet still sad news, David's sister Marie has confirmed details about a memorial gathering in his honour which will take place Wednesday, as she previously hinted towards on his personal Facebook page. It will take place at The Canadian Motor Hotel (upstairs, presumably) at 410 Pim Street on Wednesday from 1:00 PM-6:00 PM, though it will likely go later than that. It'll be a casual get-together for friends, family, and fans, and Woods of Ypres t-shirts and merchandise are encouraged to wear to the event. Pizza, wings, and beer will be on hand for attendees who wanna remember David. For more details, contact Marie at (705) 975-2700. Formal details about his final arrangements have not been publically released beyond this get-together, nor has an obituary been posted online to my knowledge that could have details to that effect. It's nice to see David's family organizing a get-together for everyone to come and remember him by, and hopefully there's more happiness and joy in remembering the great times and music he gave us among the attendees. Myself, I want to at least make an appearance, but we're only getting back from Detroit that day, so it depends on timing, I suppose. Fingers crossed, but regardless, this will be something that anyone who knew David won't want to miss, so stay tuned for updates on that and other arrangements. R.I.P. David!!
-----------------------------------------------------------------------------------

Now, I know that David is obviously the biggest story of the day, but there's other news to report, and I want to lighten the mood a touch, so here's a couple extra stories from the local scene. Firstly, Brimley hard rockers Half A Man have announced the addition of Infathom singer Dillion Semasky to the band, officially making them a quintet (maybe a quartet if Denny Breslin did leave? I don't know for sure.) The news was broken on the band's Facebook page yesterday, though it's unknown how this could impact the album that Half A Man was working on for much of this summer. Dillion is best known as the singer in the Ishpeming metal band Infathom, who you may remember from LemmaFest this past June. Though not locally based, Dillion does live in the area, and it'll defintiely be interesting to hear how he adds to Half A Man! His singing style strikes me as more aggressive and extreme than much of Half A Man's material, which always had a Black Label Society vibe in my opinion, but we'll be sure to see some awesome material and progress from this new look Half A Man lineup in the coming weeks! Check the above links for more details! 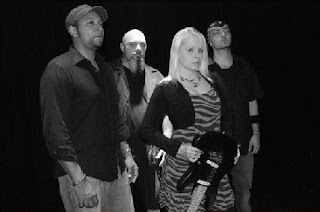 And finally, here's our latest Christmas surprise, and like yesterday, it's another full demo from a local band, this time from defunct Sault Michigan hard rockers Elipzis! Featuring alumni of End of Existence, Riot! By Night, Kilacel, and One Past Mars in their lineups, this talented quartet made a quick splash in the local music scene during their brief one year run, playing numerous high profile concerts all over Michigan, including a number of stops in the Sault area. Elipzis disbanded this summer after 3/4ths of the band formed a new Muskegon-based hard rock quintet named RedStone Riot, but fans are sure to remember their local work fondly. Last year, many of Elipzis' concerts featured a demo CD on sale for interested fans, and though it was just a burned CD with no real packaging, it featured 6 nicely recorded original songs from their original lineup, and I was able to buy one when I saw Elipzis at the WRIF Jingle Ball in Warren, Michigan last December. The featured songs are "Six Shots", "Freedom", "Take Me On", "Missin' You", "Forensic Truth", and "Father", and in honour of the holiday season, I've posted each one onto our YouTube channel for you guys to check out, so click the above links to hear each song!

NO COPYRIGHT INFRINGEMENT IS INTENDED!!! All credit for these songs goes to the former members of Elipzis, I'm just trying to share this out of print material with the world like it deserves! Also note that all of these songs except "Missin' You" & "Father" are posted on their MySpace page as well, so you can here them there also. This material is really catchy with some great melodic singing from Rachel Kiger and some nice hard rock grooves, and even if this material doesn't find it's way into RedStone Riot setlists, it's worth preserving and enjoying, so check out the opening song on Elipzis' demo below, and much more at the above links!

That's all for now, but stay tuned for continued coverage of the passing of David Gold & the future of Woods of Ypres over the next while, along with weekend concert previews, our Saultites In Out Of Town Bands Profile on Repetitions, and more news as we roll closer and closer to Christmas and the end of 2011. Thanks everyone!
Posted by The Sault Metal Scene at 8:04 PM

The original post with the free album release seems to be the woods of ypres ultimate metal forum.
http://www.ultimatemetal.com/forum/woods-ypres/741944-good-bye-my-friend-2.html
It doesn't really seem all that legit, to be honest. I hope there's nothing a miss... RIP David Gold.