Hey guys, I wanted to apologize for the lack of posts and updates this week. We seem to have hit a very quiet stretch for local metal/hard rock news, and while I've had some stuff to post, it wasn't enough to fill out a full post like usual. I did want to note before we get too deep into what I did compile today that two seemingly obvious topics won't have the updates you'd expect. One is for the Buckcherry/Fuel concert at the Sault Michigan Kewadin Casino on Monday, as I've heard extremely little fallout from it. No local news coverage, no visible YouTube videos, nothing. You'd think there'd be some coverable items from it by now, but hopefully something will pop up! Also, if you were hoping for a Roosevelt Hotel metal night tonight, I don't believe there's one, even though this is next on the recent bi-weekly schedule. No Thursday nighters at The Rosie have taken place since July 5th (J.D. Pearce-booked gigs aside) or since recent promoter Stephane Vincent moved to Toronto as expected last month (best of luck to him!), so I'm unsure what's going on. Is the series on hiatus or dead? Is Mitch Sirie bringing it back at some point? I have no idea, but if I hear anything, I'll let you guys know!

That all said, we do have some stories today, including updates to one of our monthly feature series, new videos from a new local band, and leading things off, this notable LOCAL CONCERT ALERT for this fall, so here's what you need to know!

As first announced on Monday morning on Rock 101, the next Allstar Promotions concert at The Dreammaker's Theater at the Kewadin Casino in Sault Michigan will go down on November 12th, and it does feature a couple hard rock bands! The headliners will be British Columbia post-grunge/alt-rock quartet Theory of a Deadman, who are bound to be well known for hits like "Bad Girlfriend", "Lowlife", and "Nothing Could Come Between Us", so they'll attract a sizeable crowd on their own in November! Though Theory of a Deadman aren't really heavy, the opening bands are definitely hard rock leaning, and they include Las Vegas hard rock quintet Adelitas Way, who are well known for mainstream rock hits like "Sick", "The Collapse", and the WWE Superstars theme "Invincible", and they have some nice energetic modern hard rock that should entertain the local audience! The concert will be opened by Baltimore hard rock quintet The Charm City Devils, who are slowly making a name on the national rock charts with songs like "Let's Rock & Roll" and their version of "A Man of Constant Sorrow", and they remind me of Shinedown at points, so I expect they'll make a solid first impression on November 12th! In fact, all three of these bands have never played locally before, which is notable in itself!

Tickets are just $28.50 for this ALL AGES show (which is a fairly good deal for this package of bands) and a 7:00 PM start time has been advertised. Seats are still available from the second row and back, so if you're interested, click here, hit the Kewadin box office in person, or call 1-800-KEWADIN! This should be an entertaining enough concert, and there's plenty of solid newer rock bands to entertain everyone in attendance! I find Theory of a Deadman to be too much of a "Nickelback-lite" group myself, but the other bands have some good material, and this show should find a good audience! Pick up your tickets A.S.A.P., and stay tuned for updates if they roll in! 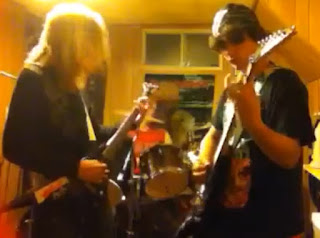 We'll close this post with new videos, both relating to newly discovered local bands! In the last few days, I was alerted to this first band via YouTube postings, and they're a brand new thrash metal band from Sault Ontario named Pillory. Their lineup currently features guitarists Andres Duchesne (ex-Bear Hunters/Social Suicide) and Robert Sartini (more on him in a second) and drummer Bret Shuttleworth, and though they don't have an online page yet that I know of, they appear to be somewhat newer (but I've heard from Bret often that he's been starting or joining bands for a while now.) Robert uploaded videos of Pillory playing three original songs ("Shattered By War", "Fatal Woods", and "Onward To Death") to his YouTube channel last month, and I have to say, Pillory do show promise in these videos! We don't get a lot of straight thrash bands locally (mostly thrash/death hybrids if anything), and they have the thrash trademarks down with some fast heavy riffs and melodies, and if Pillory takes off and gets a bassist and singer, they could be a young band to watch! I've embedded the longest of these Pillory jam session videos below ("Shattered By War"), but definitely check the rest out at the above links!

And speaking of bands with Robert Sartini, this isn't the first band project he's tried to start locally. Though relatively a new sight on our coverage, he briefly led a band named Roadkill last summer alongside drummer Jarrod Sachro, and four jam session videos from their run were also uploaded to his YouTube channel! The videos include a self titled original, songs named "Speed Therapy" and "2083... E.D.I.", and a cover of Diamond Head's "Am I Evil?", so click each link to check them out! I don't know if Roadkill evolved into Pillory or were a separate band entirely, but these songs do show some thrash metal promise, though they are rougher & less complete, and the chemistry isn't as obvious. Interesting stuff though, so check out Roadkill's self titled song below, check the above links for more, and stay tuned for more from Robert's channel!

That's all for today, but stay tuned for weekend concert previews (maybe?) and more soon! Thanks everyone!

Posted by The Sault Metal Scene at 3:40 PM