One more post before I head off to Oddzfest 2013 Metal Mash-Up (though I may have an auto-post of some kind tonight), so what lies ahead for right now? Today, we have a preview of the next major headlining metal show at the Soo Kewadin, some new videos to share on here from across the river, and some recent concert venue changes (including one in Sault Ontario), so read on below for what you need to know! 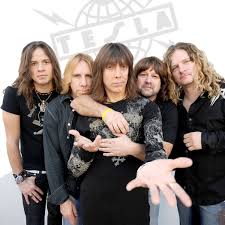 TOMORROW NIGHT, Sacramento hair/classic metal legends Tesla will return to The Dreammaker's Theater at the Sault Michigan Kewadin Casino for their fourth local concert appearance! The band best known for hits like "Love Song", "What You Give", and their cover of "Signs" were last seen here over three years ago when they rocked the Soo Kewadin in June 2010, and it will be great to see them back (with the exact same lineup, no less) to charge the local stage once again with their up-tempo classic metal and hard rock sound which helped them sell over 5 million albums! Like their 2010 date, Tesla's opening band tomorrow will be Detroit hard rock quintet Fifth Way (featuring Rudyard native & LSSU graduate Zak Stelmaszek on guitar), in both their first local appearance in 10 months and their first local date since their revolving door of bassists saw Victor Wooten replaced by Anthony Palsgrove. Hopefully their hard hitting modern rock sounds serve them well in their local return, and it's definitely familiar ground for them!

As of this writing, a handful of tickets are still available in the ninth row & back for $35 each, so if you don't have yours yet, get them A.S.A.P. at this link, 1-800-KEWADIN, or at the box office in person! This is an ALL AGES show, and while a 7:00 PM start time is advertised, online posts indicated that Fifth Way would be playing at 6:30 PM. For more details, visit the above links and this commercial! Tesla still have it, and this show should prove to be another success for their Saultite fans, so don't miss this show, stay tuned for fallout, and for a preview, here's Tesla covering a ZZ Top classic in the Soo in 2007!

Next up, there's a couple more Shinedown concert videos to share from Sunday night's local concert! These come from YouTube user Dan Reck (a.k.a. Reckage35), and though he didn't post a video of "Bully" like most others, he filmed the Jacksonville hard rockers' cover of Lynyrd Skynyrd's "Simple Man" (complete with pre-song cover teases) and, as embedded below, their original "I'll Follow You"! Another video on a slanted angle from our right of the stage (did no one film anything on the left side?), Dan got some solid audio from these two softer tracks, but there's no zooming, and part of the stage is blocked from what I assume is a speaker. Nice quality otherwise, so check out Shinedown playing "I'll Follow You" at Kewadin Casino below, and stay tuned in case more Shinedown videos turn up!

Also in new Sault Michigan video discoveries, I recently came across a video from local metal band Tantrym Tyme that we've never shared on here! Dating back to when they were still known as Abstract, this was uploaded by YouTube user METALLICA2MEGADETH on December 22nd, 2011, though it's definitely older than that. The lineup, clothes, and location match up with earlier videos of the guys playing a September 2011 gig in Mackinac Crossings on Mackinac Island, in what was one of their last concerts with guitarist/bassist Kyle Burton before his departure that month. The video features Abstract covering Velvet Revolver's "Slither", and like many 2010-2011 videos that I've seen, their skills are impressive for their younger ages, but they've definitely improved in all areas since. Jacob Hotlen's vocals in particular seemed wonky on the choruses, but his solo's pretty good, and it's a nice glimpse at Abstract's early run! Check out their "Slither" cover below, and don't miss Tantrym Tyme this weekend outside of Harmony Health Foods for Downtown Days!

Finally for today, two popular local concert venues have apparently undergone some recent changes, so we might as well mention them! One is The Rapids Lounge at the aforementioned Sault Michigan Kewadin Casino, as their Facebook page last night announced that the local bar/concert spot held it's "grand re-opening" on Wednesday, complete with this ribbon cutting photo. Reportedly, the changes include a newly renovated sports lounge, more TVs, added seating, a new sound system, and Michigan sports memorabilia, though possible changes to the concert area weren't mentioned. Hopefully everything is indeed better at The Rapids Lounge, and go see some live bands there soon! The other renovations are (surprisingly) for The Canadian Nightclub in Sault Ontario, as they're soon ready to unveil what DJ Jay Perron is calling a "rebirth" of the Pim Street bar/venue on August 1st, coinciding with their usual Thursday night dance parties. Jay hyped "fresh new surprises & a fresh new vibe" on The Canadian's Facebook group yesterday, but didn't elaborate further there.

By my count, this is the third time in 4 years The Canadian Nightclub has had renovations (following earlier renovations in 2009 and in the aftermath of July 2011's flooding), and it remains to be seen how different The Canadian will look and feel come the Airbourne concert on August 19th. Hopefully these last for the long haul, and I hope the "rebirth" in question is a success for all involved! And yes, I assume this is partly why we didn't hear much on July concerts there. Stay tuned for updates as they roll in!

That's all for now, but I will see you guys at Oddzfest 2013 Metal Mash-Up TONIGHT! West of Hell's return, Bring The Fallen's farewell, 6 more bands, and FREE ADMISSION if you wear a local band t-shirt, so DON'T MISS THIS SHOW! Oddfellows Hall, 6:00 PM! Thanks everyone!
Posted by The Sault Metal Scene at 2:15 AM