Hey guys, here's a new news post just as I promised this morning! This one is actually pretty stacked, more than I assumed initially, so you'll get a good filling of local metal stories with this post! Today, we have news on an upcoming book that should interest many of you, a concert cancellation, and a band addition for a concert TOMORROW, but first, here's three LOCAL CONCERT ALERTS!! All involve headlining bands whose names start with the letter W, but unlike usual, we won't start in chronological order, as one of these shows is quite major! Here's what you need to know! 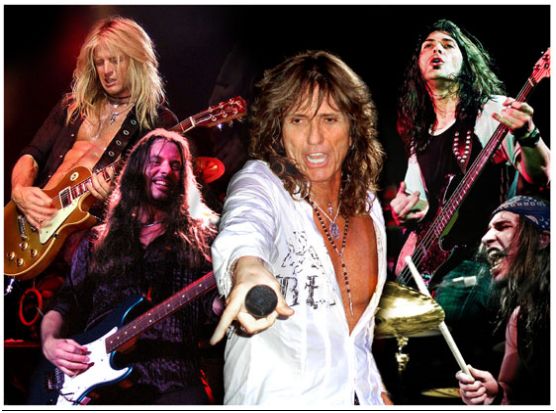 British hard rock legends Whitesnake are coming to Kewadin Casino this summer! Yes, the David Coverdale-led quintet best known for hits like "Here I Go Again", "Is This Love", and "Fool For Your Loving" will make their way to The Dreammakers Theater on August 26th on their upcoming American tour in support of their upcoming new album "Forevermore"! I think this is their first ever show in the twin Saults, but don't quote me, I could have missed one. This is the second classic metal show at Kewadin Casino this year, following Cinderella next month, so if you love the old stuff, then the good news keeps coming! No word yet on if there will be opening bands, but I wouldn't be surprised if there was at least one. It will be a 7:00 PM concert, and I assume it's all ages, but ticket prices have not been revealed yet. They'll go on sale at the Kewadin box office, at 1-800-KEWADIN, and online at this location on March 1st, so mark that date on your calendars! Thanks to The Sault Star's article on this show for the information! This sounds like a very intriguing concert, and there's sure to be plenty of Whitesnake fans locally to help make this show a success! Good way to end the summer too, if I may say so! Stay tuned for updates as I hear them, and remember, tickets go on sale on March 1st!

Now for the remaining new shows, and we'll start with one taking place this month! In what is amusingly being dubbed "The Gayest Show On Earth", two metal bands will hit Foggy Notions one week from Friday (February 25th) for a hard hitting concert! The headliners are extreme metal quintet WinkStinger, in what will be (I think) their first headlining concert of 2011! Good to see, they'll surely tear up the stage at this show! Joining them as the supporting band will be local grimecore trio Shit Liver, whose brand of crusty death/punk will be sure to set a heavy tone for the evening! This concert has a 10:00 PM start time, a 19+ age limit, and no listed cover charge. For more details (and for some amusing posts related to the show), head to the official Facebook event page! Sounds like a fun show, almost like a Rosie metal night show with one less band and at a different venue. It's always good to see a healthy sense of humour as well, and WinkStinger should bring it in spades! Remember to hit this show if you can, and I'll have updates on it if news comes in!

Finally for new shows, how about another local dose of Woods of Ypres? Just two months after their return to our burial ground on March 10th, David Gold and company will return to The Roosevelt Hotel on May 13th on the opening show of their Western Canada tour! The joys of our location, we can be considered part of Eastern and Western Canada without much hassle! Unlike their show next month though, the May 13th show won't be on one of the Rosie metal nights. It'll actually be on a Friday, which is a good concert night regardless! Details on this show haven't came out beyond this, but the show is confirmed via the tour topic on Woods of Ypres' official forum. I imagine it will have a 10:00 PM-ish start time, a 19+ age limit, and no cover charge. I'll of course have details as they leak in, but this is great news for local Woods of Ypres fans! I say this makes up for the lack of a local show last year, wouldn't you? Hopefully I can hit both of these shows, and make sure to make note of them! Cant beat blackened doom metal like this! I have much more on Woods of Ypres to share very soon, so keep an eye out!

Next up, here's a combination of stories revolving around the same local band. If you've been wondering why there hasn't been any updates concerning the all ages show on Saturday featuring Right From The Start, Calling Ocala, and local hardcore bands As It Stands and Changing Waves, here's why. The concert was quietly cancelled at some point in the last few months, as evidenced by the deletion of the event page and any trace of it's existence from the promoters' pages. Why? I don't know, but it's disappointing for fans of pop rock and hardcore! With that said, Changing Waves will still be busy this weekend, as they are the third and final confirmed band for TOMORROW'S metal night at The Roosevelt Hotel! This will be their first ever 19+ show (to my knowledge), and hopefully they'll attract lots of new fans when they open up tomorrow's show at The Rosie! As for the lineup order, The Bear Hunters are headlining and Shit Liver are in the middle. Stay tuned for more on this concert in tomorrow's weekend concert previews! My source for this info is the Rosie metal nights' Facebook page.

Finally for today, here's a cool note on an upcoming book we've mentioned here and there on the SMS! In November 2009, you may remember when Wawa author Duane Roy released "Castle Stories: A Rock N' Roll Scrapbook", which detailed his concert memories and stories from major metal shows at Charlevoix's old Castle Farms outdoor venue, including a healthy amount of local references. Well, it's known that Duane's followup book was going to be a similar collection of concert stories, this time from Sault Memorial Gardens, the old hockey arena/concert venue that The Essar Center replaced in 2006. Almost a year and a half later, we're inching closer to it's release, so I thought I should alert you guys to some of what to expect! It will be called "Soo Stories: A Rock N' Roll Scrapbook", and it should have similar themes and sections compared to "Castle Stories" from the rock concerts held there, be they Duane's stories and memorabilia, or others! I just hope the pictures are higher resolution, that was my major issue with his last book. Apparently, the first chapter will be Duane's story from Ted Nugent's show at the Gardens, but there's bound to be much more than that! Stay tuned for updates on when "Soo Stories" comes out, as this is sure to be a great read! And thanks to Duane's personal Facebook page for some of the above information!

That's all for today, but stay tuned tomorrow for weekend concert previews and our Saultites in Out Of Town Bands Profile on Maximum RNR! Thanks everyone!
Posted by The Sault Metal Scene at 8:22 PM