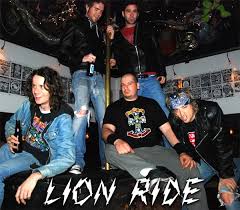 Owner: An original Lion Ride member (I'm guessing guitarist Marky Lion, but I don't know for sure), though the channel is credited to the band as a whole.

Channel Summary: This is the official YouTube channel for defunct Sault Ontario hard rock quintet Lion Ride, and was created in late 2007 during their first year as a band. It features 9 videos created between December 2007 & July 2009, plus two posthumous uploads following their 2012 breakup. Seven of them are live concert performances, mostly taken from a March 2008 show in London, though videos from concerts in Barrie, Moonstone, and (of course) Sault Ste. Marie are posted. The channel also includes a short aside from an early local concert involving Marky Lion's mother, as well as some Toronto rock radio airplay that the band received in May 2009. After almost three years of inactivity, the band resumed sporadic use of their channel last year, including posting their cover of the Pointer Sisters' song "I'm So Excited" in April 2012, and all four songs from their unfinished second album sessions in March 2013.

Why Should You Watch: Because this channel has some solid Lion Ride footage from their earlier lineups that deserve a wider audience, and not to mention their last studio recordings! I do recommend subscribing, especially after the channel returned to use, but I wouldn't hold my breath for anything super substantial beyond old material postings, and even then, they've only uploaded two videos there since 2009. Check it all out though!

Lion Ride - "Lazer Lover" Live @ The Salt Lounge: Of all of the performance videos on the Lion Ride channel, I opted to feature their performance of "Lazer Lover" in London in March 2008 here first because this song was later omitted from the band's later setlists, despite a studio version of it existing online. It's an energetic little song that definitely suits Lion Ride's style, and though the camera quality isn't fantastic (scratchy audio), it's nice to see video of the band playing "Lazer Lover"! Also watch for former bassist Lionel Itchy & drummer The Italian Stallion, who can both be seen on most of the live concert videos on the channel as well!

Lion Ride 'Bang Bang Bye Bye' Live @ Moonstock: The channel's last concert video to date, this comes from a cancer benefit show that Lion Ride played in Moonstone, Ontario (a half hour north of Barrie) on July 4th, 2009. Featuring the band's 2009-2010 lineup (including then-bassist Diamond Brent Panther), the video is of an early performance of Lion Ride's original song "Bang Bang, Bye Bye", which would have been on their unreleased full length debut album. Though the video quality is kinda fuzzy and far, the audio is great, and it's nice to see Lion Ride rocking out for a great cause, especially when they gave us an early taste of a then-new song!

Lion Ride - Fuck Yeah !!: With over 1,300 views, this is the most popular video on Lion Ride's channel, despite clocking in at just 26 seconds long. It documents what became a common occurrence at Lion Ride's local concerts, where Marky Lion's mom Marsha screams "Fuck yeah!" into the microphone! In this case, it's from Lion Ride's December 2007 concert at Foggy Notions (now Coch's Corner.) Always fun, and proof that even your mom can rock like Marky's!