Well guys, I have some big news to share today, as we have two HUGE LOCAL CONCERT ALERTS to let you guys know about, one for each side of the Twin Saults! We'll cap things with some new songs and videos, but let's dive straight into these major new shows, going (as usual) in chronological order!

ard rock legend Joan Jett is making her way to Sault Ste. Marie, Michigan this fall! The female rock pioneer known for hits like "I Love Rock N' Roll", "Bad Reputation", and "I Hate Myself For Loving You" will hit The Dreammakers Theater at Kewadin Casino on October 21st with her band The Blackhearts for a night of her well known hard rock classics! I think this is her first ever trip to the Sault area for a concert, but I may be wrong. No word yet on possible opening bands yet, but the show has an advertised 7:00 PM start time, and should be all ages. Tickets are $44.50 American, and they go on sale THIS MORNING at 8:00 AM! If you want your tickets, head to this location at 8:00 AM or later (go earlier just in case) and follow the links after clicking "Buy Tickets". Tickets should also be available by phone at 1-800-KEWADIN or through the actual box office at the casino itself. Check the above links for more details, along with SooToday's article on the show! It's awesome seeing Joan Jett come here for a show, she's one of the best rock guitarists of all time and she has a lot of hard rocking numbers in her lengthy repetoire, so she'll be a must see act this fall at Kewadin! Stay tuned for updates on this show as they come in! 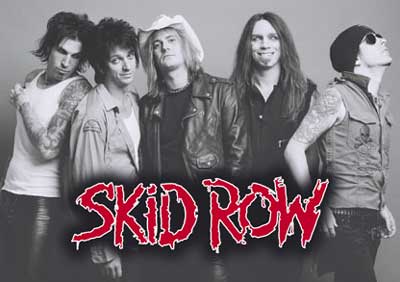 Also for big new shows, this is an early scoop that I can now officially confirm after getting confirmation from promoters last night. New Jersey heavy metal legends Skid Row are coming back to the Sault area themselves, this time in Sault Ontario! Dismembertainment are bringing the multi-platinum selling band behind such classics as "18 & Life", "Youth Gone Wild", and "I Remember You" back to the Twin Saults for the first time in over two and a half years for a concert at The Roosevelt Hotel on November 9th! No strangers to the area, they've played at Kewadin Casino multiple times in the past, most recently in March 2009, but this will be Skid Row's first local concert (to my knowledge) on the Ontario side of the border. It'll also be their first local show with new drummer Rob Hammersmith, who replaced Dave Gara last year. Crank Sound Distribution will be on hand to handle the sound at the show, and tickets (limited to just 200 on sale) will likely be $40, which is worth it considering that you're gonna be seeing Skid Row right here in the Soo! Original lineup or not, their instantly recognizable classics and great reputation will be evident on the local stage, so definitely consider getting tickets when they officially go on sale, as they'll go fast!

Other details, like age limits, ticket availability, opening bands, and so forth are not out yet. Stay tuned to the SMS for more details as I hear them! I'm all for seeing Skid Row on November 9th, and I know that Dismembertainment will pull out all the stops to make this show and ticket sales go smoothly! I will say that, in terms of openers, it'd be cool if Sense of Truth returned from their hiatus to open at this show, seeing as they won the Battle of the Bands in 2008 to open for the aborted Skid Row concert at Runway Park that June. That's just personal speculation, but it would be fitting. When more word comes out on this concert, I'll let you guys know!

Now to some more news from a pair of solo guitarists named Mike in the Sault area, starting with Swayze Train guitarist Mike Libertoski's tech/death metal project Galactic Alignment! Mke has uploaded a song named "Hypernova" onto the band's Reverbnation page which will be deleted on Sunday, so it's a limited time offer! Check it out before it leaves, cause it's an awesome instrumental piece with a lot of extremely fast technical metal action! I hope Mike expands this project, cause Galactic Alignment are extremely promising! Wish I knew more about Swayze Train too, are they basically Electric Motor Fish with electric instruments, or something different? The membership mostly implies metal, but I'm not 100% positive. I'll find out at some point! The other new song is from Sault Ontario solo artist Mike Cliffe, who's uploaded a heavier new original song named "Hanging From The Earth" onto his online pages! Nice heavier riffs but with some nice guitar melodies that add some extra flavour. Not crushing, but the song has some heavy groove and bite to it, and Mike's talent is as visible as ever! Good stuff, check out that (and many more) songs at the above links, and here's "Hanging From The Earth" from his YouTube channel, accompanied by a slideshow which incorporates some of the computer screenshots from his music tracking program used with this song!

And finally, here is this week's classic video! With local punk trio Redundant rocking a couple different stages this weekend, I decided to tie in this week's video with drummer Rick White, who's better known locally as a guitarist, most recently in Frightlight! This video comes from their first ever live concert appearance, at the Coch's Corner Halloween Party on Halloween night in 2009, which was also their only concert with former Fitswitch drummer Larry Mousseau. The video in question is of Frightlight covering The Headstones' song "Cemetery", a track which no longer appears in their live setlists, and though the video wasn't great in quality, it has good audio! Rick handles most of the lead vocals here, and does a nice job too! The band sound pretty good, though the future addition of St. Mayhem would likely add to the guitar parts. Filmed by a concert attendee, Rick would upload the video onto his personal Facebook page the next day, and you can view the original video at http://facebook.com/video/video.php?v=192784251302.

NO COPYRIGHT INFRINGEMENT IS INTENDED! This is one of the few Frightlight videos not on YouTube, and it deserves a wider audience and recognition! With that said, check out Frightlight covering "Cemetery" from Halloween 2009 below!

That's all for now, but stay tuned for more news, our Alcoholic White Trash concert preview, and much more very soon! Thanks everyone!
Posted by The Sault Metal Scene at 3:24 AM