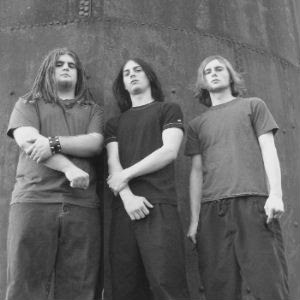 Lineup: (Saultites in RED; members not in their last full lineup in italics)

Local Info: The only former Sault Ste. Marie resident in Paricide (to my knowledge) was bassist Shane Fraser, who's probably best known locally as frontman of the experimental metal band Sue Inside! After moving to Sault Ontario in the mid-2000s, he formed Sue Inside in 2007 with drummer Jeff Vogel, and they left their mark in the local scene with unique two-man metal sets through mid-2009, notably at the Skid Row & YMCA Battles of the Bands. Shane moved to Oil Springs (45 minutes southeast of Sarnia) in the summer of 2009, taking Sue Inside with him, where they continued to sporadically play live and post new material until the spring of 2012. Now residing in Thunder Bay, Shane most recently played bass in the rock band Ostrich (now Eleven Seventeen.) 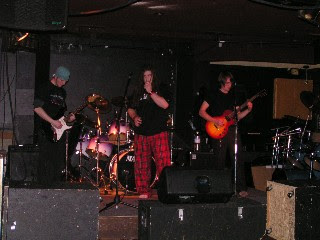 Band Bio: Paricide formed in Petrolia (a half hour east of Sarnia) in or around early 2003. Their original lineup, including singer Rob LaPier, played numerous shows in that area over the next year, including some high school concerts and benefit events. The band also released an EP called "The Druglords of Music" that year, along with another release during their run named "The Bong Chronicles". In January 2004, Paricide relocated to Brantford to further their musical goals, though Rob moved from there that April, reducing the band to a three-piece. Paricide continued to rock Southern Ontario concert venues from there, including shows in Toronto & London, and some opening sets for notable hard rock tribute bands like Mama Kin. Band updates stalled after July 2005, with the band presumably dissolving that summer, though with a lack of online band pages, that can't be proven. Four years after their last update, a posthumous YouTube channel was launched featuring assorted Paricide audio recordings, while you can now see Adam with the Oil Springs band The Mudd Buttons.

Compared to most of the Sue Inside output we heard at their local shows, Paricide were definitely more melodic and full-sounding, so if you're not a fan of screaming and more extreme metal, you might like Paricide more! I was honestly surprised at how many slower softer moments their songs had, and on tracks like "Paraconscious", there's real layers and themes mixed into everything, even if the production's lacking. Rob LaPier's vocals weren't bad and flowed with the music, and the members of Paricide showed some good hard rock skills with some nice original touches! Reminded me a lot of late 1990s hard rock in style, though definitely not venturing into nu-metal territory. Shane's bass work is solid here, and he showed off some nice diversity on the originals I have access to, and the guys did have chemistry! Songs like "The Shadow" are good for aggression, but on tracks like "Bleed" and "The Number Eight", they definitely hold their own with softer material. Alternative hard rock fans should give Paricide a listen, cause they were a talented band that had a lot of unfulfilled promise, so don't skip a chance to check them out!

Online media of Paricide's is mostly limited to their posthumous YouTube channel, as the songs on their website are now dead links. No videos are posted, but tracks from both of their demo releases are featured, along with select live covers from at least one Petrolia concert circa 2003, including covers of Mudvayne, Nirvana, and Nine Inch Nails songs. The live tracks are lesser in quality, but well performed, so give them a listen too, especially "Stoned" by Silverchair! Embedded below though is a promotional video that Adam uploaded to his YouTube channel in 2007 that features rare live footage and some solid original music, so check it our below, and  all of their posted songs at the above links!