Back to some news in this packed news post this morning, so today, we have updates on what music we can expect at a recently re-opened concert venue, Rotaryfest fallout, and some awesome press on the local metal scene on a prominent internet radio station, but leading off today, here's some LOCAL CONCERT ALERTS for shows over the next two weeks!

Local classic hard rock quintet Turner Up are making their return to the live stage THIS FRIDAY, and at a new venue for them! After an almost two month break, the guys (and girl) will rock The Speak Easy on Friday night in what I believe is the first ever concert from either Turner Up incarnation at Algoma University's on-campus pub. It's also the first heavier concert (that's been announced, at least) to go down at The Speak Easy in over 4 months, and I welcome more shows there for sure, especially from this talented local band! Though we didn't get a chance to see them at Rotaryfest, their hard hitting classic covers will be sure to entertain on Friday night at The Speak Easy, so keep this show in mind! Admission should be free, a 10:30 PM start time has been announced, and though I expect this is a 19+ event, some type of all ages availability might be there for existing Algoma students, which isn't unheard of for this venue. For more details, visit the official Facebook event page! It's always good to see Turner Up back on stage, and hopefully they pull in a sizeable crowd on Friday, so consider a trip to The Speak Easy this weekend on your local concert calendars!

Also in new shows is a punk concert with some metal flourishes on August 2nd at The Roosevelt Hotel, to be headlined by Calgary heavy rock n' roll trio The Shotgun Dolls! Likely stemming from inquiries into local bookings earlier this year, this band (who remind me of Lion Ride at times) bring a lot of styles and influences into their catchy punk-inspired hard rock sound, and they'll fit well for a local concert next week on their From The Roots 2012 Canadian Tour! Three local bands have been signed to open things, including one heavier act, that being the returning Sykotyk Rampage, who will bring their "blue Chinese metal crash punk" back to the local stage for the first time in over 3 months next Thursday as well! With 6 albums still awaiting an impending release, this unique quartet will be sure to entertain with some creative improvised originals and drinking songs at this show, so don't miss them! They're sandwiched between two local punk openers, including co-headlining classical punk trio RedD Monkey (fresh off their Canadian tour run) and first up at this event, local punk rockers Redundant, and it's good to see them back at a show like this, as they always entertain! Admission will be free, a 10:00 PM start time has been announced on the Facebook event page, and unless I hear otherwise, this is probably a 19+ event. Check the above links for more details!

Note however that this is not the 48th Rosie metal night (that I can tell), as despite the Thursday timing & the flow with the recent bi-weekly schedule, this is being booked by Frightlight/T. Rex Manning frontman J.D. Pearce, similarly to the Die Mannequin show he booked on a Thursday in May, so I think it's just convenient timing (but if I hear of an official return for Rosie metal nights, I'll let you guys know!) Either way, this sounds like an entertaining concert with some quality punk-tinged bands, and definitely keep it in mind for next Thursday! I hope to be there!

Next up, in case you guys didn't get the Facebook memo last night, the local metal scene got an awesome spotlight on a Toronto internet radio station yesterday! Sault native Andrew Keachie anchored a special Sault Ste. Marie metal scene-based episode of the radio show St. David's Ward on the internet radio station Radio Regent last night at 9:00 PM, and for the full hour, he touched on the local scene (especially concerning bands at the 3 Inches of Blood show at The Rosie earlier this month, which he was in attendance for), and it was a fun listen! The hour long show included interview segments with members of The Bear Hunters & Winkstinger, 3 Inches of Blood bassist Byron Stroud, 3IOB show promoter J.D. Pearce, and myself, alongside playing the 3IOB song "Metal Woman", two live tracks from the local openers of that show, part of Gates of Winter's "Winter Flight", and a rare 1968 track by the old local band (Those) Rogues, who you could say were a proto-metal influence locally. There's some great insights into the benefits the scene has over a larger city, and Andrew definitely seems to appreciate what's grown back home, and it was a great listen! That said, what if you missed the broadcast of St. David's Ward on Radio Regent last night?

Well, you guys may be in luck, as I recorded the vast majority of the show using my audio recording program, and if I get the all clear, I may post it online soon for you guys to check out! That said, my program hit it's maximum recording time during The Bear Hunters' song, so I don't have their interview recorded or the tail end of the episode, but hopefully Andrew or someone out there can hook me up (if I get the end, I'm more likely to share the episode online.) It's an awesome listen, but there's so much left unsaid, and hopefully Andrew does a part 2 down the road! Hope you guys checked it out, but if not, stay tuned, as I may have the full thing ready to share in the near future!

Also today, here's some fallout from Rotaryfest's stages in the local news media! SooToday's Donna Hopper was present at our local summer festival this past weekend, and she posted a recap at this location, which features more high quality photos! These largely consist of activity on and around the Tenaris Second Stage on Queen Street East, and amongst her photos are a few of heavier local participants Garden of Bedlam (who she called "explosive") and Sailor's Tongue, though like many of her other concert photography albums, the photos are not in a discernible order. That said, if you wanna go straight to the photos of the heavier bands, Garden of Bedlam's are numbers 6, 7, 16, 21, 30, 38, and 44, while Sailor's Tongue's are 14, 25, 36, 39, and 42. As well, the fallout on the Local2 side of things is so far very minimal on the music side of things, as all I've seen so far is this article summing up the event, which includes a video of assorted events and elements (including some main stage bands, but the audio is replaced with a backing track.) Last year, they filmed portions of most main stage bands, but did they do the same this year, or is this all we're getting? Either way, at least Local2 did some coverage. If I hear of any more Rotaryfest fallout, you know I'll have it here! 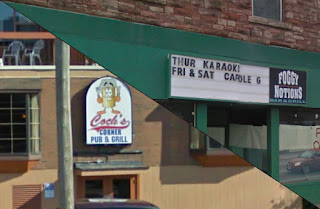 And finally for today, here's a note on the current state of live music at a local concert venue. Well over a month after Coch's Corner re-opened at it's new home at the old Foggy Notions location at 708 Queen Street East, they're slowly getting back into the groove of things as a live concert venue, but compared to the old Coch's/Foggy's incarnations, things sound like they're a bit softer. Employee/local concert promoter J.D. Pearce revealed on one of the bar's Facebook groups on Sunday that Coch's Corner is "fast becoming THE SPOT for live local acoustic performances", including posting a schedule of weekly entertainment & bands to watch out for. I've never heard such an emphasis on unplugged acts at either venue in the past, but I wouldn't be surprised if this is a way to avoid future noise complaint calls, which dogged that location when it was Foggy's & Feedback. That said, I don't know for sure if that's the reason or if something else is at play here (I haven't been there since last year), but if it's now permanently an acoustic-only venue, hopefully they bring in some metal bands for some special unplugged sets! Remember how well Gates of Winter's was at Loplops way back when? Redundant are playing an acoustic set at the new Coch's soon as well, so this could be an interesting change if they attract a wide spectrum of bands!

As updates roll in for any possible heavier bands at Coch's Corner, I'll have them here, but hopefully the over 6 month drought for metal at 708 Queen will end sooner or later, plugged in or not! That's all for now, but stay tuned for our Anvil preview and more in our next news post! Thanks everyone!
Posted by The Sault Metal Scene at 3:02 AM