We're behind on news at the SMS, so let's stack this post with a ton of news! Today, we have LOCAL CONCERT ALERTS for a bunch of shows featuring a prominent local musician this month, a brand new local metal album release, and some more assorted stories, but leading things off is a new addition to our band links, so read on below for the news, and check out this month's "Where Are The New Albums?" post below this one!

We have added a new band to our active Sault Michigan band links, locking us in the 20 band range again, and it's The Hubbard-Menard Band! The new hard rock project from former Splitshot bandmates Dave Menard & Chris Hubbard (ex-Nixxon Dixxon/Trail's End) finally launched their Facebook page on Saturday, which is already updated a lot more than Chris' previous bands' Facebook pages ever were, which is a good sign! These include lots of photos, including the back cover for the proposed Hubbard-Menard Band album, which lists the song titles and credits 415E Studios as where the tracks were recorded. As well, instrumental demos of 6 songs (including the 3 that were previously on Chris' personal Facebook page) have been posted there (most with titles), including the tracks "Better Way", "Gypsy", "Wonderland", "Livin' It Up", "Run Ragid", and an untitled track that they plan to end the album with, so click each link to check them out! Remember, as Facebook video files, I can't embed them here. Plans are to record the remaining 9 songs towards a 15 song album release, and add vocals to each, with plans still in place to release the recordings on CD in the future, so keep posted at the above links!

Will The Hubbard-Menard Band take off successfully? Will this CD come out, and in what forms? How does Dave sound as a singer? How will this material compare to the originals Chris recorded with his old bands? All of these are questions I'll follow for the site, but it's just good to see Dave & Chris back together in this new project, and to see a new Sault Michigan band pop up, as this could be a good shot in the arm for their scene! Stay tuned to the SMS for more on The Hubbard-Menard Band as it comes in, and they're now in our Sault Michigan band links!

Next up, it's time for a bunch of LOCAL CONCERT ALERTS relating to local singer/guitarist Tym Morrison's various projects, as he's booked solid for every weekend this month, including three concert weekends from the metal trio the fronts, Caveman Morrison! After a month+ break from the local stage, Caveman Morrison will return to The Roosevelt Hotel over the next two weekends (This Friday only & July 13th-14th), while they'll hit The Nicolet Tavern for the first time this summer on July 27th & 28th, which sounds like a busy and hard hitting month of shows for this talented local band! Note that I don't know why they're not playing this Saturday, and I also haven't heard who'll be on bass yet, as they parted ways with James White shortly before their shows at The Rosie last month, though if I hear anything on that front, I'll let you guys know! Admission for all of the above shows should be free, you must be 19 to attend any of them, and 10:00 PM start times are likely on all fronts. For more details, click the dates above, which is where I linked the Facebook event pages to save some space. It's great to see Caveman Morrison lining up so many new concerts, and hopefully they get great crowds at each one this month, so don't miss them, including THIS FRIDAY at The Rosie!

Leading from the new Caveman Morrison shows, you may have noticed no bookings over the July 20th-21st weekend from them. Well, Tym Morrison will bring his solo acoustic show back to The Service Grill on Korah Road over both nights with very long nights of his unplugged hard rock and metal covers, as you've come to expect! Like his other recent solo gigs, he'll be playing two sets on Friday the 20th and Saturday the 21st, with each one starting at 3:00 PM and 8:00 PM. I don't believe there's an age limit, given the restaurant setting, and there shouldn't be a cover charge. For more details, visit the official Facebook event page! It's always good to check out a Tym Morrison solo concert, and at one of his favourite stomping grounds no less, so West Enders and Rosie regulars don't have to go too far to see his unplugged metal and hard rock covers on July 20th & 21st! Stay tuned for more updates from Tym & Caveman Morrison as they roll in! 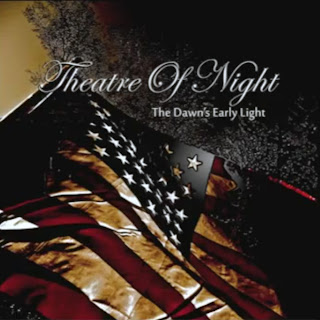 Also in the news, a new local metal album went on sale yesterday as expected, and it's Sault Michigan classical metal trio Theatre of Night's second album "The Dawn's Early Light"! Though the release on Canada Day rather than Independence Day is still a headscratcher, this American patriotic-themed album is now available to purchase through Reverbnation, CDBaby, Amazon, and other retailers to be announced (likely including iTunes), so check the above links to pick it up! The price does vary a lot though, as Reverbnation has it for $4.99 in mp3 format, while CDBaby's mp3 cost is almost double that, so do some price shopping. I have my copy already, and with it's successful scheduled release, I can guarantee that this month's CD review will be of "The Dawn's Early Light", but how will it stack up to "Christmas Night" as a classical metal concept album? I'm curious to find out for sure, so stay tuned to the SMS this month (hopefully earlier in the month) for my review, and pick up Craig & the Giles brothers' latest handiwork at the above links!

Finally for today, here's three assorted shorter stories from the last little while, and as usual, these are in alphabetical order by artist or venue name:
That's all for today, but stay tuned for more news tomorrow, and on Wednesday, keep an eye out for what we have planned for our fifth anniversary! Don't be an odd fellow or inhuman, for all that you know, we may just be going to a cafe in St. Ignace... are those too much of a hint? Stay tuned!
Posted by The Sault Metal Scene at 10:00 PM