Creatures of the Night

Members: (Members not in their last full lineup in italics. This information may be incomplete. E-mail me at robertfigures@outlook.com if you have any additions or corrections!)

Audio/Video: The only places to see/hear Creatures of the Night are on a pair of YouTube channels that uploaded six videos of the band in action, mostly from 2008 concerts. Bassist Mike Gualtieri's brother(?) Adam uploaded four videos from a couple of shows from November 2008 onto his old YouTube channel, including a surprising cover of Van Halen's "Eruption" and an audio-only cover of "Detroit Rock City", among other Kiss tribute performances, so click the above links to check those out! The other videos are from YouTube user soundguyjoe's YouTube channel, and among other videos featuring C.O.T.N. members, there's nice quality clips of their renditions of "Detroit Rock City" and, as featured below, "Strutter", so give the Soo's short lived Kiss tribute band a look above & below! 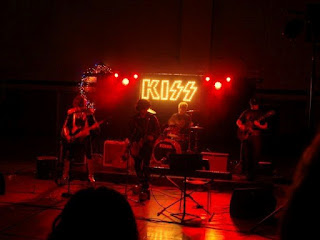 Info/Analysis: Creatures of the Night were a Kiss tribute band that was active from at least late 2007 through 2008. Featuring Sindicate & Free Beer alumni, they were a notable sight at the Dunnplugged concert series at the former Sir James Dunn Collegiate & Vocational School, and they filled things out with a surprisingly decent Kiss ambiance & look that helped them attract some positive notice, though I don't believe they ever played outside of school functions. Band updates quietly ended following their last YouTube uploads in the fall of 2008, and they're presumed to have went inactive shortly thereafter. I give the guys in Creatures of the Night props for even attempting a Kiss tribute band, let alone while still in high school, but the sound & experience is definitely a mixed bag. The on-stage effects work well, but the costuming is hit & miss depending on the band member. Musically, while they're all talented and can pull off Kiss classics, Andrew & Mike don't have the vocal range to do many of Kiss' songs justice (especially on Paul Stanley-sung material), but their instrumental talents are clear, especially in terms of the drumming! Though not a perfect tribute, Creatures of the Night did fairly good for their age at bringing Kiss to their high school audience, and hopefully the guys are still active in music somehow!
--------------------------------------------------------------------------------
I hope you guys liked this month's Defunct Local Band Profile! We'll continue our run of single band profiles (our longest since the 9 month run that ended last July) with another Sault Ontario band that was randomly chosen from our current list of 66 defunct/inactive Sault Ontario bands, but which band is next? We'll be taking a look at the short lived local metal quartet Losing Ground (with future State of Misery and Late & Loud alumni), so watch out for that profile on or around August 10th, and yes, we'll look at a Sault Michigan band again in September! That's all for now, but stay tuned for my review of last night's 3 Inches of Blood concert later today! Thanks everyone!
Posted by The Sault Metal Scene at 6:00 AM