Woods Of Ypres/David Gold News, Including Their Last Concert & Much More!!

We haven't done one of these for a while, but with news piling up, now's as good a time as ever to devote a single post to defunct local blackened doom metal band Woods of Ypres and their late frontman David Gold! In this post, we have some newly discovered reviews of their last album, updates on the upcoming Woods of Ypres tribute album & the songs to be included, a new interview with one of the band's last members, and leading things off, a very special audio upload from last summer, so here's what you need to know!

An audio recording of Woods of Ypres' last live concert has been posted online! A user on the website Reddit named Nikolai77 recorded the audio from their 45 minute set at Strange Matter in Richmond, Virginia on June 9th, 2011, and uploaded to MediaFire shortly afterwards with permission from David Gold, and with it making the rounds online, I thought it deserved a spotlight on the SMS! In their final concert, Woods of Ypres played (in order) "The Sea of Immeasurable Loss", "The Sun Was In My Eyes (Part 1)", "Falling Apart", "By The Time You Read This (I Will Already Be Dead)", "Wet Leather", and "Awaiting The Inevitable", with "Suicide Cargoload (Drag That Weight)" as an encore, making that the last song they ever played on stage. If you're curious, there's no foreshadowing to David Gold's death in the on-stage banter, and the "inevitable end" referred to before "Awaiting The Inevitable" was clearly relating to their tour & set that night, so don't read into everything for stuff that isn't there. The audio quality is pretty good, and Woods of Ypres sounded as brutal as they ever did in their doom era, though it'd have been cool to have heard at least one "Woods III" song or "A Meeting Place & Time" at this show.

This is a very important piece of media, especially knowing that this was the last time a live audience saw Woods of Ypres or David Gold live on stage, so I highly recommend downloading this file to check out Woods of Ypres' final concert, which you can do at this location! I hope video footage turns up of it if at all possible, but this will do for now. Extreme kudos to Nikolai77 for the upload! 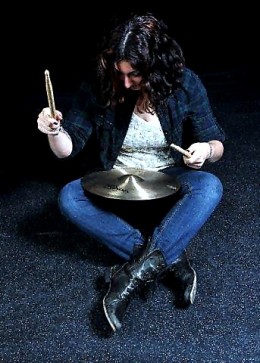 Also in Woods of Ypres-related news, a new interview/article with final drummer Rae Amitay has been posted online to check out as well! Conducted by Brave Words & Bloody Knuckles journalist Carl Begai and posted on his website on Friday, the article features Rae talking about her brief tenure with Woods of Ypres (which ended before they could announce that she'd joined) and the aftermath and related events in 2012. Rae discussed how she got involved in performing at the Ypres Metal Fest in Sault Ontario in April, how important it was for guitarist Joel Violette to be a part, thoughts on how that and the Toronto tribute show went, how she joined Woods of Ypres, the rough plans for 2012 had David lived into the new year, her musical past and influences, if she was intimidated playing in a band with another accomplished drummer, her favourite Woods material to play, the end of the band, and her current plans. In terms of new developments, the biggest thing revealed is that Rae has replaced David as the drummer in Joel Violette's black metal project Thrawsunblat, which I figured might happen, and she's a perfect choice to take over knowing how connected to Woods of Ypres she's become in such a short time!

This is another great Woods of Ypres article from Carl Begai, and it's nice to see how much Woods of Ypres can impact it's members, no matter how brief their tenure was! Though I'd love to hear Brendan Hayter's views on everything that's happened since November as well, Rae gave some great insights into the last while as a Woods of Ypres member and fan, and I bet she'd have been a quality addition had she been able to play with them this year! Head to this location for the full article!

Also today, here's more updates on "A Heart of Gold: A Tribute to Woods of Ypres"! The planned David Gold/Woods of Ypres tribute album is still very much in progress with some of the covers finished and sent for inclusion, and a reportedly final track listing has been released to both the album's Facebook group and brand new Facebook page. 21 songs by 21 acts are now confirmed, making this a likely double album, and the confirmed bands include Novembers Doom, Empyrean Plague, Gypsy Chief Goliath, Eclipse Eternal, Pagan Ritual, Panzerfaust, and local death metal quintet The Bear Hunters covering the songs they played at the David Gold tribute concerts, along with Woods alums Joel Violette & Rae Amitay playing "Silver" from "Woods V" (they played that at the local tribute show too), along with numerous other talented bands from many different regions. Notably, Novembers Doom frontman Paul Kuhr will join up with Will Bozarth for a cover of "Finality" under the band name Kuhrzarth, which sounds intriguing! If you're wondering, the track listing is broken down very evenly across Woods of Ypres' discography, with 4 songs each coming from all of their main albums except "Woods IV" (which has 3 represented tracks), while both songs from their "Home" single are also being covered.

Also of note: 9 of the 12 "Woods I-III" tracks being covered were included on the "Independent Nature" compilation album they put out in 2009, so I imagine David would likely approve of the final track listing. This sounds like a great compilation, and I hope this album is a huge hit when it comes out, which apparently may include a CD release party in Toronto, so stay tuned for updates as they roll in, and I've added the tribute album's Facebook page to our "Other Local Metal Links", as it's completely in honour of the music and compositions of a local metal great! And finally, here's some more reviews of Woods of Ypres' final recorded album "Woods V: Grey Skies & Electric Light"! On June 20th, DarkNoctus from the metal website Sputnik Music gave "W5" an average rating of 2.5/5, calling it "not bad, not good", though admitting it was much better than it's predecessors, which he didn't like (especially "Woods IV".) I appreciate his candor, but I disagree with his older album views, while liking his views on what improved and what could have lied ahead, so check out this review by clicking here! In a more positive review, "psorbh09" from the blog Ether Load Crunch gave "Woods V" 4 stars out of 5 on April 27th, calling it "an allegory of truths, questions, and living", while praising it's themes and messages, though the lack of criticisms doesn't gel with the rating. Nice review, so check it out at this location! Finally for today, Andy Turner from the metal website Bigger Than Satan gave the album a 4.5/5 rating in a review last month, calling "Woods V" a "fitting memorial to David Gold", while drawing attention to the upbeat yet dark nature of the album and a belief that the album is in tribute to David. Nice high praise (though he credited their last full lineup for this album when Brendan & Rae didn't perform on the CD), so click here to read this new review, and stay tuned for more at some point!

That's all for now, but stay tuned for a full news post later tonight! Thanks everyone!

Posted by The Sault Metal Scene at 3:30 AM