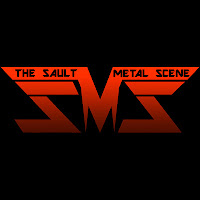 Happy Halloween everyone! I'm sorry I missed the Garden of Bedlam show last night, but the roads were really bad around my place, and I got busy with some personal stuff last night too, but I'll try and be at the next Garden of Bedlam concert, and hopefully The Rad Zone had a blast for their 18th birthday! I hope to stop in at the store in the next little while, I'm long overdue as it is! Also, we have a concert cancellation, as Caveman Morrison frontman Tym Morrison's solo concert at The Roadhouse Bar & Grill on Friday night is now likely off. A reason for the cancellation wasn't announced, but Tym deleted it's Facebook event page on Monday, which is generally a sign of a concert being cancelled. Disappointing, but hopefully his solo concerts return sooner or later! That all said, we have some other news to get to on this Halloween afternoon, including new videos, a returning local metal project, and leading things off, another "new" band for our inactive local metal band listings, so here's what you need to know!

We have another older local metal project to add to our local metal band links, and it's Pillory bassist/ex-Late & Loud guitarist Jonathan Tiberi's old solo project The Last Warrior of Rock! We touched on this project in 2010 on the site, but at the time, I didn't add it to our band links out of my assessment that it wasn't really a "band". I must not have investigated that far, because The Last Warrior of Rock definitely qualifies! Active from roughly 2007-2009, a then-clean shaven Jon launched the project out of his hometown of Welland before he moved with the project to Sault Ste. Marie in 2008. He recorded solo material under this name, apparently recorded a demo CD of some type featuring this material, and has a bunch of photos online in fitting "warrior" gear on the project's MySpace page, while he also maintained a separate MySpace page in 2009 for acoustic originals. On at least one photo, it's cited that he played a solo concert set as The Last Warrior of Rock on at least one occasion too, which would have been interesting to see!

Though he's improved his skills since, it's interesting to hear Jon's earlier original work! The Last Warrior of Rock's songs do have a darker & edgier feel than Late & Loud had, like on "Fields of Blood & Steel", while his unplugged tracks also work well, and actually compliment his singing range better, but the recording quality is somewhat rough. His acoustic page also has some videos, including a cover of Troubled Horse's "Bring My Horses Home", but I thought I'd share this live Sault College open mic night performance of an original named "So It Can Be" below, so give it a look, and The Last Warrior of Rock is now in our inactive Sault Ontario band links!

Next up, another local metal band is back after a recent stretch of inactivity, that being Sault Ontario industrial metal duo Riverin! According to their posting on their newly updated Facebook page yesterday, members/ex-Dirty Virgin bandmates Matt Hicks & Matt Clement have decided to resume activity with Riverin after "a hiatus", while also adding that the project & it's music means the world to them, and promising to have new music soon as well. Riverin were initially active from 2009 through last year, and had recorded at least eight songs at Quartertone Studios (most of which you can hear here) towards a planned debut EP before public activity dried up last spring, with personal Facebook page references ending last September. I'm not sure why Riverin were on hiatus for the past year or so, but it's great to see the Matts giving the project another shot, as Riverin were a welcome change from the usual metal subgenres we hear from locally, and they had some creative material!

No word yet on what will become of their old originals or EP plans, but stay tuned for Riverin news and notes as it rolls in, and they're now back in our active Sault Ontario metal band links!

Finally, here's a couple more of the new videos from local grunge band Haggith! Joining earlier uploads from their Canada Day weekend sets in Goulais River, the band posted two new videos from their sets that weekend onto their YouTube channel on Saturday, and they include a second video of their song "Livin' It On The Run" from a different camera, and as embedded below, a cover of Pink Floyd's "Wish You Were Here"! Given these shows' private nature, it's great to see more videos popping up from them, and the then-trio were in solid early form, but I am curious to hear them do some more energetic covers, as their covers (that I've heard) strike me as too reserved & not perfect fits for their sound. Still well done though, so give Haggith's Pink Floyd cover a look below, check the above links for more new and old Haggith videos, and keep an eye out for our last new video of theirs shortly!

That's likely all for this month (which was thankfully busier for news than September was) but stay tuned tomorrow or Friday for weekend concert previews & more news, as well as next month's "Where Are The New Albums" post soon as well! Thanks everyone!
Posted by The Sault Metal Scene at 12:00 PM