We're back with more news on this Friday afternoon, so what's on deck? Today, we have a new video from a local guitarist, more archive album uploads, and much more assorted news & notes, but first, here's the latest updates from a band we haven't seen on the stage in way too long, so here's what you need to know!

Local old school hardcore quintet Destroilet are continuing their somewhat quiet activity with some encouraging new band updates, including the confirmation that they are working on a new album! Online pages are still updated only scatteredly, but drummer Matt Waples has been keeping fans up to date on his personal Facebook page to the recording plans, which will apparently lead to a 12 track full length album (including reworked versions of the songs from their 2011 EP), with a planned proper CD release concert around Christmas, which is something that last year's EP never got. Their MySpace page briefly had some unfinished demos of these tracks in recent days (including the previously previewed "Eternal Fire" and a cover of The Ducky Boys' "Cross To Bear", among others), though they've since been taken down. I'm cautiously optimistic about these Destroilet updates, and hopefully we'll finally see them fully back and active before you know it! I don't know exactly why they haven't played live in over 20 months, but if this helps speed up Destroilet's return, I'm all ears, so stay tuned for more band updates as they roll in! 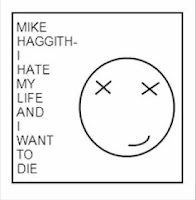 Next up, local solo artist and Haggith drummer Mike Haggith posted two more of his old solo albums onto his YouTube channel yesterday to stream for free! Uploaded as single files of the whole album in one video, they're of Mike's 37th & 38th solo albums "The Curse Was The Cure" and "I Hate My Life & I Want To Die", so click the above links to check them out! Both were released through the former Rotten Records in mid-2009 before Mike moved to Sault Ste. Marie, so while they're not overly familiar to Saultites, there's still some solid stuff there! I have yet to hear either in full, but there's some varied hard rock and alternative material in both albums, as you've hopefully come to expect from his local work. I've embedded the longer of the two albums ("The Curse Was The Cure") below to check out, but visit the above links for more, buy them at this location if you like what you hear, and stay tuned hopefully for more uploads of Mike's back catalog!

Also in the realm of new videos is the latest solo guitar cover from Ashes to Dust guitarist Alex Hemy, who posted this clip of him covering Marilyn Manson's "The Beautiful People" onto his YouTube channel yesterday! He knows the song pretty well, but his playing sounds a bit reserved compared to the original recording, and there's a lot of stretches in the original song with minimal to no guitar work, so I wouldn't say it's the best song to showcase Alex's skills with. Very good though, so give it a look below!

Finally for today, here's three assorted shorter news items from the last little while, and as usual, these are in alphabetical order by artist or company name:


That's all for today, but stay tuned for hopefully more news and updates this weekend, and I hope to see you guys at the Zombie Walk (or at least the afterparty!) Thanks everyone!
Posted by The Sault Metal Scene at 2:09 PM