It's time for something we haven't done much lately, that being a local metal video showcase! Lately, our video-heavy posts have been attached to reviews or concert previews, but today's just came together naturally, so what's on tap? We have a new acoustic video from a local hard rock band, that same band's drummer's newest archive album upload, this week's classic video, and a version of a local metal band's song that you may never have heard before, so let's kick off this all-video post!

We'll start with this new video from local grunge quartet Haggith, and while a planned upload of their entire Zombie Walk afterparty set has yet to occur, they're whetting fans' appetites with this acoustic rendition of their song "Sandman"! Uploaded to their YouTube channel yesterday, this is of Haggith guitarists Curtis McKenzie & Daniel Horton playing "Sandman" at their studio PaperClip Productions, and it's an interesting softer rendition that they have a solid handle on! I'd have preferred more reserved singing from Curtis to match this version's mood better, but it's still worth checking out, so give it a look below!

Also in Haggith-related videos is another full album upload from drummer Mike Haggith's solo project! Posted as one long file onto his YouTube channel last week, this is of Mike's 42nd solo album "Laps In A Lake Of Fire", which was mainly recorded at what's now Galactic Records & later released in December 2010 under the band name The Thorns, which was an older Windsor-based band of his. A darker, shorter, and more introspective album than some of his recent output, this was among Mike's first solo releases since moving to Sault Ste. Marie, and it's also worth hearing, so give it a listen below, and if you like what you hear, support Mike's solo work and buy it for between $3.50 & $5 at this location! 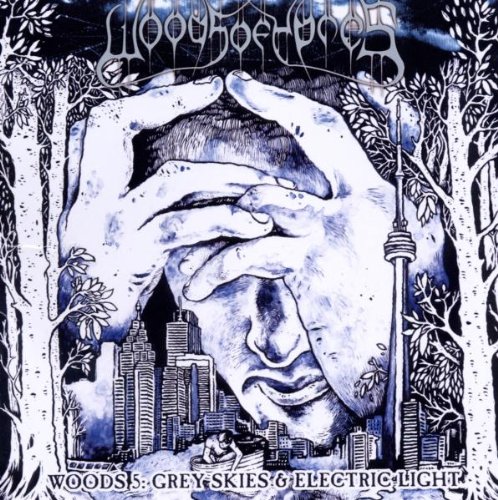 Thirdly today, I wanted to share a Woods of Ypres song that, in this form, I don't think many people have heard. As you may know, their last recorded studio album "Woods V: Grey Skies & Electric Light" came out this spring in multiple formats, and though the track listing was generally consistent, the album's limited edition vinyl release did have an exclusive track. On the second disc on the vinyl pressing, there was an alternate mix of "Finality" by "W5" producer Siegfrιed Meier, which has never been officially released by band and label sources through other media formats. While I own "Woods V" on CD, I don't have or play vinyl records actively, but I was curious to hear the producers' mix of "Finality", so I tracked it down after some searching & I thought I'd share it with you guys! The two versions are very similar, and seem to use the same vocal track, but Siegfrιed's alternate mix does have subtle differences that a cursory listen might not catch, including a more reserved & less guitar driven sound, and a slightly shorter arrangement, running 17 seconds less overall.

This is an interesting version of "Finality" for sure, and it takes this very morose and dark song into a bit lighter and more intricate territory than the original version had, almost as if it could be easily adapted to an unplugged setting. Kudos to Siegfrιed & Joel for including this on the album, even if on a limited basis! I encourage you guys to buy the vinyl copy of "Woods V" at this location if you collect vinyl or want to own every track from the album, but for the sake of wider exposure for the producer's mix of "Finality", I've uploaded it to our YouTube channel, and NO COPYRIGHT INFRINGEMENT IS INTENDED!! All credit goes to David, Joel, and Siegfrιed for this song, and feel free to stream it below!

And finally for today, here's this week's classic video! With former Lion Ride frontman Mikey Hawdon returning home for a set with one of his current bands (Toronto punk quartet The Fairmounts) for this Saturday's Halloween Party at The Algonquin Pub, I thought it'd be fitting to focus this week's video on Lion Ride again! This previously Facebook-exclusive video comes from a concert on July 21st, 2008 at The Salt Lounge in London, just days after the band's CD release show in the Soo for their "Awesome" EP, and the song played in this video is "Trust" from that same disc! Lion Ride's original & EP lineup was present here, including Mikey on vocals, Mark Rand & Marco Pedalino on guitar, Nathan Sauve on bass (in one of his last live appearances with Lion Ride), and drummer Marc Muto, and they show good chemistry and energy as we've come to expect from their concerts! The video quality is similarly good, but the audio is somewhat muffled, and attendee heads do create some black voids occasionally. Also, as a side note: Lion Ride's openers at this show were Toronto emo band The Labour Of..., whose bassist Brenton Ellis took over for Nathan in Lion Ride that fall!

Uploaded to Facebook over a year after this show by attendee Christopher Wakefield, you can see the original video at http://www.facebook.com/photo.php?v=550561685717. NO COPYRIGHT INFRINGEMENT IS INTENDED!! All credit for this video goes to Christopher and Lion Ride, I'm just trying to share this video with a deserving wider audience! This is a solid early video of Lion Ride in action, so check out this 2008 rendition of "Trust" below, and go see Mikey get his punk on with The Fairmounts on Saturday night!

That's all for today, but stay tuned for more news this week, along with weekend concert previews and more! Thanks everyone!
Posted by The Sault Metal Scene at 3:44 PM