In our last news post of the month, here's some all-Canadian news and notes in advance of Canada's 150th birthday next week! Along with some recent concert videos from out of town events involving local bands, we have a note on a move out of our active band links, and first, a LOCAL CONCERT ALERT for next month, so here's what you should know!

Local indie/hard rock quartet Bizotic will make their Gore Street Cafe debut on Friday, July 21st when they play alongside two touring pop bands from Victoria, British Columbia! The bands in question are "lazy pop" quintet Bridal Party (whose laid back indie-pop originals should fit the laundromat well) and Bright Boy (a more dream-like "shoegaze" group who should provide some interesting material of their own next month), so check out both acts to see what you think in advance! Bizotic will provide some extra heaviness and alternative stylings as the local featured attraction, and fresh off of last night's Deathsticks show, hopefully they can continue to ride the forward momentum at the cafe in three weeks' time! Note that Bizotic are actually billed first on the Facebook event page, but so are every local band on the Bridal Party/Bright Boy tour for other stops, so I'm not sure if they're playing first or last. In any event, this is an ALL AGES & "pay what you can" event with a 7:00 PM start time. See above for more details!

Next up, we have a band to move to our inactive band links due to a year's inactivity, they being local/Toronto celtic punk quartet Dustin Jones & The Rising Tide. Now, this is by no means an assumption that they're defunct, especially given members' busy personal lives and outside musical projects, but they have not issued a public statement or played live since opening for Hedley one year ago tomorrow at The Yard, and I have to keep our links current (also, that show is the only public local concert that they've played since August 2015.) Upon their launch in 2007, The Rising Tide united Inner City Surfers frontman Dustin Jones with the violin & stand up bass-wielding Jaaskelainen brothers (of Boot Hill Crooners & Wild Turkeys fame) and a rotating array of drummers, and they quickly became a fan favourite attraction locally and on the road with their unique brand of punk rock, which also saw them release three albums and even rock the Vans Warped Tour.

Dustin and company have been a reliable and original band with a solid reputation over the past decade, and they managed to make punk rock work with ease alongside a violin and stand-up bass! I don't think The Tide are 100% done, and would not be surprised when they announced a return show, but in the meantime, best of luck to Dustin, Sheldon, Marshall, Mikey, and their other former/live drummers in the future, and follow Tidal Records and Mission Control Studios for Dustin's recent work in local music production and promotion, as he's been busy on some great stuff! 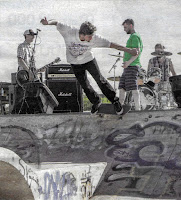 We'll close today with a pair of new concert videos from local bands on tour, starting with one from local alt-punk quartet A Dire Setback's out-of-town debut at The Asylum in Sudbury this past Sunday! Filmed by frontman Larry Babic's wife Karen for her personal Facebook page, she has more from this concert, but this video is the only one that the band shared publically onto their own Facebook page the following day. The video features the guys playing their original song "Everlasting Despair" from a good central angle of the stage, and while it's of very solid quality, venue lighting gives everything a blue/green tint. Also, it's worth noting that they're on the front cover of the current issue of Sault This Week, via this photo taken by Ali Pearson at last week's Go Skateboarding Day concert, with skater Mika Lindback grinding the ramp as well. Nice to see A Dire Setback get some visual play on one of our local newspapers, so check out the photo on the cover of this week's issue, and give their Sudbury concert video a look below!

Finally, here's a new video that only just surfaced from local doom metal trio AlgomA's headlining concert in Windsor a year and a week ago! Filmed by attendee Nancy King, this was only just publically shared by guitarist Boyd Rendell on Wednesday onto the Facebook event page for the Uncle Ray concert at The New A in two weeks that AlgomA are opening. There is synergy afoot here, as Uncle Ray opened for AlgomA at The Windsor Beer Exchange during that stop of AlgomA's 2016 summer tour, but now the roles are reversed as Uncle Ray travel north! The video in question was live streamed by Nancy at the time, but re-posted by Boyd this week, and it features AlgomA playing their songs "Extinct Volcanoes" & "The Longest Swim" (well, the first chunk), but it sill adds up to over 13 minutes of crushing sludge metal to kick off their set that night! Inconsistent lighting but solid audio and a nice close vantage point, though unfortunately, it's privacy settings mean that it can't be embedded on external websites, even though it's publically available on Facebook.

Until/unless that's changed, I can't embed it here, but give it a look at this link if you want to see AlgomA live in Windsor last year! That's all for now, but stay tuned for this month's CD review next! Thanks everyone!
Posted by The Sault Metal Scene at 12:00 AM