Happy Sunday, local metalheads! As you're aware, I was at the Frightlight concert/CD recording session last night, so my review of that is top story for today's post! I was hoping to tweet a bit more during Frightlight's set, but I was rocking out too much up front, so my apologies! Afterwards, stay tuned for a newly discovered local metal band and ANOTHER local hard rock band's bassist search! 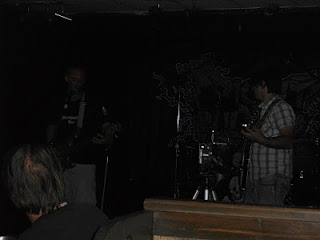 Good crowd last night at Coch's Corner for Frightlight, everyone looked ready to have a good time, and the openers, Marshmellow Gun, kept everyone rightfully entertained as the openers! Remember when I said that they had a "punk meets Tom Waits" style after seeing their jam videos? Nothing's changed, but I think playing live brings out the best in them, cause I honestly wasn't really digging their videos. Live, they had more energy and they shown off a couple of songs that deviated from form a bit, so they have some versatility! At points, frontman Eric Priest sounded a bit like Dirk Becker from Sykotyk Rampage, which was oddly cool! My biggest complaint about Marshmellow Gun's set was that most of their songs sounded exactly the same, the songs with different styles were minimal and mostly near the end of their set. Even still, they weren't bad for a first time seeing them, we'll have to see what's in store for them next! (Sorry for the photo quality, I was in a far booth.)

Frightlight were next, and despite some false starts for amp issues (remember, they wanted this perfect for the CD recording), they were great! Decked out in their best horror costumes and with a whole bunch of originals, they were on top of their game last night! It took them a bit to get their energy going, but eventually, band members were mingling with the crowd mid-song, jumping on chairs and tables, and generally having a great time! J.D. Pearce sounded as good as ever on lead vocals with a good punk energy and heaviness, well complimented by Rick White on guitar, who definitely knows his pink riffs and managed a couple good solos! I was also really impressed with Mike Gingras on bass, his lines were catchy and audible and he was clearly enjoying every minute of the concert! And of course, you can't forget about Jeff Richards on drums, he was awesome throughout the night! I don't think anyone's going to put Frighlight high on the list of the most technical local bands, that's not their style. They're horror punk/metal, and they nailed that!

The majority of their set was originals like "Fright Night", "Dead Town", and "Scream", which you'll no doubt here on their upcoming debut album, literally! But a good portion of their set was focused on covers from bands like The Misfits, The Ramones, and G.G. Allin, and it was during the covers were I felt transported back to the good old days of seeing J.D. and Rick's old band Fitswitch rocking out at The Oddfellows Hall! Hell, they even played "When Eagles Dare", which was a hidden track on Fitswitch's "Rust Angel E.P."! During the covers, everyone seemed to join in with the band to help sing, from former Fitswitch guitarist Andrew MacDonald to former D.O.T.H. drummer Johnny Lowrie, and others! It was just a pure party atmosphere during the covers portion, and that was awesome, though I wish I knew more Misfits songs so I could have sang along better. Now if they played some Danzig, I'd be all over that, but it was pure raw fun regardless!

Overall, it was a fun concert, and it was great to finally see Frightlight live after over eight months of waiting and bad timing! It's the next best thing to a Fitswitch reunion, but with enough horror additions to make it stand out even brighter! If you missed them, don't worry, they're playing a special benefit concert at Foggy Notions this coming Saturday at 5:00 PM, so head on down there before you go to Rotaryfest for Garden of Bedlam! And of course, I'll keep you posted for when their album comes out! Yes, I got photos, click here to check them out, and I of course got a video! So here's Frightlight playing their original song "Dead Town"!

Now, two more news stories to cap today's update, and firstly, I have found another local metal band! They are Moss of Eckerman, a defunct metal band from Eckerman, Michigan, which is just outside of the Soo! Eckerman's also the home of inactive local bands B3nt Rollercoaster and Life's Eclipse, and Moss of Eckerman are another very talented band to come out of there! They were a five piece metalcore band that appear to have only been active in the mid-2000s, but from what I'm hearing on their PureVolume page, they have promise! Reminds me a bit of Sick Of It All vocally, and the two songs they uploaded ("Undefeated" & "Dreams and Nightmares") have nice grooves, though the production doesn't effectively show their heaviness. Their page suggested they were working on pre-production of a CD, but they haven't updated their page in a few years either, so it looks like they've broken up, but they are a promising band! Check them out at this location!

And finally, throw another local hard rock band onto the list of bands searching for bassists! Half Past have parted ways with bassist Arthur Lacasse. Frontman Luke LeBlanc confirmed with me on Facebook that it was due to personal commitments of Arthur's, and there's no bad blood at all. Arthur was originally the band's rhythm guitarist when they began as Fingerbone, and eventually switched to bass after the departure of Harley Syrette from the band. Sad to see him go too, he's a great musician and a very nice guy! So the band currently are on the hunt for a new bassist, and unlike with Stillbroke and Sneaky Pete, the band haven't launched a public bassist search yet, though Luke told me that they have a couple names floating around. Still, if you play bass and would be interested in playing for Half Past, message the band on Facebook, it'd never hurt! I'll keep you posted on the Half Past bass situation as updates come in! Oh, and just to add, I've recieved word on the reasons for the bassist departures in Stillbroke and Sneaky Pete. Apparently, Kyle McKey wants to explore some non-musical ventures right now, and Dave Grimaldi moved to Sudbury. Thanks to Laurie Frigault and Brian Cattapan for the updates!

That's all for today, here's what's coming up on The Sault Metal Scene! Tomorrow will be the second-last entry in our GarageBand Profile Mini-Series, as we take a look at the sorta defunct local hard rock trio Sin Stereo! The series concludes on Thursday, you'll wanna be here for that too! And yes, lots of news and updates will come throughout the week, along with a review of the Frightlight benefit show AND Garden of Bedlam at Rotaryfest in exactly one week, and the new SMS poll will be up that day as well! Keep your browsers pointed here!
Posted by The Sault Metal Scene at 1:35 AM