An Upcoming Outdoor Charity Concert, Plus More News And Updates!!

Can you believe that this is our 29th post of the month? That's an SMS record, and we still have four days left in the month! The news and updates keep rolling in, and today's post includes a bit of backlogged stuff too, but all of it is worth mentioning! Let's begin!

I recently got an e-mail from Chris Wilson, who's looking to hold an outdoor fundraiser concert on August 14th, and asked for my help in getting the word out on this event. The show would be in benefit of Pauline's Place Youth Shelter on Pim Street, and Chris is looking for local bands (presumably of any genre) to fill a 9-10 hour timeslot for this concert. Bands won't be paid for performing, this is a charitable fundraiser, but it's for a great cause, and could get your band some exposure! No word on already confirmed acts, where the show will be held, or any other details yet, but I imagine those should come out sooner or later. So if you or your band would be interested in playing this outdoor benefit concert for Pauline's Place, e-mail Chris for more information at lp_k_fa@hotmail.com! Sounds like a nice idea, we'll have to see how this concert shapes up! As I hear more, I will let you guys know!

Next up, the final installment of Woods of Ypres' 2010 tour diary on Decibel Magazine's website is now online! Once again, bassist Shane Madden detailed the happenings, events, and notable moments of more of their tour dates, this time focusing on their final American show in Worcester, Massachusetts, and their last two Canadian dates in Toronto and Ottawa, with a conclusion afterwards to sum up the tour! We get such things to read about as what the band used to temporarily repair a broken van window, the surprising ease of crossing back into Canada, the "homecoming" feelings that the Toronto show gave them (remember, Woods were based out of Toronto in the mid-2000s), what happened in an "alternate universe" on their way to the Ottawa show, and much more from their last three tour dates! Sounds like the tour went well, though I still would have loved to have seen a local show! I know David Gold isn't highly enamored with here, but I know I'm not alone in saying that they should play here again down the road! Check out the final tour diary installment at this location, and I'll keep you posted with more Woods of Ypres updates as I hear them!

Thirdly today, I have a video that, though not newly uploaded by any stretch, is new to me! If you were around the local music scene in the mid-2000s, you may remember that local grunge band No Arrow were originally known as Murder Playground, and have a couple videos floating around online. This one, I've never seen until the other day, and it's a live performance video from New Years Eve 2006 of Murder Playground covering the Nirvana classic "Breed" at Madisons Pub! The video is in black and white, and while the video quality isn't bad, the audio is VERY scratchy. So I'm embedding this here for the historical coolness moreso than to listen to, but do check it out! I've always liked Murder Playground/No Arrow, and the dancing concertgoers in the video would likely feel the same! Check out this classic clip below, or at No Arrow's MySpace page! 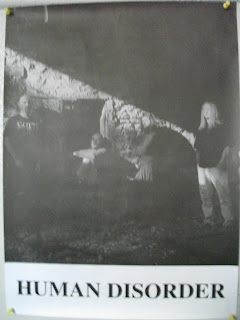 And finally, I have some cool stuff to share from the local scene's past! Glen Thomas, prolific local drummer and mastermind of The Barking Eye, graciously gave me two really cool locally-relevant metal posters a couple weeks back, and I finally have room to show you guys! One is a classic poster, presumably from a concert, of Human Disorder, the Port Colborne metal band featuring Saultites/current Phatstick members Jason Taillefer & Joe LaVergne! Plain, but effective, you can check it out on your left! The other is an authentic concert poster from way back in the mid 1980s (I'm guessing 1984), from Canadian metal legends Anvil's show at The Ramada Inn (now The Best Western!) Yes, they were here in person, on April 13th of that year with special guests Riggy Zomba, a local band that later became known as Vandyl! Glen profiled Riggy Zomba/Vandyl in May on The Barking Eye, click here for details on them! Europe-style glam hard rock quintet, not bad at all, though none of the members are largely active in the local scene nowadays to my knowledge. I love both aspects of the poster, the "Forged In Fire" poster artwork and the photocopied local show poster stapled to the side. You just don't get posters like these anymore for local advertising! Huge thanks to Glen for giving these posters to me, both proudly adorn the walls of my room! Check out the Anvil/Riggy Zomba poster below, and also below that, Glen's YouTube upload of Riggy Zomba's song "Teenage Rebel" from their Vandyl days! 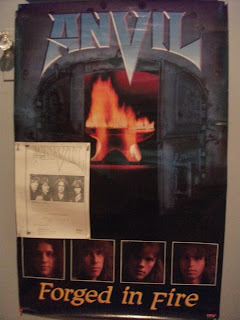 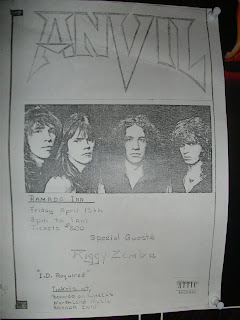 That's all for today, but stay tuned over the next few days for previews of this weekend's shows, my next album review (here's a hint: It's a band I've reviewed an album of before), my next out of town profiles, and more! Stay tuned!

Posted by The Sault Metal Scene at 5:41 PM

How is Glen Thomas prolific? Dude that guy has done nothing that is prolofic, except burn bridges with his friends. I really enjoy reading this website but I think you are giving that guy too much credite.

Thanks for the comment and readership, I appreciate it!

Prolific refers to the bands he's been in, not his character or talent. If I'd said "amazing" or "universally loved" instead, I could see your angle. No matter what people think of him, he's been in a ton of local bands, which is why I said he was prolific.

I know he's burned a lot of bridges, and he has many strong opinions that I don't agree with at times myself (I find he's too harsh on bands like Gates of Winter and Gsis Murphy, for example.) He's always been nice to me and the SMS, and I'm not going to get into the business of bashing or discrediting local musicians for reasons other than their talent.

Thanks for the comment though, I note and accept your criticism! No offense is meant at all with my above comments!

Thanks buddy,
I appreicate your response. It is one thing to have appresiation for musicians like yourself and quite another to have guys like this verbally bashing others online then not owning up to his remarks. Gates rock, Gisis murphy are cool too; what is next? Will he bash Woods? or turner up? That's far from prolific. I will continue to read this forum becuase you mention local bands and promote the scene; right on man!

Well, again, prolific was meant to refer to the large amount of bands he's in, not his opinions of certain bands and people

But really, everyone's entitled to their opinions, even if they're more open or controversial. I certainly don't agree with everything he's ever said, but he's a good local drummer with a long history in the scene, no matter his opinions of certain bands and people. He just chooses to make his opinions public, no matter the cost.

Thanks again for the compliments, I really appreciate it! It's people like you that keep the SMS going!