Peril Concert Previews, The One Year Anniversary Of David Gold's Passing, And Our Latest Christmas Surprises!

We're back with another news post on this Friday afternoon, and while we're still mourning Andres' loss (remember to attend his services The O'Sullivan Donnelly Funeral Home on Sunday afternoon!), the news continues rolling in, so what's in today's post? We have our latest Christmas surprise song uploads, as well as a memorial note for a sad anniversary being remembered today, but first, here's previews of this weekend's only known Sault Michigan metal concerts!

Charlevoix classic metal trio Peril are returning to Sault Ste. Marie for concerts TONIGHT AND TOMORROW NIGHT! These will be their last shows at any location of 2012, and the last heavier shows in the area that I can 100% source for this year, so if you're up for some metal, head on down to The Rapids Lounge at the Sault Michigan Kewadin Casino tonight or tomorrow! Peril's heavy metal cover assault is sure to entertain local fans once again this weekend, so don't miss Jeff, James, and Brooks in their last shows of the year! Admission should be free for these 21+ concerts, and I'd expect both to have 10:00 PM-ish start times. For more details, check the above links! If you're in Sault Michigan this weekend, don't miss Peril, as they are certainly local favourites with their entertaining classic metal sound, and for a preview, here they are covering Ozzy Osbourne' "Crazy Train" a few years back!

Next up, we need to address a sad anniversary, as it was one year ago today that we lost Woods of Ypres frontman David Gold, at just 31 years of age. As you may remember, David's passing deeply shook the local metal scene and beyond, especially considering his talent, success, and promising future with Woods of Ypres and his other projects, and I hope over this holiday season, his family takes solace in the love and respect many of us had for him and his music. 2012 was poised to be Woods of Ypres' biggest year yet, and posthumously, it was in many ways, thanks to their highly rated final studio album "Woods V: Grey Skies & Electric Light" and the well regarded tribute shows both here and in Toronto this past spring. Personally, I wouldn't consider "W5" to be my favourite of their albums (I'm still partial to "Woods III"), but it's important, well performed, very emotional, and a fitting close to Woods of Ypres' 10 year run. I hope that somehow, somewhere, David knows the impact he left and how much he's regarded and missed locally, in Ontario, and beyond. As he said in "The Will To Give", "there is no destination, there is only the journey." Like with the Duchesne family, keep the Golds in mind over what's sure to be a bittersweet holiday season. R.I.P. David, and stay tuned soon for our first taste of next year's Woods of Ypres tribute album!

And finally for today, here's our third of five surprise Christmas song uploads, those being four songs from defunct Sault Ontario hard rock quartet Infrastrate! Active from roughly 2003-2007, they made a solid name locally before relocating to Ottawa in 2005 for school, and they are sure to be fondly remembered during their mid-2000s run here and there! Infrastrate's lineup featured singer Joey Paciocco, guitarist Patrick Webb, and Nick & Ben Ochoski on bass & drums respectively, and this is the same lineup that recorded their debut EP "Phase I: Commencement" in August 2005 at Cherry Valance Sound. The following year, the band began work with former Laris Records owner & Northern Rocks Magazine founder Chris Rancourt on a full length album at Audio Valley Studios in Perth, with the CD to be released in 2007, but only a couple songs from their 2006 sessions made it online before they quietly dissolved, and the members are largely not in music currently from what I can tell. 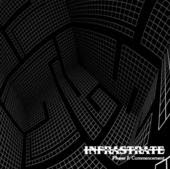 Their EP is one of the most elusive recent local albums that I've ever tried to find, with few leads for a physical copy & only two songs ("Hindsight" & "Smoke & Mirrors") from it available for streaming, but at least some extra songs from Infrastrate's 2006 output are online, those being "Causal Nexus" (a better quality re-upload on our channel) & "Tyrannade", so I thought I should post what I had online for Christmas, and in the hopes of gaining some leads to finding "Phase I: Commencement in full". Infrastrate were talented, with a melodic hard rock sound and longer well stocked originals that suited their talents, including solid vocal work and nice guitar melodies! The 2006 songs are arguably better for skill and recording quality, but all four tracks are worth checking out, and hopefully down the road, the guys will turn up again (or at least publicize more old tracks.) Check out "Hindsight" below, and stay tuned for our last Christmas surprise uploads (hint: they're two full albums) on Sunday and Tuesday!

That's all for today, but stay tuned for this month's YouTube Channel Profiles TOMORROW, and for more news this weekend! Thanks everyone!
Posted by The Sault Metal Scene at 1:13 PM