Members: (Members not in their last full lineup in italics. This lineup information may be incomplete. Let me know if you can fill in any blanks!)

Audio/Video: With MySpace's loss of millions of songs on their servers last year, The Role Models' four demo originals hosted there from 2006 are no longer streamable. No other media is known to exist publically online, but Brad's own solo recordings may harbour some similarities to The Role Models, if in a more stripped down format, and you can check out recordings of him at this link and at scattered other locations. Of course, Brad & Dave's past work with The Inner City Surfers also shared some obvious thematic links. 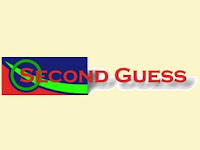 Members: (Members not in their last full lineup in italics. This lineup information is incomplete, particularly concerning Dylan's role in the band. Let me know if you can fill in any blanks!)

Info/Analysis: Formed by best friends & high school students in 2004, Second Guess reportedly played a gig at The Downstairs Bar in January 2005, and had teased shows that same year opening for Kiros and The Crossed, though it's unclear if those sets took place. Second Guess were reportedly working on an original CD, and listed 7 songs on their setlist on their Tripod page, though aside from a brief reference to covering Nirvana material, no direct hints towards their sound were made. Garrett, Angelo, and John moved on to the short lived ska punk band Break The Violence in 2005 before forming their best known band As It Stands later that year, while Cody would find greater renown locally as a folk musician, currently performing in Edmonton under the alias John Hewitt. I have no way of knowing how Second Guess would have sounded, but their lineup definitely had talent that blossomed very well in the ensuing decade+, and hopefully some media surfaces!
-----------------------------------------------------------------------------------
I hope you guys liked this month's Defunct Local Band Profiles! Next month in this series, we have a Sault Michigan band next in our rotation, but because the randomly selected band that I drew for next month doesn't have enough surviving information, I randomly added a Sault Ontario band to fill things out. As such, we'll be looking at inactive Sault Michigan hard rock band Bucksaw (a.k.a. Dirtbag In A Dress) and a Sault Ontario band we just added to our links last month, that being defunct alt-punk trio Nowhere Fast! Look for these on or around May 10th, and for weekend concert previews and more on the site next! Thanks everyone!
Posted by The Sault Metal Scene at 1:14 PM