Coch's Corner Halloween Party Review, Plus News On Our Next CD Review!!

Happy Halloween! Hope you guys have a great night, whether you have party plans, are taking the kids out, or are going out for candy yourself! I'm handing out candy tonight, but I had my fun last night at Coch's Corner's fifth annual Halloween party! So today's post is largely dedicated to reviewing that. Stay tuned afterwards for news on our next CD review, but let's first go over what went down last night! 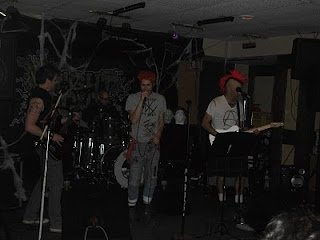 First off, I should say that the $5 cover was warranted, as Coch's Corner was more than made up for the Halloween season, with spider webs, skulls, spooky lighting, and more covering the interior! There was a great turnout for this show, which I was very pleased to see! And many fans in attendance were in the Halloween spirit, including a few local band notables decked out in costumes! There's too many to count, but I'll give huge metal points to Adam Chillman from Papa Fogals Chair for his Zakk Wylde costume! There was a costume contest later in the night, but we'll get to that in a bit. For the record, I was Mr. Hat from South Park, but when the bands played, I removed the hat to avoid an obstruction of view. The opening band of the evening was The Mothermakers, who traded in their Glamoween persona from last year for an old school punk look and theme this year. They got a warm reception from the crowd, and people did dance to their tunes, which included covers of bands like The Dead Kennedys, The Buzzcocks, The Ramones, The Clash, and more!

I have to say, they underwhelmed me a bit. Though they looked the part, much of their songs didn't have a lot of the punk aggression that I was hoping to hear, and the singer seemed to be a bit lost when trying to improvise backing vocals. Their double covers of Radiohead's "Creep" seemed especially odd given that it wasn't a punk classic, and they played it twice in the normal style AND in a punk fashion. They're not bad, but they need to have a bit more aggression to their stuff. Also, this is just a personal remark, but it'd have been nice to hear some Black Flag covers!

Following them on the bill was horror punk/metal band Frightlight! The fact that they weren't headlining seemed odd to me given their local profile and what they were selling at the show, but hey, it gave WinkStinger a nice high profile! Keeping with the Halloween spirit, the band members were mostly in their usual Frightlight stage makeup, though drummer Jeff De Rose played the first chunk of their set dressed as The Count from Sesame Street! As usual, we got a bunch of great originals like "Fright Night", "C.H.U.D.", and "She Screams", along with some Fitswitch and Misfits covers like "Rust Angel" and, fittingly, "Halloween", among others! Plus, Andrew McDonald (in his bag of weed costume) joined in once again to cover GG Allin's "Bite It You Scum" as well! I felt that they were playing a couple of songs faster than they have on earlier performances, and you could sure see in Rick "Styles" White's guitar playing. His right hand seemed to be on fast forward at points! The great thing about Frightlight is that their songs are easy to get into, and are hard to mess up, so you tend to know what you're getting, and that's good! Johnny Pints has a great handle on aggressive punk singing, Eddie Fright's bass work stands out well, and Jeff's coming into his own on drums! Great set, I can't wait to see them again!

Oh yeah, the costume contest? Some of the best costumes were called up to the front of the stage to be judged by crowd reaction as to who won a free pizza from Coch's Corner! There were some great ones up front, including Freddy Kreuger, Beetlejuice, Magnum P.I., and a pair of contestants on The Price Is Right (complete with Contestants Row), but the prize easily went to a guy crossdressing as Cher from her video for 'If I Could Turn Back Time"! If you've seen that video, you'll know why seeing a guy dressed like THAT would turn heads, and he deservingly won!

Headlining were local hardcore metal band WinkStinger in just their second live performance, and you want to know my biggest disappointment of their set? No costumes, save for Jonas Gasperas' tiny top hat. But really, when that's my only real complaint, that says a lot for them, cause they were awesome! They sound just as brutal as they did last week, and they have a great handle on their originals so far! This time around, I tried to pick up more of their music and their stage presence, and Jesse Cook really stood out on guitar! His solos were great, and he played with a lot of technical savvy and melody! Alan Wells' vocals are awesome, high pitched yet very aggressive, but I have to say, he needs work on his stage presence. Much of the set saw him looking sideways and not moving around much, but hey, that will likely improve over time! Jason Ladouceur's riffing was spot on, and Ryan Sherman's bass lines sounded good as well, even if neither were front and center. And Jonas is just as good on drums as he ever is, and he really seemed to enjoy himself! After just two shows, these guys have a very bright future if they keep on the same path, but the crowd response for them was VERY surprising. Compared to the Zombie Walk afterparty, it was almost night and day. Where was the enthusiasm? They ruled, they're brutal as hell, and I can't wait to see them again!

Overall, that was a fun first trip to a Halloween show at Coch's Corner, and hopefully I'll be at next year's! They pulled out all the stops and delivered a great night of Halloween entertainment that was worth the $5 cover! For my photos from last night, including a couple costume shots, head to this link or visit The Sault Metal Scene's Facebook page! And yes, I have videos, so here's Frightlight's new original "World War Z" and Winkstinger's "Fuck The Rest"! 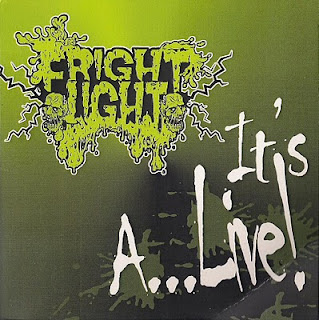 Now, you guys may be aware that with November beginning tomorrow, we have another CD review to get to next month. So what are we reviewing? I honestly wasn't sure, but now we know! Last night at the Halloween show, Frightlight announced that their new album, "It's A...Live!" was on sale! That news was not promoted in advance, so that was a nice surprise! It went for $10, and features 6 of the songs that they performed at their July 10th concert at Coch's Corner, including their originals "Fright Night", "She Screams", "Dead Town Anywhere", "They All Float", "C.H.U.D.", and their cover of Fitswitch's "Rust Angel"! Note that their original "Dead Skin Mask" didn't make the cut, along with their various other covers. The packaging is fold out cardboard, and it features acknowledgments, credits, band members, internet links, and the track listing on the interior. No lyrics though, sadly. Nice of them to thank me in the acknowledgments too! I should also note that the artwork, as you can see on the left, is NOT of any of the public entries in the album art contest, for whatever reason. I thought Kevin Powe's should have won, but hey, what can you do? As for the songs themselves, I'll wait until the CD review before I make judgements, but the quality is fantastic, so kudos to Nick Jackson for the great production! Remember to buy "It's A...Live!" at Frightlight's concerts, and stay tuned for my review of the album THIS WEEK!

That's all for today, but stay tuned for a load of big stuff this week! On Tuesday, our newest entry in the "Where Are The New Albums?" series returns, while I have some news to share and get to over the next couple of days as well. And yes, we'll review "It's A...Live" too, hopefully sooner than later! Stay tuned for all that very soon! Thanks everyone, and have a great Halloween!
Posted by The Sault Metal Scene at 2:24 PM