For the first time since Saturday, we're covering news and previews in a post on the SMS, partly due to a recent news slowdown, but we do have a full news post coming this weekend! Today's post is devoted to previews of this weekend's hard rock concert previews in the area, mostly in Sault Michigan, though we have some LOCAL CONCERT ALERTS for THIS WEEKEND and next too! Also, if you saw a recent Rockstar Bar Facebook group posting referencing a Stiffler's Mom gig this Saturday, that appears to have been premature or incorrect, as it's since been removed from said post. If anything changes again, we'll let you know, but let's begin our previews, and check out our review of AlgomA's new CD in the post below this one!

Ishpeming/Marquette hard rock cover favourites Nudge have announced two more local concert weekends for 2014, as they'll be back at The Satisfied Frog in Sault Michigan TOMORROW & SATURDAY NIGHT, before returning there on Friday, December 12th & Saturday, December 13th! Apologies for the short notice for this weekend's shows, the band just confirmed them via this weekend's Facebook event page. The gigs this weekend are either new additions or are replacing shows at a further location (they weren't listed when we covered Nudge's Soo dates last month), but December's are absolutely new, and will almost certainly mark their last local dates of 2014. Tomorrow's show will also mark Nudge's first local appearance with new drummer Jeremy Weiger, who replaced the again-departed Eric Schlumpf last month, though some fans may see him accompany frontman Danzo McCracken at his solo acoustic set at The Frog tonight as well. Nudge seem to rotate drummers as frequently as Spinal Tap, but hopefully Jeremy sticks!

Both this weekend's and December's concerts have 21+ age limits, no announced cover charges, and 10:00 PM start times, so check the above links for more details, don't miss Nudge back at The Satisfied Frog TOMORROW & SATURDAY, and here's Nudge covering Godsmack a few years ago!

Also in new concerts, Sault Michigan hard rock quartet 415E will make their Dondee Lanes debut NEXT WEEKEND (October 24th & 25th), which follow their previously announced gigs at The Rapids Lounge at the Sault Michigan Kewadin Casino TOMORROW & SATURDAY NIGHT! Next weekend's shows (possibly their first ever at a non-Kewadin venue) were announced on their Facebook page two weeks ago. It'll be cool to see the guys at a different venue for a change, so if you like the Dondee, don't miss next weekend's shows! Before then however, 415E will make their first concert appearances in 2½ months this weekend when they debut their new quartet lineup, with Mitch Goetz and Tony Hubbard replacing Jack Slater & Devin Anderson respectively on bass and drums, ending a long stretch where founding members Dave Menard & Chris Hubbard played shows as a duo. Great to see a full lineup again, and fans of Dave, Chris, and Tony's old band Splitshot will be glad to see them back together again!

Both this weekend's Rapids Lounge gigs and next weekend's at the Dondee have 21+ age limits, no announced cover charges, and likely 9:00 PM start times. For more details, visit the above links, don't miss a chance to see the new look 415E lineup in action this month (including TOMORROW & SATURDAY), and here's 415E live last year! 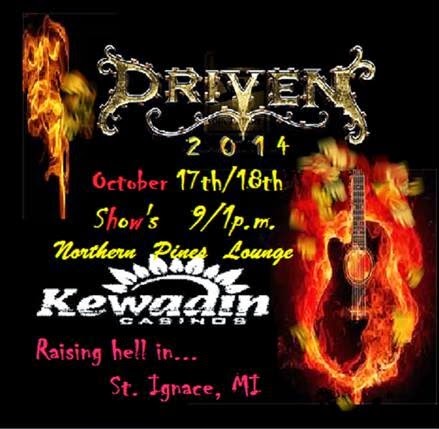 Moving to shows that were 100% previously announced, Cheboygan hard rock trio Driven will return to The Northern Pines Lounge at the St. Ignace Kewadin Casino for headlining gigs there TOMORROW & SATURDAY NIGHT! Last seen in the U.P. at a private gig in August (and publically in June), this will sadly be Driven's last concert weekend at any location with singer/bassist Tony Rhome, who's retiring from the band in order to settle down, spend more time with family, and pursue new interests, as per a heartfelt message that he posted on the band's Facebook page two weeks ago. Driven fans are bound to be disappointed by this news, but our best wishes go out to Tony, and hopefully fans send him off with a bang this weekend! For what it's worth, Driven have not announced if they will continue without him yet, but they haven't visibly announced later gigs for this year either. This weekend's shows have 9:00 PM start times, 21+ age limits, and no announced cover charges, so don't miss Driven's last local gigs with Tony THIS WEEKEND, and here's the guys covering Metallica!

Lastly, we'll head north to Sault Ontario, where Caveman Morrison frontman Tym Morrison will kick off his 46th straight week of concerts at The Harp Bar & Grill on Pine Street with solo acoustic gigs TOMORROW & SATURDAY NIGHT! Unlike the last few weekends in his ongoing arrangement with the former Madison's Pub, Tym is outwardly promoting the Saturday half of this weekend's sets there via the Facebook event page, so keep both tomorrow's hosted jam night and Saturday's pure solo acoustic show in mind! As usual, you can take in Tym's entertaining covers either night at around 10:00 PM, there's no announced cover charges, and you must be 19 to attend. For more details, check the above links! It's good to see Tym's successful run at The Harp moving steadily along, so don't miss it on the Ontario side, and here he is covering Journey!

That's all for today, but stay tuned for more news and notes this weekend, plus our next poll on Saturday! Thanks everyone!
Posted by The Sault Metal Scene at 8:00 PM