Well, the news keeps rolling in, and in tonight's post, we focus on a number of topics we touched on in recent posts, including more LemmaFest updates & more on Bring The Misery's new guitarist's old local work, but first, here's some LOCAL CONCERT ALERTS relating to an upcoming local festival!

The official lineup for this year's Rotaryfest main stage (or simply "The Stage") at Clergue Park has been announced, and luckily for you hard rock fans, there's a couple bands up your alley for the Rotaryfest main stage schedule! We'll start on Friday, July 15th, as local classic hard rock cover quintet That's Chester will take the stage once again after rocking the Friday of Rotaryfest weekend last year as well! They headlined that night last year, but they year, they'll be at 8:00 PM on the 15th, but either way, they'll have lots of great classic hard rock covers in store at Clergue Park, in a rare non-Docks appearance! Actually, the top 3 headlining bands from the Friday last year are the same this year, just in reverse order, so here's the full lineup for Friday! The headliners for this night in 2011 are local country rockers Thin Ice, with local veterans Mustang Heart keeping the country going as the co-headliners! The Friday lineup is rounded out by veteran local bar band Fusion, blues band Lady Sings The Blues, and local bluegrass quintet Tyler Marshall, Brandon Ladd, and Tradition Continued opening at 4:15 PM on the 15th. Remember, this is FREE & ALL AGES, so head out for this varied lineup of talented local bands on July 15th! And now, to the Saturday lineup, also with a hard rock band!

On Saturday, July 16th, fellow classic hard rockers Full Circle will rock Rotaryfest for the first time when they play at 9:00 PM as the highest slotted local band! It's awesome to see them get such a high placement, they'll deliver a great set of classic hard rock covers for the Rotaryfest attendees on that night! Also note that, according to Rotaryfest's website, Full Circle frontwoman KT Antler will be co-master of ceremonies on the Saturday, which is cool to hear! For the remainder of the lineup, the headlining band will be Eagles tribute band Hotel California, with Full Circle co-headlining, and from the top down, the bands include local dance rockers Boogie Fever, country rockers Bone Yard (also featuring That's Chester members), veteran folk rock cover band Spyder's Web, local rock band Moneypenny (anyone have details on them?), veteran classic band Hat Trik, local cover party band Obsession, and ten-piece local band The Reptiles opening the festivities at 2:00 PM. Of the bands playing before Full Circle, only Moneypenny, Hat Trik, and The Reptiles were not among last year's main stage lineups, so everything should be familiar! Again, this is free and all ages, and check the above links for all current details!

As for the Thursday the 14th, it will be Jazz/Blues in the Park again, with headliners Matt Storch & The Usual Suspects from Cambridge, Ontario, and opening local bands Enviro Gyro, The Bob Jenkins Band, and The Sault Swing Band (the latter two are also returning from last year.) Not metal, but entertaining if you like those genres! Sounds like a great lineup of bands, check out all of the above links for details on these free outdoor shows for what should be another awesome Rotaryfest weekend! I'll keep you posted on the hard rock bands scheduled!

Now to some updates for TOMORROW'S LemmaFest at The Dondee Lanes in Sault Michigan! Firstly, I can confirm that local metal band Great Bodily Harm & local comedy acoustic duo 2PumpChump did indeed swap spots on the lineup, so 2PumpChump were bumped back to 2:00 PM tomorrow and Great Bodily Harm are officially the highest slotted metal band at 8:00 PM, adding to a very heavy stretch of bands from 4:00-9:00 PM! The lineup is now completely official, click here to see the full times! Also, I wanted to go over the uncertainty I had concerning local acoustic band Electric Motor Fish's set at 9:00 PM. While LemmaFest's pages still list them for the lineup, everywhere else (even their own page) implies that a new local band named Swayze Train (get the Trailer Park Boys reference?) will play at 9:00 PM instead. Swayze Train feature half of Electric Motor Fish's lineup, including singer Melissa Strand and drummer Tony Rogers back on bass, with the lineup rounded out by guitarists Mike Libertoski (of Galactic Alignment & The Slackjawed Rats) and Scott Savoie (ex-Insipid Brutality), with Traces frontman Tyler Tidwell on drums. Apparently they play "rock and stuff", but not a lot is divulged. Check the above links for more on Swayze Train!

I still have no clue why Electric Motor Fish are apparently not playing (I assume Fran and/or Mark Blackwood are unavailable), but I have to ask, why aren't LemmaFest promoting Swayze Train as performing? You think a band switch would be addressed if they knew about it. Is it a surprise switch that even promoters don't know about, or is there something none of us knows? I have no clue, but as I hear more, including if I can prove the "metal-ness" of Swayze Train, I will keep you all posted! Remember, LemmaFest starts TOMORROW at noon, admission is $15, click here and here for all current details before you head out! 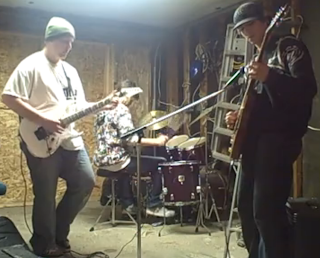 And finally for today, remember earlier today when I mentioned new Bring The Misery guitarist Daeson Lesage? Well, as I alluded to then, he has a bit of a past in local metal bands, and here's what you should know! For at least five months in 2009, Daeson was the guitarist in a local metal band named The Shit along with fellow guitarist Austin Pine and drummer Jordan Dubois. I may be wrong, but I can't recall these guys playing any major concerts outside of high school functions. Austin posted two live videos of The Shit in action onto his YouTube channel, including a jam session cover of Metallica's "The Day That Never Comes" & a live cover of Iron Maiden's "Phantom of the Opera" from what looks like a high school performance (White Pines, maybe?) The Iron Maiden cover sounds better than the Metallica one, which sounds off in quality and timing. There's talent there, but they needed more preparation, an actual singer (and a bassist too). I don't know what you guys will think, but I wonder what happened to them? Check out the two Shit videos at the above links, and here's their "Phantom of the Opera" cover from June 2009!

That's all for tonight, but stay tuned for new Shit Liver videos, my Saigon Hookers review, and much more this weekend! Thanks everyone, and I'll see you guys tomorrow night at The Rockstar Bar!
Posted by The Sault Metal Scene at 11:00 PM