It's weekend concert preview time! I know of at least eight metal or hard rock shows in the twin Saults this weekend, and today's post is dedicated to outlining them all for you guys in a last push to get you to some concert action this weekend! However, we will start with SHORT NOTICE LOCAL CONCERT ALERTS, so here's what you need to know!

I'm really surprised I didn't catch these shows earlier, as they are well advertised, so I sincerely apologize for having these so late. Charlevoix hard rock trio Peril are returning to Sault Michigan THIS WEEKEND for the first time in almost four months, as they rock The Rapids Lounge at Kewadin Casino tomorrow night & Saturday night! These were added to their schedule at some point in the spring, and are officially listed on Peril's sites, so these are definitely a go! Ignore the poster's date of "June 18-19", that would mean they'd be playing on Sunday instead of Friday, and they've since corrected this on their Facebook page's wall. Nice to see them back in town, they're a solid hard rock trio with lots of entertaining originals and covers in store! These concerts will likely start at 9:00 PM, there is no announced cover charge, and you must be 21 to attend. Check the above links for more details! Sounds like a fun weekend, pencil these in if you're across the river! For a preview, here's Peril covering Ozzy Osbourne's "Crazy Train" last year, and stay tuned soon for some more new Kewadin Casino shows!

Now to the rest of the weekend metal previews, all in Sault Ontario, as far as I know! Firstly, it's the 20th Roosevelt Hotel metal night TONIGHT, and given that it's a milestone number, it's only fitting that this is shaping up to be the biggest Thursday nighter that Dismembertainment has ever put on! Originally scheduled to just feature three local bands, we heard the bombshell on Sunday night that Victoria, British Columbia punk legends The Dayglo Abortions had been signed to headline this show! Having played here before, this hard touring crossover thrash quartet will be sure to shock (and rock) with their aggressive & offensive style of punk rock that metalheads are bound to appreciate! The buzz is growing, you'll want to be there early! The previously announced local bands are still scheduled, though with a slightly adjusted order, with local horror punk quintet Frightlight are now the highest listed openers! In what could be their first Roosevelt Hotel show of any kind, their punk/metal hybrid will be a perfect fit as openers for The Dayglo Abortions! Also scheduled are local metal quartet Sativa Rose, who always impress with their classic covers and high tempo originals, and Skull After Betrayal, in their first show since switching to a hardcore style. How will they sound? Come to The Rosie tonight to hear for yourself! 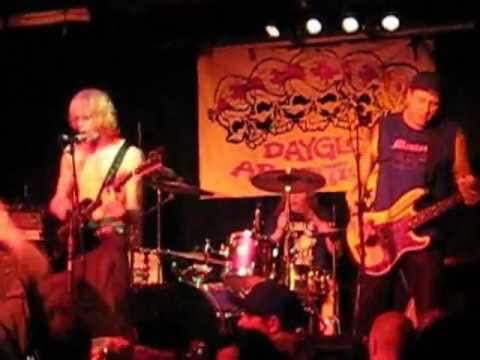 And finally, local grimecore trio Shit Liver have been added as a late addition to open tonight's show! The news was broken last night by Dismembertainment on the Facebook event page, and it'll be interesting to see how they fare on short notice opening up this immense show, the first Thursday nighter ever with more than 4 bands! Doors open at 9:00 PM for this concert, with Shit Liver starting at 9:15 PM sharp! There will be a $5 cover, but it's for The Dayglo Abortions & 4 talented local opening bands, tell me that isn't worth the money! And as always, this is a 19+ show. Check the above links for more details! This is shaping up to be one hell of a concert, and I will absolutely be there to rock out with you guys! My videos may have to be a notch down in quality due to size restrictions (HD videos are huge), but no worries otherwise! Remember, that's The Dayglo Abortions at The Rosie TONIGHT! For a preview, here's The Dayglo Abortions playing their songs "I Killed Mommy" & "I'm My Own God" in Vancouver in 2007!

Then on Friday night, another huge concert is taking place, this time marking a high profile local metal band's return! Local metal quartet Garden of Bedlam will return to the stage tomorrow night for the first time in seven months (and just the second time in ten months) when they hit The Rockstar Bar once again! Activity from them sure has been sporadic lately, but with a new album on the horizon and some scattered out of town tour dates, things are heating up for this summer! No word yet on if we'll get any new tastes of the new album on Friday, but they do have surprise covers in store along with tons of originals! The ground rules for this show seem mostly similar to that same October concert at The Rockstar Bar, including no opening band, a 19+ age limit, no announced cover charge (bring cash with you though), and an 11:00 PM start time. I just hope there's no audio issues like last time! For more details, check out the official Facebook event page! You can bet your bottom dollar I'll be there tomorrow night, I wouldn't miss their big return! Hopefully I'll see you guys there too! For a preview, here's Garden of Bedlam playing their newer original song "With A Spark" in October!

And now, we come Full Circle, literally, as the local classic hard rock quartet returns for their fourth concert weekend since changing their name from Turner Up when they return to The Roosevelt Hotel tomorrow night & Saturday night! Full Circle are no strangers to The Rosie, having debuted under their current name here last month, and will be sure to get fans moving and grooving all night long with their potent brand of classic hard rock covers! Both shows will start at 10:30 PM, there's no announced cover charge, and you must be 19 to attend. For more details, visit the official Facebook event page! This should be another entertaining weekend from Full Circle, though I'd still like to see some posted audio or video of them in action. Spread the word, get people buzzed about them! Their talent speaks for itself though, so go see Full Circle at The Rosie this weekend and rock out!

Finally for the previews, Caveman Morrison frontman Tym Morrison's acosutic solo project returns on Saturday! Tym will bring his own brand of acoustic metal covers back to the local stage for the first time since his bi-weekly Eagles Club shows dried up in March, but uniquely enough, he's playing TWO separate shows on Saturday! First, Tym will rock Service Grill Pizza on Korah Road (just seconds from The Rosie) from 3:00-7:00 PM, before heading to Goulais River to rock The Zone Roadhouse in a show postponed from it's original Friday date. Both look like your usual Tym Morrison solo shows, just with one in the afternoon, and the one in Goulais River at a more usual 8:00 PM start time. Neither show has an announced cover charge, and though I'm not sure about The Zone Roadhouse, I can reasonably assume entry into Service Grill Pizza will be all ages. For more details, click here for the Saturday afternoon show's event page, and here for the Saturday nighter event page. Nice to see Tym breaking out the unplugged set again, hopefully he delivers a double knockout on Saturday! For a preview, here's Tym (and a special guest) covering Extreme's "More Than Words" in 2008!

Posted by The Sault Metal Scene at 3:26 AM